Florida Primaries: What We Saw On the Ground, What Voters Had to Say, And More on Those Polling Place Blood Clinics 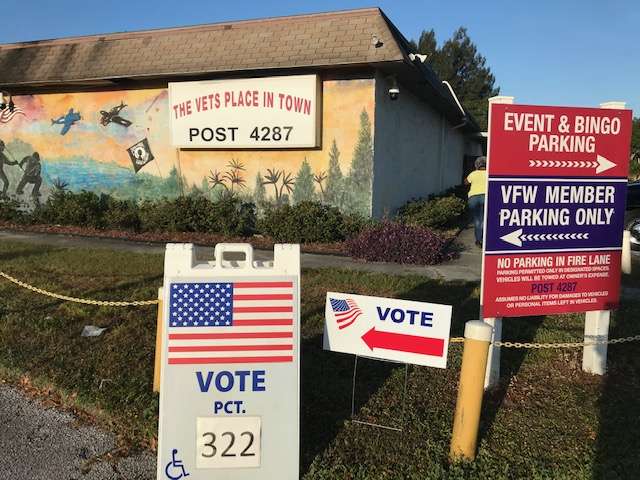 Voters were at polling places throughout Orange County today to cast their ballots in the state’s Democratic presidential preference primary. Voting continued in the shadow of the coronavirus epidemic, and in spite of recommendations from the Trump administration to limit gatherings to no more than 10 people.

Tiffany Rozier wore her green “It’s Your Lucky Day” St. Patrick’s Day t-shirt to the Orange County Supervisor of Elections. She said it made her happy in the midst of rising coronavirus cases.

Rozier brought hand sanitizer with her to the polls to vote for the next Democratic presidential candidate.

George William didn’t go into the Orange County Supervisor of Elections. Instead, he dropped off his absentee ballot in the mailbox outside.

He said he’s had a recent checkup and is in good health. He said nothing would keep him from voting for two open vacancies in city government.

“Even though the president and whatever. But that’s down the line. But right now we got a local election in the historical town of Eatonville. And so we are voting for two council seats.”

Still, coronavirus was on his mind as he cast his ballot.

“It’s a huge part of why I’m here. If we didn’t have the elected leaders that we need, that we felt were the solution to our problems, where would we be?”

Orange County Supervisor of Elections Bill Cowles said the turnout had been light at polling places throughout Central Florida during the Florida primary.

Cowles says they had some volunteers call out, but there were enough backups in place so that sites were fully staffed.

To keep workers and voters safe, he said each polling place had a coronavirus safety kit.

“And so they’ve got wipes, they’ve got gloves. So, we’ve given them limited protection stuff. Again, the voters should be bringing their own stuff to protect themselves.”

Cowles’ office announced voters at two precincts would be relocated to new polling sites as the original sites were near senior living communities. He said this would have gone against Governor Ron DeSantis’ executive order to limit non-essential visits in these places.

“Their corporate management made the decision that they did not want to have outsiders coming into their club house for reasons related to the virus.”

Some Voters Didn’t Just Choose a Candidate, They Donated Blood

Cowles worked with local blood bank OneBlood to coordinate blood drives at four city halls and one polling place during Florida’s primary. One of those polling places was the Pine Castle Masonic Lodge No. 368.

Pete Crotty wore a Drain the Swamp hat and a t-shirt printed with the numbers 45/2020 to vote in the primaries at the Lodge where he’s on the precinct committee.

Then he went over to the red OneBlood bus parked on site to donate blood.

“Right now, during these times, we gotta really pull together and there should be no politics or government and all that.”

Dan Marozzi also voted at the Lodge. He would have liked to donate blood, but he doesn’t pass the eligibility requirements. He’s just had a bone marrow transplant and is in remission for blood cancer.

He said donations of blood and platelets had saved his life. Even though he says he shouldn’t have been out voting, he wanted to support the blood bank and encourage people to vote.

OneBlood spokersperson Susan Forbes says sites where they normally hold blood drives like schools are closed, so they’ve had to come up with new ways to reach donors.

“We’ve seen over 700 blood drives canceled in just the past week which is over 12,000 donations that go uncollected.”

The FDA says there is an urgent need for blood and platelet donors.

To listen to the story, click on the clips.