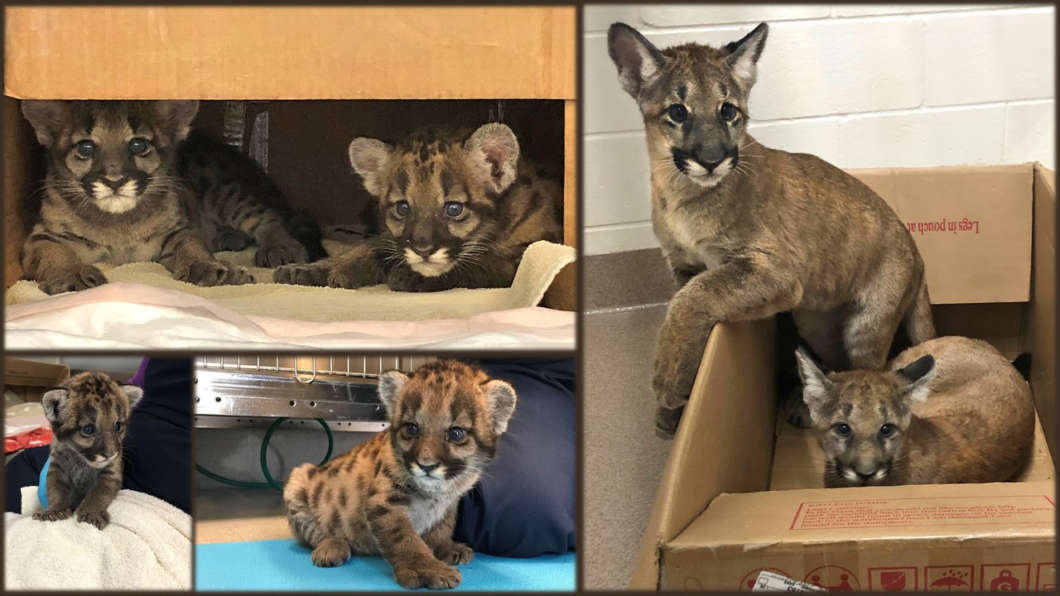 Panther kittens Cypress and Pepper show no signs of the neurological condition that is causing Florida's big cats to walk funny. The cats are about 2 weeks old on left and five months old on right. (CREDIT Florida Fish and Wildlife Conservation Commission and BluePearl)

The panther mother was the second confirmed case of the disorder, but footage from trail cameras suggests more of Florida’s panthers may be impacted.

Once Florida Fish and Wildlife Conservation Commission officials saw that their mother was unable to care for the newborns this summer, they enlisted the help of veterinarians at BluePearl Animal Hospital and ZooTampa to manage the kittens’ constant need for care.

Since she had suffered such neurological damage, the mother was humanely euthanized. But her kittens- brothers named Pepper and Cypress- are now healthy five-month-olds.

Because of their contact with humans, the pair cannot be released back into the wild. Instead, they will remain under observation at ZooTampa where officials hope the brothers will become “ambassadors” for the endangered species.

The Florida Fish and Wildlife Conservation Commission began an investigation into the possible causes of the condition after trail footage showed panthers and bobcats in Collier, Lee and Sarasota counties exhibit similar symptoms.

FWC officials hope that the results of the mother’s necropsy will provide further insight.

“There’s a whole variety of things: anything from a congenital degenerative neurologic disease to toxin exposure, nutritional deficiencies or infectious disease,” said Ayoob. “There is extensive testing of their mother that’s pending but those results aren’t back just quite yet.”

A spokesperson for the FWC said that the commission is following up on all leads and will also reopen past panther mortality cases to compare the symptoms and identify any additional cases that may not have been previously recognized.

“The number of animals exhibiting these symptoms is relatively few,” said FWC spokesperson Michelle Kerr. “However, any disease or condition impacting multiple animals is definitely a cause for concern and our increasing monitoring efforts will hopefully lead to new sightings.”