Florida manatees haven’t recovered from starving last winter, and the places that care for them are maxing out says federal agency 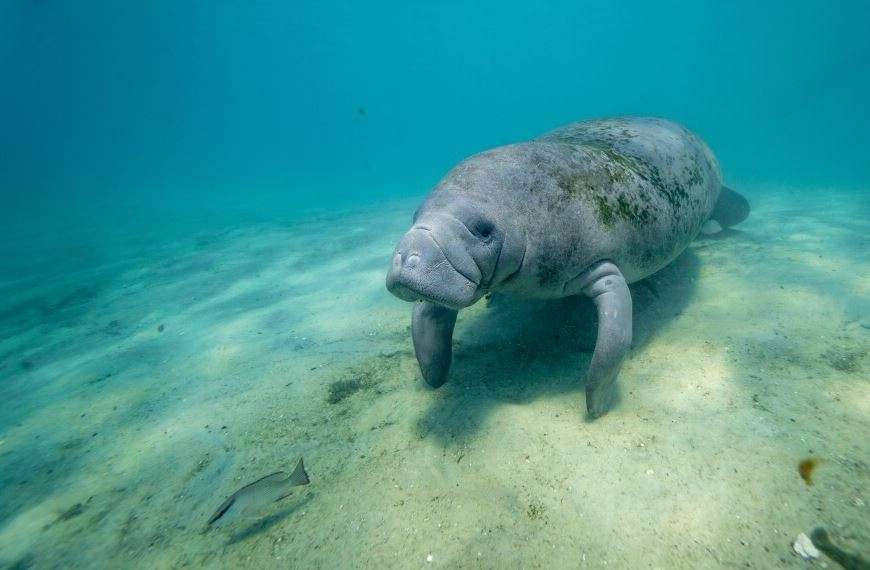 Manatee rescue and rehabilitation groups don't have enough space to care for the rising number of sea cows that need help. That's according to U.S Fish and Wildlife Service. The agency is co-leading a team to coordinate moving manatees from one facility to another, among other responsibilities. (Phillip N. Lowe/Adobe Stock)

A team led by the U.S. Fish and Wildlife Service and Florida Fish and Wildlife Conservation Commission is working out the logistics of manatee rescue and rehabilitation. Its goal is to curb sea cow deaths. Already, more than 1,000 have perished this year.

The team was formed earlier this month as part of an emergency response to the massive die-off of Florida manatees. During a phone interview, U.S Fish and Wildlife Service spokesperson Chuck Underwood told WFSU that the team will not replace the groups already working to rescue and rehabilitate Florida’s sea cows.

“These folks know what they’re doing. That system works really well on its own,” Underwood said.

But Underwood said the groups trying to save Florida’s sea cows don’t have enough critical care space for the rising number of manatees that need help. So one of the team’s responsibilities will be helping coordinate moving manatees from one facility to another. He compared the situation to that of a hospital.

Most of the manatees that died in 2021 starved to death earlier in the year when the waters were still cold. Underwood said temperatures below 60 degrees are intolerable to manatees, so they’re dependent on warm water spots. But some of those places have little food due to algal blooms caused by pollution. Underwood said once manatees find a place they like in the winter, they will keep returning there even if there’s little food. He said already, some of the creatures have returned to those spots.

“We know that seagrasses in those areas have not recovered significantly, so we have animals coming in already somewhat stressed. Their bodies haven’t fully recovered from starvation, and now they’re back in an area that doesn’t have a lot of seagrass in it, and the water temperatures are dropping. So that’s going to make them susceptible to cold stress and mortality,” Underwood said.

Underwood said more manatees are expected to die but wouldn’t speculate how many would be lost this upcoming winter. However, the team co-led by his agency will continue monitoring spots like the Indian River Lagoon, a critical manatee habitat that’s lost a significant amount of seagrass, and look out for manatees that need help. Right now, Underwood said the team is identifying the resources people working on manatee rescue and rehabilitation need and providing those resources to them. In addition, the team is in close coordination with other agencies to discuss how to restore the Indian River Lagoon. One thing Underwood stresses to the public is not to feed manatees.

“If and when we decide to do something like this, it will be a very controlled situation, and you’re not necessarily helping because you may give them something that’s not good for them and make things worse,” Underwood said.

Instead, he directs those wishing to help Florida’s manatees to the Florida Fish and Wildlife Conservation Commission’s website to learn ways they can help the threatened mammal.