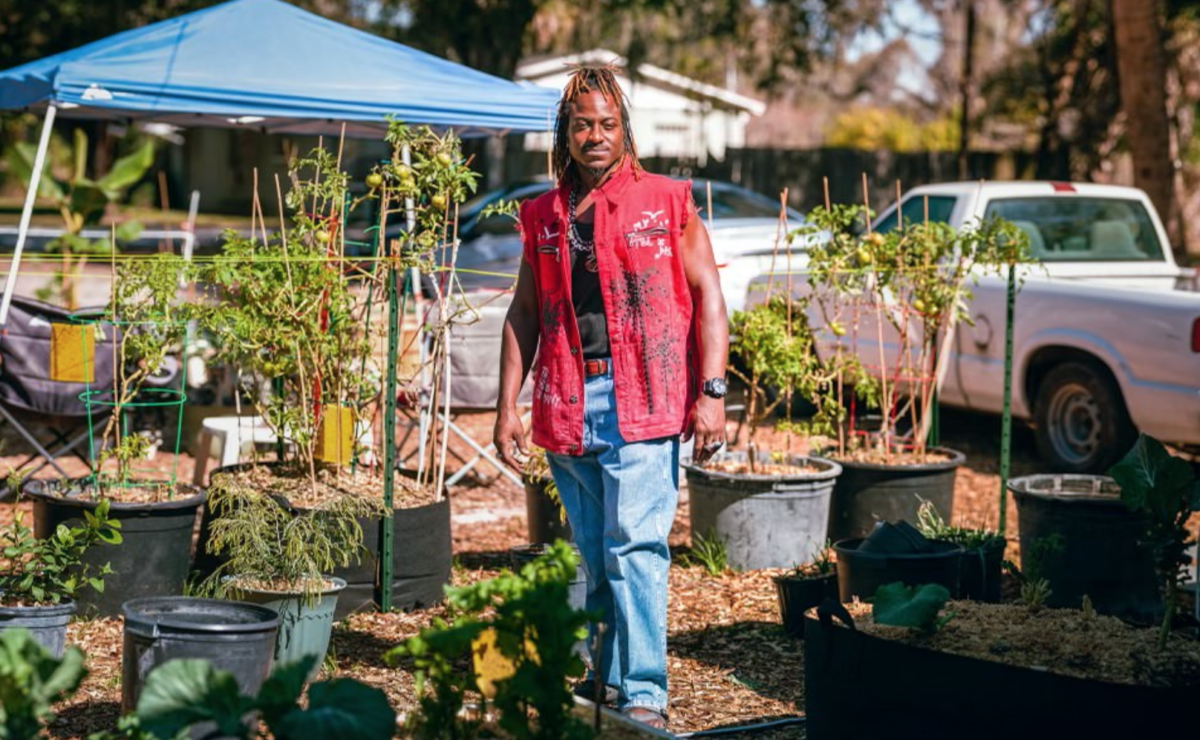 An East Tampa man is gaining notoriety after he used his COVID-19 stimulus check to start a garden at his home.

It’s the second-to-last house on Michael Chaney’s block, just next to a set of railroad tracks that bisect the neighborhood. And now the garden has an official name.

“Hey, this is Spirit Mike. You’re at New World Growers.”

Nearly a year after buying his first fabric pots on Amazon, Chaney – who goes by Spirit Mike – said moringas are still his favorite plant.

“That is the Michael Jordan and the Kobe Bryant together.”

He used to buy moringa in powder form. But now he grows his own. The plant is considered a superfood. It’s high in vitamins and protein and is said to benefit weight loss, blood pressure, heart and eye health. It’s good for strong bones and is said to help fight anxiety and depression. It’s also perfectly suited for a subtropical climate like Florida’s.

“If you were stranded somewhere and all you have is this and water you would not only survive, you would thrive. I don’t work out. All I did was add this to my diet and add flax seed fiber and I lost 65 lbs.”

Before the COVID-19 pandemic took hold of the world, the land around Chaney’s house was barren. But as lockdowns came and supermarket shelves went bare, Chaney started to think of survival. When he went to the store, most groceries, especially the produce, was gone. He saw people arguing and fighting over household basics like bleach.

He’d toyed with the idea of gardening before, even buying a tomato plant from Home Depot. But it didn’t last too long. With the pandemic he had the time and the motivation. Now, he also had a little starting capital.

Chaney used his first stimulus check to buy some pots and a new tomato plant. He went to the internet for some advice on gardening. And for supplies he headed to Plant City where he found A Land of Delight Natural Farm. There, he was able to get materials, advice and learned he could even buy plants with food stamps. Chaney said he never knew he could do that and hopes if more people use food stamps to buy food sources, fewer people will need that government assistance.

“If I can use my food stamps to get an orchard, then I could use that orchard money to get off food stamps and survive.”

At maturity, Chaney said his garden will give him all the nutrients he needs to survive. He’s got mustard greens, collard greens, ghost peppers, his beloved moringas, strawberry guava, cashew apples, lemon, yucca, lettuce, sugar cane and much more.

He’s added a chicken coop with nine hens that produce dozens of eggs weekly. Food waste? He buries it to grow more or composts it for plant fuel.

“I’m doing a food independence movement. When we do have to get stuff from the market I take the bottoms of them off and they always come back.”

None of Chaney’s plants are permanent additions. He’s a renter. He had to make sure everything was mobile and removable. He also had to make a lot work in a little space.

For that, he turned to biointensive gardening and dwarf plants.

“That’s putting a lot of fruits and vegetables in a small space. What I have here is condensed, the amount of food you need for a home. And a community. Because it’s gonna expand.”

According to a Cornell University study, the U.S. loses about 1.7 billion tons of farmland every year. With the population booming, researchers fear Earth will soon have more people than food to support them. One of the remedies could be biointensive agriculture. It’s the idea of planning a small farm or garden where deep soil prep combines with close spacing, composting directly in a garden and planning what you have to support what you need. Combined with dwarf plants, which produce smaller yields quicker, someone could theoretically grow all they need for survival in a relatively small space.

That’s exactly what Chaney is doing.

He’s also started to spread the knowledge he’s gained throughout the community. He gives some of his produce away so people can learn the potential and value of becoming a producer rather than just a consumer. He’s even started teaching and helps others in the community start their own gardens. He’s now trying to raise $2,000 through GoFundMe to continue growing and expanding the garden.

Chaney said he hopes to have the biggest impact on the neighborhood’s children. A felon since the age of 16, Chaney, now 42, spent almost 12 years in prison. But he hasn’t let that slow down his positivity or hope. He’s been out nearly a decade and good behavior got him off probation early. Even if he reaches his goal of getting himself a few acres in East Hillsborough, he said he’s keeping that first garden on 23rd Avenue right by the train tracks.

Keeping kids healthy and off the streets is the big goal.

“If all of your successful people move out of a community and all you have is the dredges, what do the kids have to look up to?” he said. “So I’m staying. I’m gonna get that land but I’m still gonna stay because the kids need a positive role model to look at. They need a place.”