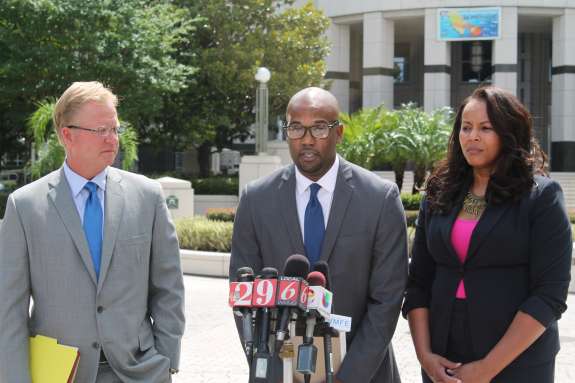 Lawyers for a man accused of resisting arrest filed a complaint today against the Orlando Police Department for excessive force.

30-year-old Noel Carter alleges two officers stopped and assaulted him last Thursday. They were off duty at the time.

Cell phone video shows Carter lying on the sidewalk with the officers kicking him.

“I was shoved. I was sprayed, and I was essentially battered prior to any conveyance of what my disorderly conduct could have been,” Carter said during a press conference at the Orange County courthouse.

Orlando Police Chief John Mina has turned the case over to the Florida Department of Law Enforcement to investigate possible criminal charges.

“What you see in those seconds of that video is only a small piece of what happened,” he said.

Carter has been charged with battery against the police.

The officers remain on duty.