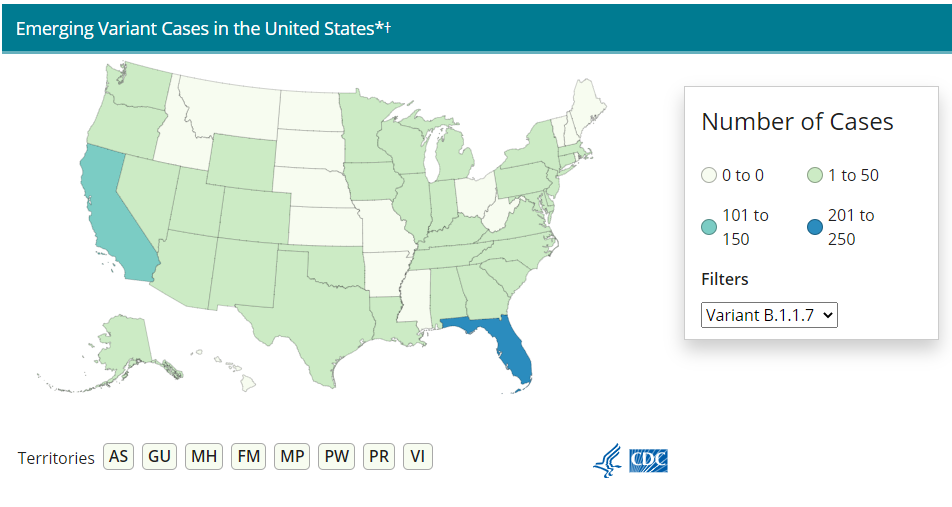 Florida reported 201 cases of the U.K. variant, the most in the country followed by California, which reported 150. (via Jacob Wentz/WUSF_

A highly contagious variant of COVID-19 is spreading faster in Florida than any other state.

The state reported 201 infections of the U.K variant, known as B.1.1.7, as of Friday. No other state in the country has as many cases and only California, with 150 cases, comes close.

Researchers estimate that cases of the U.K. variant double every nine days in Florida. Given that trajectory, the U.K. variant is expected to quickly become more prominent than the first strains of COVID-19, said Michael Teng, an associate professor of medicine at the University of South Florida.

“By the beginning of March, Florida’s dominant strain will be B.1.1.7,” Teng said. “That means that greater than 50 percent of our positive cases will have been infected with this B.1.1.7 variant.”

According to a recent study, the U.K. variant is 35 to 45 percent more transmissible than other strains of the virus in the U.S.

The variant emerged with a large number of mutations, which researchers suggest may account for its high rate of transmissibility.

“It’s unusual to see that many mutations come up all at once,” Teng said. “Some of these mutations appear to have made this variant more transmissible.”

The 201 variant infections in Florida were found in a sample of 4,224 COVID-19 specimens, a positivity rate of 4.76 percent.

That’s up from about two percent of cases in Florida a month ago, according to estimates by Helix, a California-based diagnostics company. The company is responsible for sequencing 167 of Florida’s variant cases.

“We’re getting up towards close to 8 percent of the samples that the companies testing are this B.1.1.7 variant,” Teng said. “It was hovering around two percent last month. So it’s really starting to ramp up now.”

In an email, officials from the Florida Department of Health said the state is leading the nation in sequencing for mutations of COVID-19.

“By leading in sequencing, the Department is actively looking for the variant in Florida, which is why more cases are being discovered in Florida,” officials said in the email.

Officials at the Centers for Disease Control and Prevention said they are unsure how the variant may affect existing therapies, vaccines and tests, but early results from Moderna suggest its vaccine is still effective against the strain.