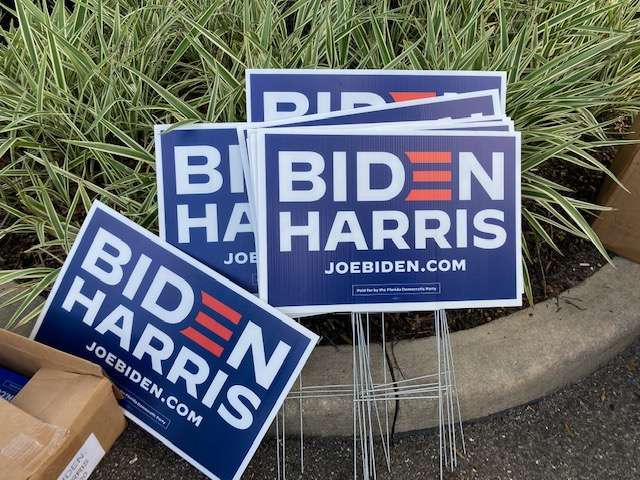 Former Vice President Joe Biden and California Senator Kamala Harris have won the race for the White House. The Trump campaign is still contesting the process in several states, including Pennsylvania, with baseless claims that the election is being stolen as legitimate ballots continue to be counted.

Florida lawmakers react to the news and reflect on what the next administration may mean for Florida.

Randy Fine said the election is over when states certify their results.

“I think the odds are good that that Joe Biden will ultimately win,” said Fine.

“And I want to be clear, if he does, I hope that every Republican will not do what many Democrats have done for four years and say, “not my president”; he will be my president. He will be all of our presidents. But I just I caution folks, given the closeness of the results, to allow that process to work itself through because there are some issues that are concerning out there.”

Fine said other states should look to Florida as an example of how to run an election.

“The fact that the third largest state in the country could count 75% of our ballots, which came in early and absentee and report them within minutes of the election polls closing on election night, these other states just have no excuse,” said Fine.

Election officials in Michigan, Pennsylvania and Wisconsin were not able to start processing absentee ballots until election day because of state laws.

Democratic political analyst Dick Batchelor said Biden will have to work hard to bring a divided country together.

“So it’s going to be really incumbent upon him, no pun intended, to put together a very strong cabinet, a very strong administration, and also make it bipartisan, bring in some former senators from Republican Party and maybe some cabinet members from the Republican Party and really make every overture we can to try and bring this country together.”

“People get sick and tired of the back and forth, the partisanship and the polarization of this issue, which you know, which should have never gotten to that place. But when the President did not show leadership, at this point in time, people rejected it, and that’s why they rejected him for another term.”

“All this infighting? It does nothing. Throwing people under the bus? It does nothing. Republicans they look at this as being, ‘Look, they’re infighting. That’s our window to slip through for the touchdown.’ We have to show, to have a unified effort for the next two to four years. The next election starts today.”

Republican political analyst Frank Torres said the GOP in Florida needs to get away from partisan politics.

“I think Gov. DeSantis needs to get back to what got him elected in 2018, a very broad, you know, almost bipartisan platform involving issues like medical marijuana, the environment. And, you know, I think we can do some soul searching as well. You know, we used to be gentlemen and lady negotiators and policymakers. So it’s important to get back to that and try to find ourselves.”

Congresswoman Val Demings said the election of Biden and Harris has put the country “on track for a more perfect union.”

“President Elect Biden has the relationships in the Senate, you know, we’ve been able to maintain control in the house. I am very hopeful that we will be able, Republicans and Democrats, independents, and the like, we’ll be able to come together and get things done on behalf of the American people, without the President of the United States really creating a divided environment.”

Demings said the historic election of the first African American woman to the vice presidency is worth celebrating.

“This was an election that girls of all colors, and backgrounds can celebrate. This is any election that every man woman, boy and girl should celebrate as America lives up to its greatness and to its promise. So I’m overjoyed at this election and Kamala Harris’s ascension to the vice presidency.”

State Sen. Janet Cruz said the Biden/Harris campaign was damaged by messaging from the Trump campaign around the specter of socialism.

“We saw what was happening in South Florida,” said Cruz.

“We saw the socialist communist message resonate months before we addressed it. And, you know, I think we kind of go back to the fact that, I would say the republican strategists, did a very good job here. They stayed on message, they hit it hard.”

Cruz said by the time the Biden campaign responded, “it was too late… to shed the lies of socialism.”

At the state level, Cruz said its hard for Democrats in Tallahassee to make progress.

“Experts will tell us that government functions at its best when…we’re not lopsided. You know, we lost five seats in the House, but we’re at about 41 members out of 120. So any piece of legislation that they want to run through the house, they can. We’re closer in the Senate, but we still can’t stop it.”

“I think it’s pretty clear that Florida, as a state, did not perform the way that we wanted it to be when it comes to delivering the White House to the Democratic Party,” said Eskamani.

“Florida was not the state that shines. It really was our our sister states across the country.”

Asked about whether she is considering running for Governor, Eskamani said it’s “definitely something we’re taking seriously.”

“We won two Trump precincts, those are two precincts in my district who voted for Trump and voted for us,” she said.

“So I think that there is a path where we can build a Democratic Party, that’s a rainbow coalition that can attract folks of every background and we’re definitely looking at all the options in front of us to see what makes the most sense for the people of Florida.”