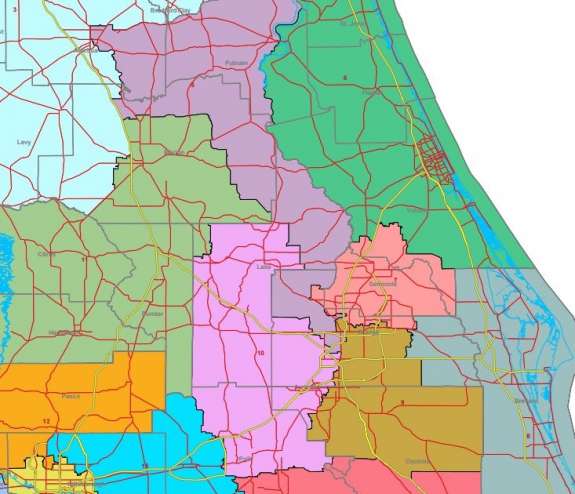 Congressional maps in Central Florida will have to be redrawn. Image: FloridaRedistricting.org

Florida lawmakers are heading back to Tallahassee – to draw up new congressional maps. That’s after the Florida Supreme Court ruled the current maps unconstitutional.

The Supreme Court said the maps were the result of gerrymandering and ordered new maps be drawn up by October.

Eight districts will have to be redrawn, including US Rep. Corrine Brown’s district 5, which includes parts of Orlando.

“I think there’s going to be a huge shake up,” said Fineout, noting  former Florida Governor Charlie Crist now says he’s going to run for a congressional seat in Pinellas County if the redrawn district includes his home.

And he said redrawing Brown’s district could have a knock-on effect.

“What does that mean for Gwen Graham, the daughter of former Florida Governor Bob Graham, who just got elected and took out a Republican incumbent?” he said.

“Because if you take Corrine Brown’s district and move it over towards Tallahassee, that takes away Democrats who might have been in Graham’s district.”

Florida lawmakers will begin their special session to redraw the maps on August 10th.