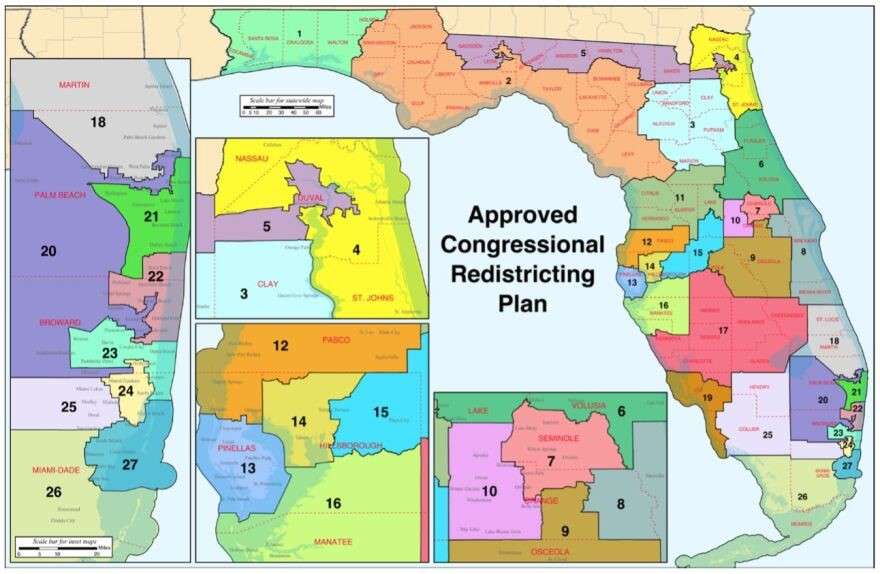 A special session of Florida’s legislature begins today, as the state House and Senate try again to hammer out new congressional maps.

But Governor Ron DeSantis rejected bipartisan maps from lawmakers earlier this year, in a fight that’s largely focused on a north Florida district represented by a Black Democrat.

Click the Play Audio button to hear their conversation. A transcript continues below.

Prof. Aubrey Jewett: Most political analysts who look at this think that Governor DeSantis was trying to increase the number of Republican held seats in Congress, because he is trying to burnish his Republican credentials for future voters and a Republican presidential primary. And he wanted to be able to say that he helped Republicans take back control of Congress. If you have a Florida congressional delegation that has perhaps four more Republican seats than it had before, then that is almost enough right there to get control of the House of Representatives, because Democrats right now only have about a five- or six-seat lead. So Governor DeSantis vetoed that congressional map that the House and Senate sent to him. And now the House and Senate have basically punted, they basically said, “Okay, the ball is in the governor’s court, we’ll let let him take the lead.” And the governor and his legal team have submitted a new map. So where we’re at now is we’re about to have this special session, and we’ll see if there are actually any changes made to the governor’s map or whether or not the House and Senate will simply rubber-stamp what the governor has done.

Nicole Darden Creston: Let’s talk about the district that Governor Ron DeSantis is targeting in North Florida. He’s saying that Democratic US Representative Al Lawson – who is a black lawmaker who has held that seat since 2016 – DeSantis is saying that Lawson’s district is racially gerrymandered. But there’s some pushback to that, where critics say that it is a minority access district for a reason. Can you talk a little bit about what’s going on there?

Jewett: Yes, currently, Congressional District 5 is a racially gerrymandered district. I mean, I think that’s factually correct. The disagreement is on whether that is legal to do that, or whether it’s unconstitutional to do that. And Governor DeSantis is arguing that it’s unconstitutional. However, based on previous redistricting, not only is it constitutional, it was actually approved and drawn by the federal courts and the Florida courts. So based on past decisions, that district is perfectly reasonable. The Voting Rights Act of the United States, and, I might add, the Fair Districts Amendment to the Florida Constitution, both require that when the legislature is drawing the new maps (or the governor), that the new maps have to allow minorities to select representatives of their choosing, because another part of the Voting Rights Act says that you can’t diminish minority representation. So that basically means once districts have been drawn and established for minorities to elect members of their choosing to Congress, you can’t, in a future map, eliminate those districts. And basically, what the governor’s map does is take an existing four minority access districts for African Americans, and it cuts them to two. And DeSantis is basically arguing that since that district was drawn back in 2015, the US Supreme Court has had another decision about racial gerrymandering in 2017 – a case out of North Carolina. And he argues that decision now affects the way Florida draws maps, or at least that it should, and that this district, although might have been constitutional in the past, is no longer constitutional. That, in brief, is his argument. Definitely, we’ll see a court challenge. In fact, we already saw a preemptory court challenge. There is a federal court challenge already, even before this special session meets. And I assume there’ll be even more after the legislature completes this special session. Whether or not the courts overrule the governor – that is unknown. I will say that if it was 2015, and the rules that were in effect back then were in effect, and the same judges and justices were in office, I could say with 100% certainty that what the governor is trying to do would be struck down. It would be struck down on racial grounds because he’s reducing the number of minority seats for African Americans from four to two, and that would be struck down based on what’s in the Florida Constitution and what’s in the US Constitution and the Voting Rights Act, but it would also be struck down under the Florida constitution if we went to the state court level for partisan gerrymandering as well. And it remains to be seen what the Florida Supreme Court, if it ever got to them, would do, either. Because, again, critics, particularly Democratic critics, have been very concerned, ever since the governor made three more appointments to the Florida Supreme Court, that the Florida Supreme Court would not be as zealous in upholding the Fair Districts Amendment. And now, potentially, we’ll see, as I said, we don’t know – the court battle may be both state and federal, or it might just be only federal. Hard to say.

Darden Creston: How unusual is it for a governor to draw a map, a, and b, for the legislature to say, “Okay, we’re just going to accept and pass whatever map he sends to us.”

Darden Creston: You mentioned that there are two minority access districts that are going away?

Jewett: The other one would be the district US House Representative Val Demings is in right now. Yeah, right here (in Central Florida). So I’m glad you brought that up. US House Rep. Stephanie Murphy’s district in our area would become more Republican – instead of being slightly leaning Democratic, we would lean Republican. But for Val Demings’ current congressional seat, what the governor’s map would do, as I understand it, it still would lean Democratic, but it would have less African American voters. They would be no longer a majority in a Democratic primary in that district. And thus, it would not necessarily be a minority access district anymore, either. The only two minority access districts that would exist in the governor’s map are down in southeast Florida.