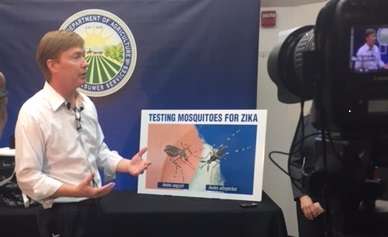 A central Florida lab can now test mosquitoes for the Zika virus.

County workers at Mosquito Control departments across the state can now send mosquitoes to the Bronson Animal Disease Diagnostic Laboratory in Kissimmee. Once there, the insects are tested for Zika and its viral cousins, Dengue and chickungunya.

“So the idea would be that, ideally as early as possible, we would recognize that the Zika virus did exist in the local mosquito population and immediately be able to respond to a very contained geographic area,” Putnam said.

So far, mosquito control departments from Osceola, Seminole, Lee and Hillsborough counties have been sending aedes aegyoti mosquitoes to be checked for the virus, which started doing the testing two weeks ago. Orange County will also begin sending mosquitoes there soon.

“We also have the capability of detecting the specific strain they’ve seen in Brazil,” said Dr. Aissa Sylla, the molecular diagnostics section head at the lab. “If it comes up Zika positive, then we go on to the next test where we’re looking for the specific strain.”

Florida has logged more than 150 cases of Zika virus, including 36 cases with pregnant women. The virus has an 1 to 13 percent chance of causing microcephaly if caught in the first trimester.