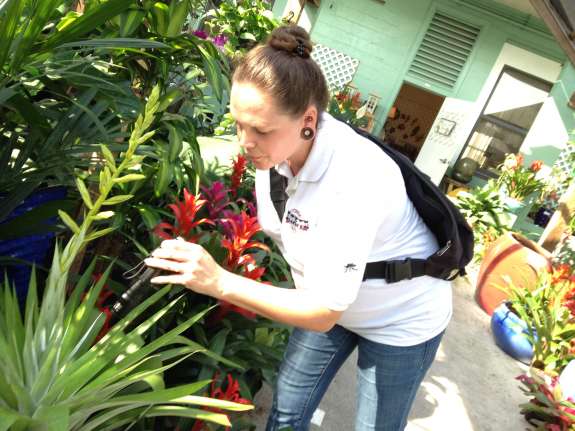 In the fight against mosquitoes in the Florida Keys, domestic inspector Carrie Atwood has a few indispensable tools. She carries a dipper — essentially, a plastic cup at the end of a stick. She has a flashlight for looking into the backs of plants and pots. And she has a turkey baster.

“That’s good for getting into bromeliads, which is a plant that holds water at the base of the leaf,” Atwood said. “We use that to dip in there or just any other kind of tight space where the dipper won’t go.”

The Florida Keys Mosquito Control District deployed domestic inspectors like Atwood to look for mosquito larvae, especially aedes aegypti mosquito larvae, after a 2009 outbreak of dengue fever on the island city. And the effort has been effective. The Keys haven’t had a reported case of dengue since 2010 and have never had a reported case of chikungunya, another disease carried by aedes aegypti.

But the Keys agency is still seeking FDA approval to add a new high-tech weapon to its war against mosquitoes: genetic modification. If the FDA approves, it will be the first such release in the nation.

“If you’re building a house, you put in a sprinkler system not because the house is on fire right now but because, at some point someone’s going to drop a match or something’s going to happen that could cause a fire,” Doyle said. “As far as dengue or chikungunya is concerned, if infected people were matches, there’s matches dropping in Key West or the Keys all the time.”

The Keys have long used aggressive tactics in one of the country’s most challenging places to combat mosquitoes. And it’s not just the aedes aegypti. Outside of Key West, in the more rural areas of the Keys, mangroves and tidal pools breed billions of salt-marsh mosquitoes.

“It’s one of the reasons why people didn’t live much out of Key West for centuries, really,” Doyle said.

The district sends planes and helicopters to spray those areas with larvicide.

“I did the math once,” Doyle said. “We cover an area from Key West to Bangor, Maine each year — a football field wide. That’s the surface area of the water that grows mosquitoes.”

Because of its small population and a large mosquito breeding territory, Keys residents pay the most per capita for mosquito control in the state of Florida, about $160 per resident. That’s more than seven times as much as Pasco County and about 100 times as much as Orange County. Compared to Miami-Dade, the Keys’ closest neighbor, Monroe residents pay 280 times more per person.

Michael Doyle said that’s why his agency is open to new ideas for beating back the insect.

“We grow more mosquitoes per capita than anywhere else in the state, probably the country,” he said.

The genetically modified mosquitoes are bred in a lab in England and would be shipped to the Keys as eggs. The modified male mosquitoes would breed with wild females. The genetic modification kills the offspring before they become adults that sting.

The testing ground for the experiment would be Key Haven, a peninsula with 440 homes about a mile and a half up the road from Key West.

Real estate agent Beth Eliot has lived on Key Haven for six years. She says she researched the issue and opposes the test. She’s concerned that a few genetically modified female mosquitoes could be released along with the males — and female mosquitoes bite.

“Right now, they’re saying they think it’s safe and they don’t think it will pose a problem,” she said. “But I don’t want to be part of that human experiment.”

Doyle said that, while this may be the first test in the U.S., the genetically modified mosquitoes have been tried in other places, like Brazil and the Cayman Islands, and they’ve worked there. He’s hoping they’ll work in the Keys as well, so the district can reduce its reliance on existing technology from turkey basters to helicopters — at least when it comes to aedes aegypti.