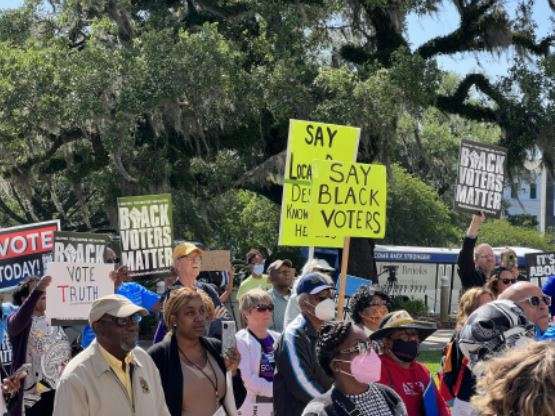 Voters from across Congressional District 5 rally outside the Old Florida Capitol Building on Tuesday, April 19, 2022 in protest of Gov. Ron DeSantis congressional map, which was temporarily blocked by a state circuit court judge about three weeks later. (Valerie Crowder/WFSU News)

A state judge has sided with civil rights groups seeking a redrawing of North Florida’s congressional districts ahead of the midterm elections.

Judge Layne Smith of the state’s 2nd Judicial Circuit in Leon County ruled after a nearly four-hour hearing on Wednesday that the map is unconstitutional because it eliminates a district where African American voters can elect their candidate of choice. The map carved Democratic Rep. Al Lawson’s district into four separate districts with white majorities that wouldn’t typically elect Black voters’ preferred candidate.

Smith agreed with plaintiffs that the new map violated the Fair Districts Amendment, which prohibits the diminishment of racial and language minority groups’ ability to elect a candidate of their choice. The Florida Supreme Court has used that provision to create the “non-diminishment standard,” which means that lawmakers cannot remove a minority performing district without replacing it with another one that gives voters of the same minority group the opportunity to elect their preferred candidate.

Gov. Ron DeSantis drafted the map, which lawmakers then passed and sent back to him for signing. In the northern part of the state, it would’ve deprived an estimated 367,000 Black voters equal representation. DeSantis has argued that the Fair Districts Amendment conflicts with recent U.S. Supreme Court decisions regarding race-based districts. Smith explained that he wasn’t prepared to go along with that line of reasoning at this time.

The preliminary injunction means that North Florida’s newly enacted congressional districts won’t determine where candidates run in November. Smith says he will adopt a replacement map drafted by an expert witness. His formal order blocking the map from taking effect in the midterm elections is expected to come by the end of the week.