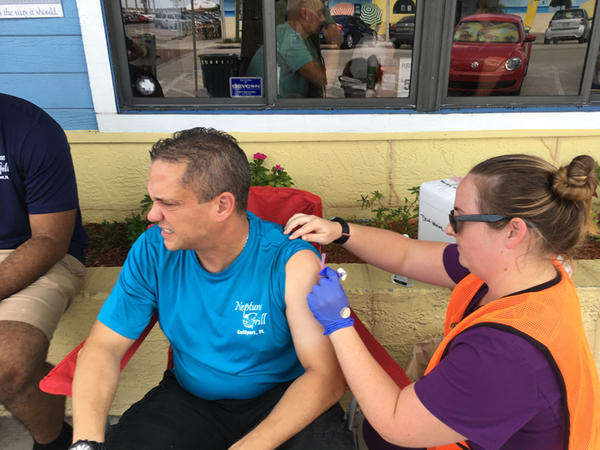 Michele Means, a nurse with the health department in Pinellas County, delivers a hepatitis A shot to a restaurant employee in Gulfport. (Julio Ochoa, WUSF Public Media)

Florida is dealing with the state’s worst hepatitis A outbreak in years and the Tampa Bay area has been hit the hardest. Health officials in Pinellas County are using a new method to combat the virus, which attacks the liver.

On a sunny afternoon along the waterfront in Gulfport two women in orange vests pull a red wagon down a sidewalk.

They work for the Health Department and their wagon is carrying needles and vials full of the vaccine for hepatitis A.

The women are hoping to find homeless people, who are at the highest risk of getting the virus and spreading it.

But as they pass stores and restaurants that line the city’s quaint downtown, nurse Michele Means ducks her head into a bar and asks if anyone wants a free hepatitis A shot.

She gets some confused looks at first and some questions but eventually she has some takers.

“This is amazing,” said Sharon Lee, of St. Petersburg. “I wouldn’t have thought of getting vaccinated if they didn’t come in but I’m glad they did.”

The health department began walking the streets with free vaccinations twice a week in June. At the time, Pinellas was leading the state in the number of hepatitis A cases. It now has recorded more than 325 cases, second only to Pasco County, which has 358 cases.

Other counties where the outbreak is particularly bad include Volusia (179), Orange (140) and Hillsborough (115).

Related: Ongoing coverage of the hepatitis A virus.

The disease is transferred through the fecal to oral route and is often spread when tiny traces of fecal matter make it into food or water.

Ana Urueta, a public health preparedness planner with the Health Department in Pinellas County, says the virus can also live on surfaces for months.

“So the best way to combat the virus is to get a vaccine and to wash your hands thoroughly,” Urueta said. “It’s very contagious and that’s part of the reason why once the numbers start rising it’s hard to contain.”

Folks in Gulfport, especially those in the restaurant industry, have a heightened awareness of hepatitis A. About a week before the health department came through with their wagon, an employee at a local restaurant tested positive for the virus.

When news like that goes public, it can really hurt a business.

Earlier this year the Hamburger Mary’s restaurant chain closed three locations in the Tampa Bay area. At the time, the owner blamed the health department for publicizing a positive hepatitis A test of one of the restaurant’s employees.

So when the health department came calling in Gulfport, managers of some of the restaurants brought their entire staff out to the sidewalk for a free vaccination.

Nico Panagos was hanging with some friends on the patio of a waterfront bar. He knew the Hamburger Mary’s story well. He lost his job there.

“It was the bad publicity,” Panagos said. “When everything happened we were getting horrible rude phone calls. People were like, ‘Oh, if I order a burger, do I get a side of hep A with that?’”

That’s why he got in line on the sidewalk to get a shot.

“I had to deal with the whole hepatitis scandal with Hamburger Mary’s because I worked for them for seven years,” he said. “And now with all the outbreaks that are popping up all of the sudden I figured why not protect myself.”

As a guitarist sings a country song in the background, a line forms at the red wagon where Michele Means and her crew are dispensing shots.

Employees of the Florida Department of Health in Pinellas County load up a wagon with hepatitis A vaccinations to administer them to people on the streets in Gulfport. (Julio Ochoa, WUSF Public Media)

The vaccination is delivered in a two-shot series. The first provides 90-95 percent protection. The second shot, which is delivered after six months provides full protection for at least 20 years.

The health department vaccinated 103 people during the Gulfport trip. In addition to Means and her team, a second wagon team also canvassed the area, while a third set up shop in front of the city’s public library.

Every county in Florida is offering free vaccines to people who are high risk, Baker said.

“That’s what we’re focusing on because those are the populations that are hit hard by this outbreak,” he said.

The Florida Department of Health is providing about 5,000 hepatitis A vaccines a week, officials said.

The health department in Pinellas has taken the extra step of providing the vaccination for free to anyone who wants it.

The county saw its number of reported cases per month peak in March and hasn’t seen an increase since, Baker said.

“We have seen steady decreases since then. Which is good news,” Baker said. “We would say that vaccinations have definitely been making a strong impact on the outbreak.”