Florida has become the GOP’s favorite destination, and not just for its beaches 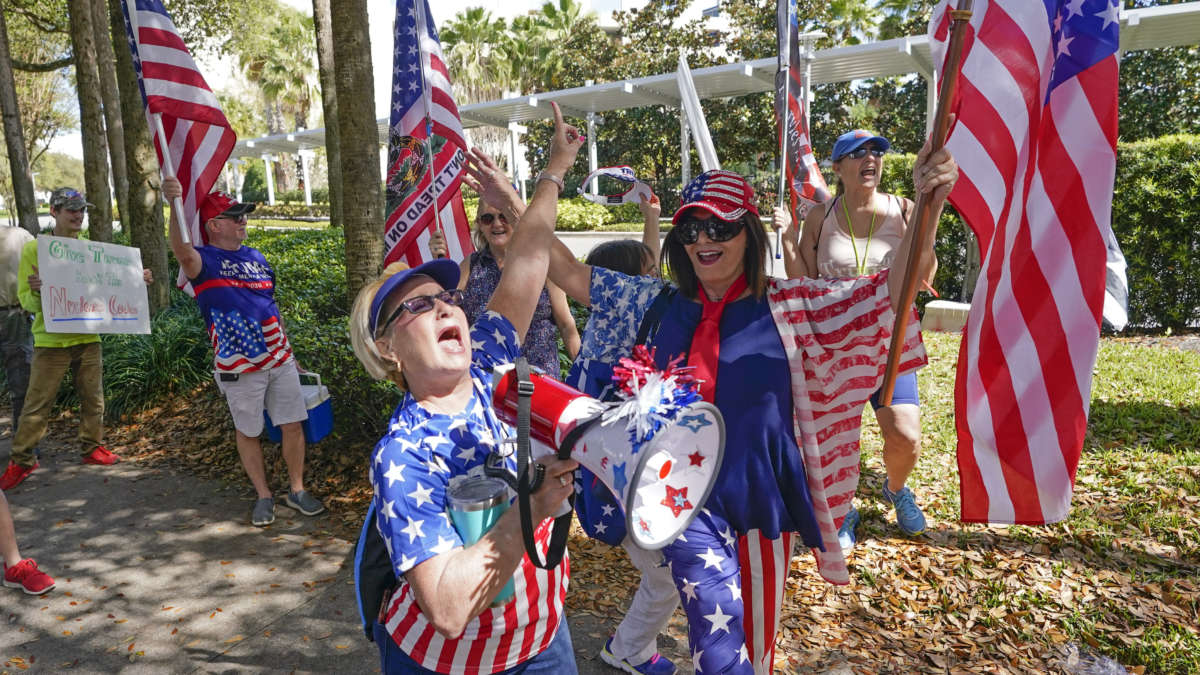 Marcia English, center, leads a group of Trump supporters in a song outside the Conservative Political Action Conference on Feb. 28, 2021, in Orlando, Fla. The conference is returning to Florida this year, along with a number of other GOP gatherings.
Image credit: John Raoux

Florida is a big draw for snow birds from around the country looking for warm weather in the depths of winter. But Republicans are flocking to the state to pick up connections and campaign cash year-round.

Former President Donald Trump is hosting congressional candidates on Wednesday for a big fundraiser at his private club in Palm Beach. On Thursday, CPAC — the Conservative Political Action Conference — opens in Orlando. The annual gathering was in the Washington, D.C., area until last year, when it moved to Florida. So did the House GOP retreat, which is back in the Sunshine State this year.

Among the reasons Republican politicians are drawn to the state, the first is its approach to COVID-19. CPAC chairman Matt Schlapp says that last year Maryland, where the meeting usually was held, forced it to relocate. “They literally shut down the hotel against the hotel’s wishes,” Schlapp said. “And we were left scrambling to find a place to do it.”

Lax pandemic rules are a draw for conservatives

Enter Florida, where Republican Gov. Ron DeSantis has raised his profile within the GOP by challenging Biden COVID policies and fighting vaccine and mask mandates. While other states were still largely shut down, DeSantis lifted all restrictions on businesses, from bars and restaurants, to sports arenas and conference centers.

“People know when they come here, they can actually have a vacation,” DeSantis said at a recent news conference. “Why would you want to go someplace to vacation and then have someone hound you about your medical papers or about your mask or all these other things?”

CPAC rose to prominence over several decades as a summit for conservatives, and for the last decade it’s been held in Maryland, near the nation’s capital.

But Schlapp thinks it may have found a new home in Florida: “Going forward, I think it will be very hard for Maryland to convince us we want to do business in a high-tax state that’s colder, that at any moment the government can decide to shut us down.”

A host of other Republican gatherings have also found accommodations in Florida. There was the Federalist Society meeting recently where former Vice President Mike Pence said Trump was wrong in saying the vice president could have overturned the election. The Republican National Committee has held several meetings here, including a spring donor retreat last year that included a visit to Mar-a-Lago, the private club where the former president now makes his home.

That of course is another reason Florida has become a magnet for conservatives. Mar-a-Lago has become the best place to hold a fundraiser, especially if you’re a candidate seeking an endorsement from the former president.

They’re usually closed to the media, but a video was posted recently by an attendee at a fundraiser for Tudor Dixon, who’s seeking the Republican nomination for governor in Michigan. Attendees chanted “We love you!” as Trump took the stage and made a few comments.

So proud of my years long friend ⁦@TudorDixon⁩, the next Governor of Michigan.

Love that President Trump is out here at Mar-a-Lago speaking on her behalf. pic.twitter.com/xk3gWYEu8k

Trump called Tudor Dixon “very special,” but she hasn’t yet gotten an endorsement.

Republican fundraisers are held frequently at Mar-a-Lago. The Washington Post identified 30 Republican events at the club last year, including fundraisers for at least 20 Republican candidates.

Former Republican political strategist Rick Wilson said, “Mar-a-Lago has become … where you go and grease the palm of Trump to get an endorsement.”

A co-founder of The Lincoln Project who is based in Florida, Wilson has become one of the loudest and sharpest critics of the party under Trump. “People go down there. They pay for a big fancy reception. They pay to rent rooms for parties, events and fundraisers. And there’s the hope that Donald Trump will notice them,” he added.

A fundraiser is being held this week at Mar-a-Lago for a Trump PAC, “Make America Great Again, Again!” It has a top ticket price of $250,000 per couple with an option to purchase a two-night stay at the club.

A supporter of former President Donald Trump waits for the motorcade on the road to Mar-a-Lago, Trump’s Palm Beach estate, as he returned home on the day of President Biden’s inauguration.
Lynne Sladky/AP

Wilson says the new prominence of Florida on the GOP political stage has changed the way ambitious Republicans run for higher office. “Really honestly now, you go to Florida, you go to CPAC, you go to the other big events here, and you’re in a position where you’re well ahead of the national pack,” he added.

CPAC chair Schlapp says there’s another reason Florida has become a favored destination for Republican groups — it’s fun. “What I loved at CPAC is that at breaks, people run and put on their bathing suit and run to the pools,” he said.

There are beaches, theme parks and the weather — the same perks enjoyed by Democrats, independents and people who never even think about politics.