Florida Gov. DeSantis takes aim at what he sees as indoctrination in schools 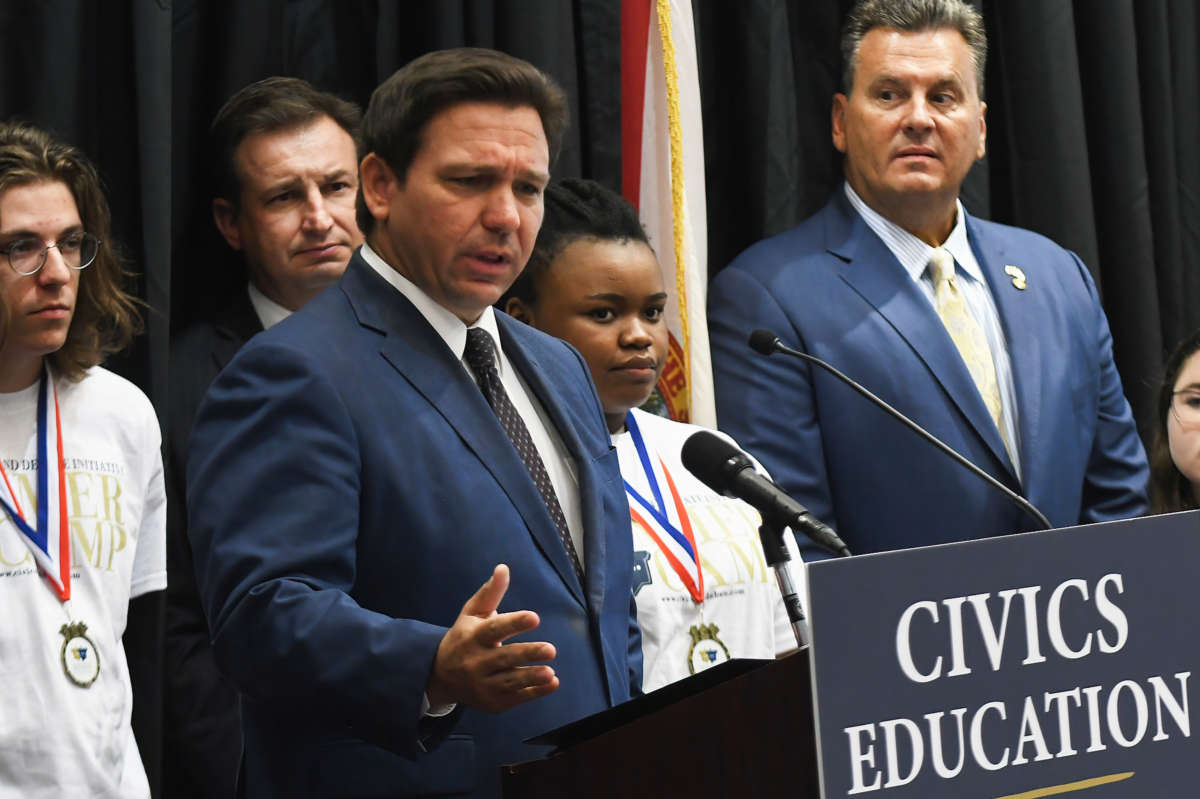 MIAMI — Florida Gov. Ron DeSantis has made it clear how he views public schools and what they’re teaching children: He doesn’t trust them.

At a recent news conference, he returned to a familiar theme.

“Following woke indoctrination in our schools, that is a road to ruin for this country,” he said. “And we’re not going to let it happen in Florida.”

Since becoming governor in 2019, DeSantis has become known for taking combative positions on controversial issues, including education. He recently signed a number of measures aimed at preventing the sort of “indoctrination” he and his Republican supporters fear is taking place.

His “Stop Woke” act sets limits on how issues involving race may be taught. And it allows parents to sue teachers and school districts that violate it.

Another measure, the Parental Rights in Education Act, dubbed “Don’t Say Gay” by critics, bans any instruction involving sexual orientation or gender identity in the earliest grades and says beyond that it must be “age appropriate.”

In a June interview with the Christian fundamentalist group, Focus on the Family, DeSantis said he believes there’s a “concerted effort to inject … gender ideology and sexuality into the discussions with the very youngest kids.”

Critics of the law say that’s not true. They believe the law is part of an effort by DeSantis and Republicans to mobilize the party’s conservative base by targeting the LGBTQ community.

Robert Cassanello, an associate professor of History at the University of Central Florida, says although the law just took effect this month, it’s already had an impact.

“There have been high school teachers that have reported to me that they have been told by their superiors don’t mention gay, lesbian or any sexuality on class,” he says. “Don’t even approach this with 11th and 12th graders. And these were things they had previously taught.”

Cassanello, who teaches civil rights history, is part of a lawsuit challenging the limits on teaching about race that are part of DeSantis’ Stop Woke Act.

DeSantis’ focus on the schools took shape with the onset of the COVID pandemic in 2020, when he began battling with school districts over face masks and other issues. Since then, he’s made parental rights one of his main issues, taking aim at school boards and administrators who he believes need to be held accountable.

In his Focus on the Family interview, he said, “There’s an element on the far left that believes parents really have no role in the education of their kids. You drop them off at school … and they impose the ideology and worldview that they want.”

A kindergarten class at Redland Elementary in south Miami-Dade on Oct. 5, 2020, the first day that Miami-Dade public school students returned to their classrooms due to the coronavirus pandemic.
Jose A. Iglesias/El Nuevo Herald/Tribune News Service via Getty Images

Three professors at the University of Florida sued last year after they were told they couldn’t testify in a lawsuit challenging a voting rights law DeSantis supported. A judge ruled in their favor, but not before the university’s accrediting organization, the Southern Association of Colleges and Schools, opened an investigation. SACS concluded the university met all its standards for academic integrity. In response, DeSantis signed a bill passed by lawmakers requiring universities to periodically change their accrediting organizations.

Cassanello says, “The Florida legislature is removing all accountability in the accreditation system because they’re mad at SACS for taking an interest in academic freedom.”

The state has also asked faculty and students to begin participating in voluntary “viewpoint diversity surveys” to see if conservative ideas are being repressed on campuses.

More recently, DeSantis rolled out a civics education initiative that he says will make sure students in elementary, middle and high schools aren’t taught a distorted view of history.

Barbara Segal, a high school government teacher in Fort Lauderdale, recently took a three-day training session on Florida’s new civics standards. She says, “They were pushing an ideological agenda.” In the training materials, Segal says, slides said it was a “misconception” that the Founding Fathers wanted strict separation of church and state and that they in fact wanted religion to be promoted.

Some of the most jarring material seemed to downplay the role of slavery in the country’s founding, including one that stated that only 4 percent of enslaved people from Africa came to the colonies.

“Which means,” Segal concluded, “we’re not that bad.”

As first reported by the Miami Herald, the training materials were prepared for the state by groups including the Bill of Rights Institute, founded by Charles Koch and Hillsdale College, a small Christian school in Michigan that is influential in developing conservative education policies.

Segal, a teacher with 18 years in the classroom, says DeSantis is pushing a false narrative that schools are promoting a “woke” progressive agenda.

“I hate to say this,” she says, “but I feel that maybe, possibly he’s pandering to a base for re-election and that’s very hurtful.”

DeSantis is running for re-election as governor in November but is also widely seen as a likely contender for the Republican presidential nomination in 2024.

All this comes as Florida is facing a critical teacher shortage with more than 9,500 vacant jobs statewide.

In Brevard County, school board member Jennifer Jenkins says teachers are demoralized. Many have retired or found jobs in other fields. In her district, she says there are 20 vacancies at a single school that only has 40 staff members.

School board members have become a particular target. Jenkins has had protesters outside her home, vandalism, and threats of violence stemming for her support for a school face mask mandate.

DeSantis has now begun endorsing candidates running for school board seats, races that have long been non-partisan. And his gubernatorial re-election campaign has released a survey for school board members that includes questions about parental rights, school choice and critical race theory.