Florida Getting Presidential Attention One Month Before Primary 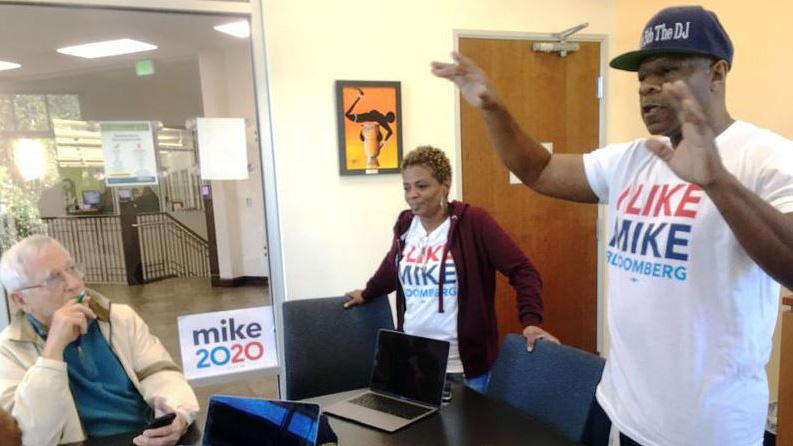 While Iowa and New Hampshire have captured most of the attention of the Democratic nominees for president, Florida is lurking in the background as one of the biggest prizes of all.

Elizabeth Warren’s campaign started canvassing two weeks ago, and volunteers with Michael Bloomberg opened an Orlando field office in early February and another one in Tampa this past Saturday.

During a recent weekend at Henry and Ola Park in Tampa’s Seminole Heights neighborhood, while people played basketball and a pickup baseball game was going on, five people stood in the parking lot, wearing “Warren for President” t-shirts.

“What prompted me to come out and fight for her is her universal child care plan. It’s super important to me,” said Kas Miller, who was joined by her 6-year-old daughter, Lila.

Miller has never taken an active part in a political campaign before, but gestured to Lila as the reason she’s pounding on doors this time around.

The cost of childcare is so prohibitive, she says some women are being priced out of the workplace. She had to quit her job because it didn’t make sense to her to spend $11,000 dollars to have someone watch her children.

She looked at fellow progressive Bernie Sanders, but said his plan wasn’t as good as Warren’s.

She then knocked on doors in the neighborhood, asking them what issues matter to them most.

“I would consider myself a single-issue voter. The issue is kids,” Miller said. “They don’t get to speak for themselves, they are the most vulnerable among us, so if there’s a candidate I feel that really does the most for the most children, I have the privilege that I can walk around and take the time to knock on people’s doors and say, ‘Hey, if this issue matters to you, let me tell you about it.'”

Miller says the tag Warren has as being too politically left is a very subjective matter to the people she’s talked with.

Warren for Florida organizer Kevin O’Hare rallied the small group before they knocked on doors.

“What we’re doing right now is we’re asking voters two questions. Number one, the issues that are important to you, and number two, what candidate they may be supporting in the Democratic primary,” he said. “We are fortunate in that we are the only campaign knocking on doors in this neighborhood right now, so for a lot of folks, this is their first door of the election, so they’re like wow, this is awesome.”

One week later, another tiny group jams into a room at a public library on Nebraska Avenue, between Ybor City and downtown Tampa. They’re greeted by Edrien Wright, wearing an “I Like Mike” T-Shirt.

“We’re just trying to do everything we can to really get the word out, really get the presence out,” he said. “I’m going to talk to as many people as I possibly can today, get them to sign up for future events, and just build and add on to the movement that’s going on right now. ”

Bloomberg is targeting black voters, who make up nearly one of of every three registered Democrats in Florida. He just started a “Mike For Black America” tour, targeting a demographic that is also being courted by former Vice President Joe Biden. Biden just announced the launch of several grassroots coalitions in Florida.

Half the people at the Tampa meeting were African-American – including Wright.

“Mike, from what I’ve gathered, and the things that I’ve learned from him and the people that worked for him and lived in New York, everything that we lack, Mike has actually done,” he said. “He’s injected money into the inner city. He revitalized New York.”

Bloomberg entered the race late, and wasn’t in the early debates or the first four primaries. He’s focusing his energies on the Super Tuesday states – two weeks before Florida’s primary – but is making the state a centerpiece of his campaign strategy.  He’s already spent millions on TV ads.

MacManus says she’s heard from a diverse group of people recently who are backing Bloomberg. But she says his campaign is flying in the face of the party’s ascendant left wing.

“There is a downside to Bloomberg’s wealth and not taking anything, and that is the young progressives, when one of their high priorities is narrowing the wealth gap,” she said. “So we’ll see.”

Usually, by the time Floridians get to cast a ballot, the nominees have long been decided. But MacManus says Democratic voters here may actually get to make a difference.

“When you have this many candidates, and they’re all going to draw some votes and the requirement is that each delegate has to get 15 percent, that’s not going to get done before it gets to Florida,” MacManus said.

MacManus says for all of the Florida Democrats who were worried that they weren’t going to be of consequence, guess what – they are.

This story is part of the I-4 Votes project, a collaboration between the NPR stations in Tampa and Orlando. The project will spend 2020 focusing on the issues that matter to voters as they decide who they want to be President of the United States.