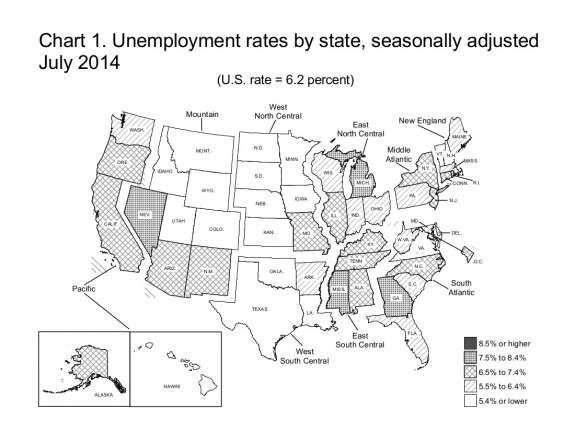 Bureau of Labor Statistics chart of unemployment rate by state

Florida’s job gains and unemployment rate drop over the past year are statistically significant – and positive.  A report out Monday from the Bureau of Labor Statistics compares state changes from July 2013 to last month.

Florida’s unemployment is down from a year ago, but it has flattened out recently.  90.7’s Economic Analyst Hank Fishkind says that’s actually a good thing.

“The unemployment rate isn’t going down, even as jobs are going up, but that’s positive,” he says.  “More people are becoming of the view that the labor markets have gotten so much better that now they can return to the labor market and find employment.”

Fishkind says the state’s good news can look bad on paper.  State unemployment leveled off as the national rate continued to decline.  Now, the numbers are tied at 6.2 percent.

Florida’s yearly job growth is the nation’s third-highest at 208,500 positions.  Despite a state report showing losses between June and July, Fishkind says the overall trend is positive.  “The jobs numbers have accelerated at the statewide level to over 200,000 new jobs on a year-over-year basis each and every month so far this year, and, what has happened, therefore, is we’re attracting more people into the labor force,” he says.