Florida Elections For Governor And U.S. Senate Heading For Recount 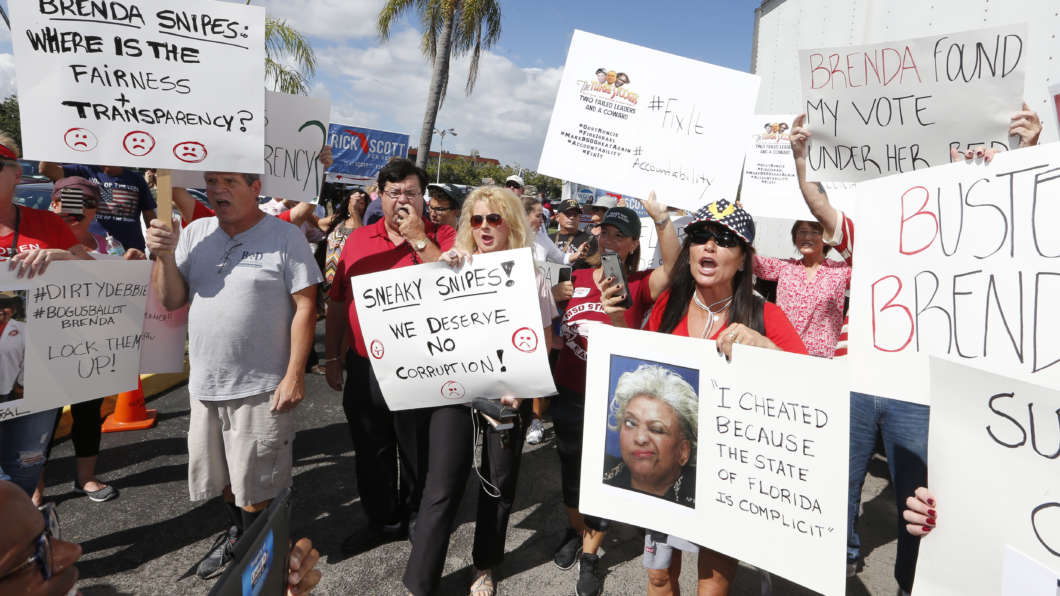 Crowds gathered outside of the Broward County Supervisor of Elections this week in Florida. The elections for governor and U.S. Senate are heading for recounts.
Image credit: Joe Skipper

Two top elections in Florida are heading for recounts, with voters almost evenly divided on candidates in the state’s races for governor and U.S. Senate. Unofficial vote tallies from all of Florida’s 67 counties were turned in at noon on Saturday, and the narrow vote margins triggered machine recounts, which must be completed by Thursday.

The most acrimonious of the elections may be the U.S. Senate race between Republican Gov. Rick Scott and incumbent Democrat Bill Nelson, which will have national consequences. If Scott is able to retain his lead, it would expand the Republican majority in the Senate, which currently stands at 51 seats.

Nelson has filed a federal lawsuit asking to postpone the deadline for submitting election results, and a motion over the process of validating signatures on provisional and absentee ballots.

President Trump weighed in with support for Scott, calling the potential for a recount a “fraud,” and referring to one of Nelson’s attorneys, Marc Elias, in a tweet on Saturday.

In the race for governor, a congressman allied with Trump, Republican U.S. Rep. Ron DeSantis, is facing off against Andrew Gillum, the Democratic Mayor of Tallahassee. DeSantis’ lead has narrowed to .41 percentage points — about 33,000 votes.

Gillum initially conceded the race on election night, but as the voting results narrowed, asked that every vote be counted.

“We traveled all across this state in the primary and the general process. We went to red areas, and to blue areas, and to purple areas of this state, and I fought hard for every single vote that we got,” Gillum said at a news conference on Saturday. “I fought hard even for the votes that I didn’t get, and in this process, I am fully committed to seeing every one of those votes counted.”

The disputes in Florida’s elections recall the swing state’s 2000 presidential recount, when the election for U.S. president was delayed for several weeks over hanging chads.

Political consultant Matthew Dowd worked on George W. Bush’s campaign for U.S. president that year, and tweeted, “Not counting all the votes in Florida in 2000 was a grave injustice and caused many to question the legitimacy of Bush election. Let us not repeat that injustice in FL and AZ this year. Count all the votes.”

Trump has called into question the validity of the recounts, saying in a tweet, and without evidence, that they are an attempt to steal Florida’s big elections.

Results of the machine recount in Florida may trigger a hand recount, which would have to be completed by Thursday, Nov. 18.