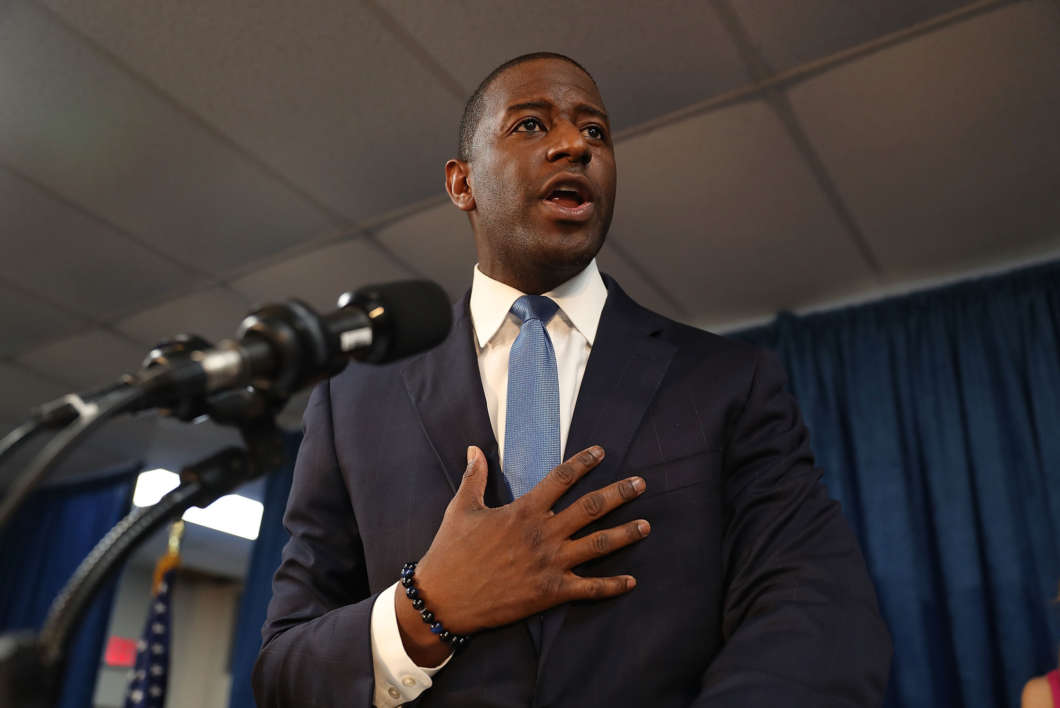 Racist robocalls targeting Andrew Gillum, a black Democrat gubernatorial nominee in Florida, went to residents throughout the state recently in an apparent attempt to influence voting.

The 39-year-old Tallahassee mayor and upset candidate is the first black nominee from a major party for Florida governor.

The robocall message, obtained by NPR, is narrated by someone pretending to be Gillum. The narrator uses an exaggerated minstrel dialect — featuring phrases like “We Negros” — with jungle noises in the background. The calls end with a disclaimer that they were paid for by The Road to Power, a neo-Nazi, anti-Semitic podcast operated by Scott Rhodes of Idaho.

In Florida, robocalls supporting or opposing non-federal candidates or ballot proposals need a financial disclaimer — as well as a registered agent in the state, which the Idaho-based calls may not be able to prove. The FCC also says that robocalls must “state clearly the identity of the business, individual, or other entity that is responsible for initiating the call” at the beginning of each message — rather than impersonate someone.

The same group is linked to robocalls sent out last week that used the death of Mollie Tibbetts to promote white supremacist messages, according to the Iowa Starting Line. Tibbetts, a University of Iowa student, disappeared on a run in July. Her body was discovered more than a month later. The suspect in her killing is an undocumented immigrant from Mexico. The Starting Line reports the call said, “If after her life has now been brutally stolen from her, she could be brought back to life for just one moment and asked, ‘What do you think now?’ Mollie Tibbetts would say, ‘Kill them all.’ ”

Tibbetts’ father Rob Tibbetts wrote an op-ed in the Des Moines Register on Saturday, decrying the right-wing punditry around his daughter’s death. “Do not appropriate Mollie’s soul in advancing views she believed were profoundly racist,” he wrote.

The same podcast has also been linked to robocall campaigns in Charlottesville, Va., Oregon and California, according to Right Wing Watch. The Tallahassee Democrat reports that calls have previously used “the local area code and prefix followed by a four-digit number associated with neo-Nazi rhetoric.”

Over a billion robocalls head to landlines and cellphones every month, reports Planet Money. Many of them appear to be from a line that has the recipient’s same area code — but are really scammers or spammers “spoofing” their real number using the Internet. Experts tell NPR that it costs around 1 to 5 cents per call.

Last week, GOP Florida gubernatorial nominee Ron DeSantis was criticized for comments some said amounted to racist dog whistling. “Let’s build off the success of Gov. Scott. The last thing we need to do is to monkey this up by trying to embrace a socialist agenda,” DeSantis said. A spokesperson for the candidate later said the comments were not racially charged.

Gillum told CNN he “will continue to focus solely on the issues that Floridians care about and uniting our state.” A spokesperson for DeSantis said the calls were “absolutely appalling and disgusting.”

“What I don’t want the race to turn into is a race of name calling,” he continued. “I want to make sure that we don’t racialize and, frankly, weaponize race as a part of the process, which is why I have called on my opponent to really work to rise above some of these things.”