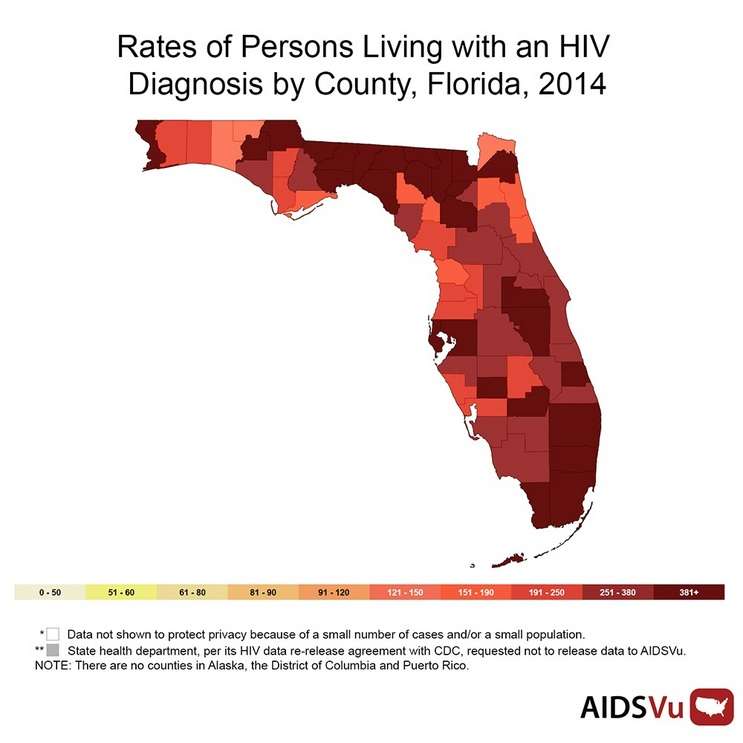 Rates of persons living with HIV 2014

When Arianna Lint, was diagnosed with HIV in 2006 at the Orlando health department, she didn’t know much about the virus, but thought it was punishment for being a transgender woman. Now she helps other HIV-positive transgender women of color like herself overcome stigmas and stay healthy, sometimes picking up their medications at the pharmacy because they don’t want to be misgendered or helping people get hormone treatments along with their HIV medicines.

She and other advocates want Florida to do more when it comes to the HIV crisis ravaging the state. Although HIV rates have plummeted nationwide, Florida had the second-highest rate of new HIV diagnoses among adults and adolescents in 2015, according to federal data. Unlike the focus on AIDS during the ’80s and ’90s, advocates say Florida’s epidemic is silent, with little attention paid by the public or state lawmakers in terms of increasing funds for testing and care, after years of cuts to the health department. A spokesperson from Gov. Rick Scott’s office says he recognizes the importance of providing a robust response to combat HIV/AIDS.

State Rep. Carlos Guillermo Smith from Orlando, says there was a less than 1 percent increase from last year in the $285 million dollars in federal and state funding for HIV/ AIDS.