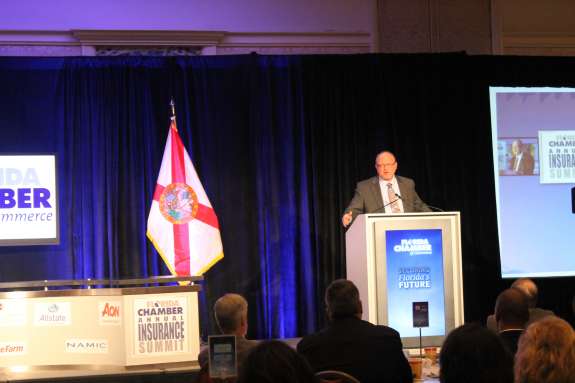 Florida CFO Jeff Atwater spoke January 27 at the Florida Chamber’s Insurance Summit in Orlando about the selling of government-backed policies to private companies.

Seventy percent of policies are now held by companies that mainly do business in Florida.

“It may not be the familiar names to every household,” Atwater said. Let us take on the ownership of providing a greater degree of comfort to the public that in fact these companies are sound.”

Most Florida homeowners aren’t insured by big companies. Here’s why:

After the 2004 hurricanes caused $54 billion in damages, Citizens Property Insurance- which is publicly owned-  went from the insurer of last resort to the insurer of only resort for many Floridians.

A decade later and private insurance is back on the rise, but it’s mostly Florida-based insurance companies. No big names.

“Regrettably, some news stories want to focus on our domestics as thinly capitalized, one storm away from insolvency,” McCarty said. “Not only is this misplaced, it’s just plain wrong.”

The state has approved selling more than 400,000 Citizens policies to private companies in 2015.

McCarty didn’t address reporters about the possibility of Florida’s governor and cabinet replacing him next week.