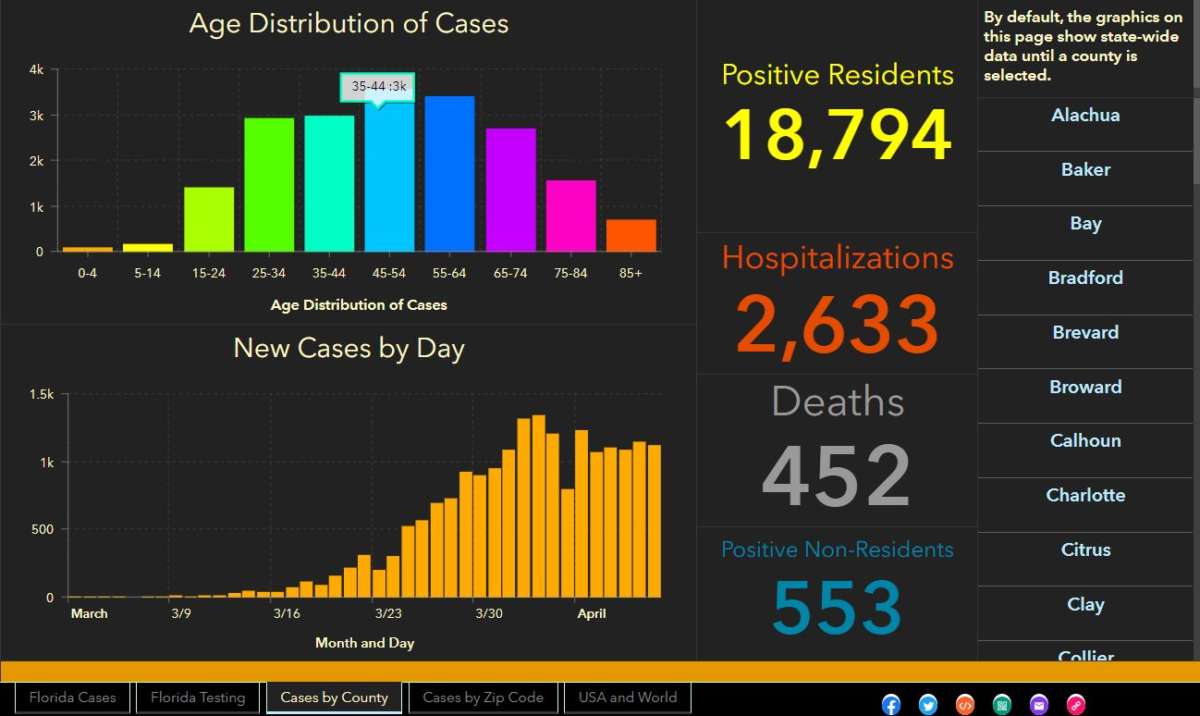 452 Floridians have died from COVID-19, according to the latest figures from the Florida Department of Health.

Nationwide, there are 530,830 confirmed cases and 20,646 deaths. The country’s number of deaths topped Italy’s on Saturday, make the U.S. outbreak the deadliest in the world. Across the globe, there are 1.8 million cases and 110,892 deaths.

The U.S. Department of Agriculture will allow Floridians to buy groceries online with food stamps through the Supplemental Nutrition Assistance Program, or SNAP.

The change is expected to take place later this month, and includes retailers like Amazon and Walmart. Florida has 3 million people on the SNAP program receiving more than $4 billion dollars annually.

In a statement released Saturday, Florida Agriculture Commissioner Nikki Fried said the change will reduce the shopping risk from COVID-19.

Good news: online grocery shopping with SNAP benefits is coming to Florida, thanks to @SecretarySonny and @USDA approving the state’s request.

This program will be administered by @MyFLFamilies and will help Floridians more safely access food in #COVID19.https://t.co/l40R7F7fhx

Suspect coughs at deputies, says ‘I hope you catch corona’

DELAND, Fla. — A suspect in Florida facing charges of battering his mother coughed and blew at deputies while he was being arrested, telling them he hoped they caught the new coronavirus.

The Volusia County Sheriff’s Office says deputies were called to a home Brent Smith shares with his mother on Saturday night after she said he shoved her several times, grabbed a butter knife and threatened to kill her. The sheriff’s office says that as deputies took Smith into custody, he threatened them and coughed at them from the back of a patrol car, saying that he hopes they catch the coronavirus.

He was being held in jail without bond.

DAVIE, Fla. (AP) — A Florida town has placed its police chief on leave after officers alleged he said a deputy died of the coronavirus because he was a “homosexual who attended homosexual” events.

The Fraternal Order of Police said Davie Chief Dale Engle made the comments after officers expressed concerns about their safety following the death of Broward County Sheriff’s Deputy Shannon Bennett.

The union said Engle responded by saying Bennett got the disease because he attended gay sexual events. Engle later said in an email to his staff that his statements were not meant to be derogatory.

The Herald reported Sunday that the backdoor pressure worked as the Holland & Knight law firm told its senior partner representing the newspaper to abandon the lawsuit.

The Herald is now pursuing the lawsuit using another law firm. Holland & Knight regularly does work for the state. Helen Ferre, a spokeswoman for the governor, says there was no effort to strong-arm the newspaper.