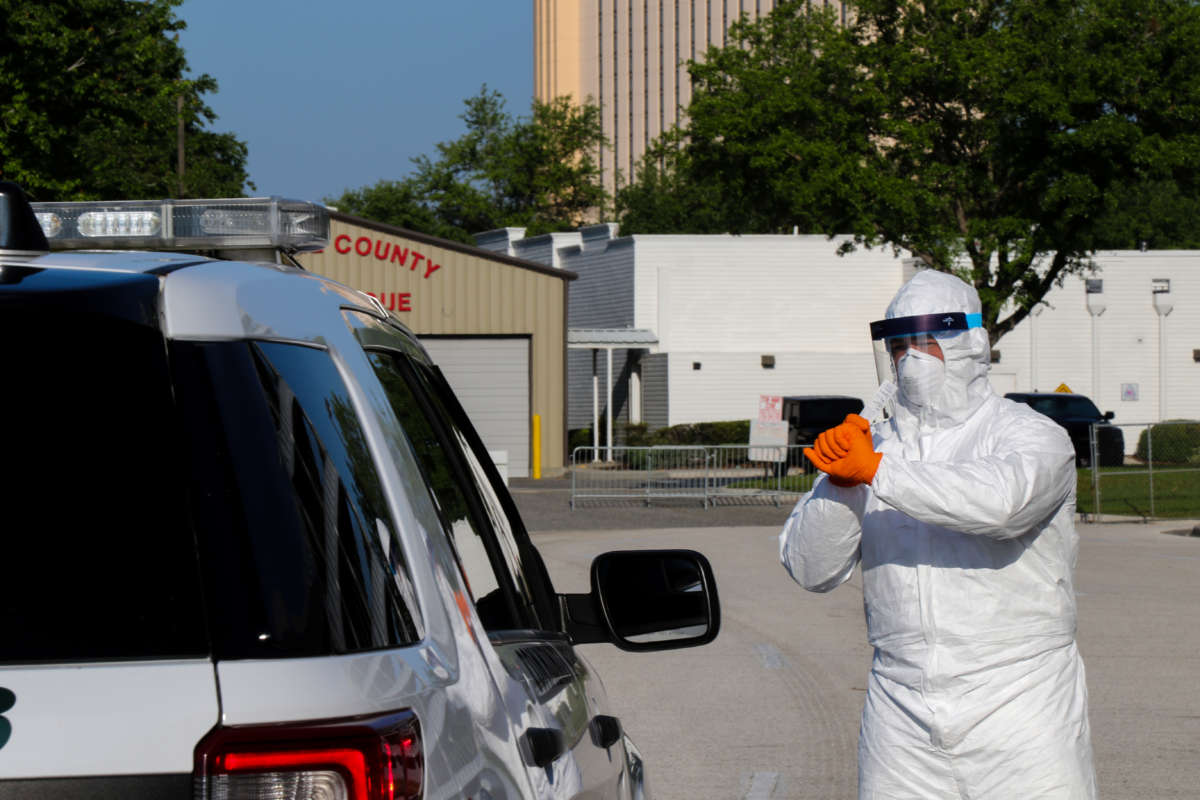 Florida has had 21,019 positive coronavirus cases, with 2,841 hospitalizations according to the latest numbers from the department of health.

Orange County mayor Jerry Demings says the county will start to plan for how to re-open businesses once the peak of the pandemic passes.

In a press conference, Demings said while 49 of the 53 zip codes in Orange County had cases as of Monday morning, “to see the flattening of the curve is a positive direction.”

“We are seeing the flattening of the curve happen now, which does suggest that we should look, at some point, to relax  some of the restrictions that have been put in place. That has to be orderly process, that is not something that is going to happen overnight.”

Demings said he wants to assemble a leadership group by the end of the week “to plan what that looks like when we do decide to reopen.”

He said the county wants to ramp up testing, with five new mobile sites planned around the city of Orlando.

‘Deceleration’ in cases in Orange County

Orange County health department director, Dr. Raul Pino said with 1017 cases, the rate of new infections appears to be slowing in the county.

“We need more data to be able to to assess if we have peaked already,” said Dr. Pino.

“In some places they peak twice, and in some cases it is related to the fact that people kind of relax a little bit and then, don’t use their protection measures that have been put in place.”

He said his team is assembling test kits for the new mobile testing sites, with the aim of completing about 300 tests per day at each site.

Orange County will not mandate mask wearing in public spaces, unlike neighboring Osceola County. Sheriff John Mina said he didn’t think was the place for law enforcement agencies to be enforcing mask use.

“I was at the grocery store this weekend.Probably 99% of the people had masks on. I think people get it,” said Mina.

“Certainly we didn’t want to be put in the position of trying to enforce that, especially in some of our more challenging areas where we already have issues related to crime. I think that, again, we just continue to lessen the trust that some areas may already have in law enforcement.”

“We’re happy to say the first one who tested positive, he is now back to work, and all the other deputies, four other deputies are all resting at home and definitely on the road to recovery.”

A twelfth TSA officer at Orlando International Airport has tested positive for coronavirus. In an email sent to officers today, Federal Security Director Pete Garcia said the screener did not contract the virus at the airport.

The officer’s last shift at the airport was on March 13th.

They will not return to work until they are cleared by a doctor.

The Greater Aviation Authority continues to deep clean checkpoints along with break rooms and work areas.

Employees are encouraged to wear N-95 and surgical masks provided by the TSA and to stay home if they’re sick.

In Central Florida, Orange county leads the region in confirmed coronavirus cases at 1,017 and 13 deaths.

Sumter County, home to the sprawling retirement community of The Villages, has had 111 cases, 27 hospitalizations and nine deaths.

Matthew Peddie contributed to this report.

Central Floridians who want to help provide meals to local families during the pandemic and maintain social distancing can do so through virtual food drives.

Virtual food drives have already raised more than $98,000 dollars for Second Harvest Food Bank of Central Florida. The pandemic has put pressure on food banks, with tens of thousands of Floridians out of work.

One local teen is inspiring and engaging his peers to fight hunger and feed hope. Way to go, James! 🍏 You can start a virtual food drive too (head shaving not required) at https://t.co/sVsdXV9UFX.https://t.co/U2qRUeDuHx via @WESH @ChrisGuardaro

“So, you’ll see apples, you’ll see peanut butter, you’ll see bread and carrots, an assortment of potential items that people will receive that we will then purchase with the money that is donated through the virtual food drive.”

Spence says getting started is as easy as answering a few questions on their website and setting up a username and password.

She says they’re not accepting food donations to avoid the risk of contamination as coronavirus cases continue to rise in the area.

UCF Interim Director of the Faculty Center for Teaching and Learning Ann Miller says faculty and staff in four departments decided to start their drive over email.

“I mean all of us have maybe someone we know personally who’s out of a job or maybe whose even ill or affected somehow with COVID-19. But if we’re having a hard time figuring out how to get involved this is a tool for people who just really want to help and don’t know how.”

Miller says they already had to double their goal to over $2,000 dollars, as they raised the first $1,000 dollars in less than four hours.

461 Floridians have died from COVID-19, according to the figures last night from the Florida Department of Health.

Nationwide, there are 555,313 confirmed cases and 22,020 deaths. The country’s number of deaths topped Italy’s on Saturday, make the U.S. outbreak the deadliest in the world. Across the globe, there are 1.8 million cases and 114,09 deaths.

The drive through testing site at the Orange County Convention Center will be able to test more people beginning today.

The criteria for testing has expanded too: anyone experiencing coronavirus symptoms or with underlying conditions can get a test regardless of age, along with anyone who has been in close contact with someone who tested positive for coronavirus whether or not you have symptoms.

First responders and health care workers, including staff at long term care facilities can also be tested at the site.

Governor Ron DeSantis announced last week that the state of Florida would take over the Orange County site along with two other drive through sites in Miami and Jacksonville.

The Volusia County Council will begin meeting once a week starting Tuesday to discuss the county’s response to the coronavirus crisis.

Governor DeSantis’ emergency declaration limits the amount of people that can gather in county chambers, so Volusia County, like many local governments, is going virtual with its meetings.

Residents can submit public comments online, which will be added to the record and read at the meeting.

For residents who can’t participate online, viewing kiosks at the Volusia County Administration Center in DeLand. following social distance guidelines set out by the CDC.

Mental health struggles and anxiety over housing are adding to the stress of quarantine for some members of the LGBTQ+ community.

Curtis, a transgender sophomore at UCF, told WMFE he was worried about going back home to stay with his family.

He said they don’t know he’s transgender.  He has been able to stay in university housing, but wonders how long it will last.

“If it gets to the point where I have to go back home, it’s really gonna suck but it’s a situation I’ll have to deal with,” said Curtis.

UCF’s Lavender Council, a student advisory board for LGBTQ+ services, is providing resources on social media and making members available to talk to students in the community.

He said reaching out for help can be difficult.

“Some of the students who might be in dangerous situations will have access to social media or if they do, it’ll be monitored by homophobic parents.”

Adams said that keeping in contact with friends and allies can be one of the best ways of coping with self-quarantine during the pandemic.

Report: Before Florida Shut Down, Tourists Got Sick Here And Then Spread Coronavirus At Home

Governor Ron DeSantis has blamed travelers for bringing the coronavirus to Florida.

But a report over the weekend from the New York Times found the opposite was also true: In early March, before the state put a stop to large gatherings, people were getting sick here and then carrying the virus with them throughout the country.

“Florida has so many visitors from all over the world — including Europe and New York, which were places where people were getting sick — that the reaction from the governor and other public officials was to call for limiting those visits and restricting or at least tracking the people who were coming here and asking them to quarantine,” said New York Times Miami bureau chief Patricia Mazzei.

“But even before then, we were seeing people flying back and forth. And the virus doesn’t know any borders. So, of course, there were people who were going to be getting sick in crowds here and then going back home.”

At least 38 people got sick at the Winter Party Festival on Miami Beach in early March — and two of them died. People also told the Times they got symptoms of the coronavirus after spending time at Disney World.

“The virus is ahead of the public policy makers. Every time local officials, for example, were making decisions about whether to cancel events or keep people home, they were using data that was incomplete, if they had data at all. They were sort of making their decisions blindly.”

Mazzei said her reporting offers a lesson for the future: More testing is needed to understand how widespread the virus is so officials can make informed decisions about how to stop it.

Amid pandemic, Christians celebrate an Easter like no other

NEW YORK (AP) — Christians around the world celebrated Easter isolated in their homes by the coronavirus. In many cases, pastors preached to empty pews.

St. Peter’s Square was missing the crowds that usually gather to hear Pope Francis, who celebrated Mass in the largely vacant basilica, Some U.S. churches proceeded with in-person services despite state or local bans on large gatherings.

In Florida, Nevada and Arizona, churches held drive-in services. And in Britain there was hopeful news: Prime Minister Boris Johnson was released from the hospital after a week of treatment for the virus. He paid an emotional tribute to National Health Service workers for saving his life.