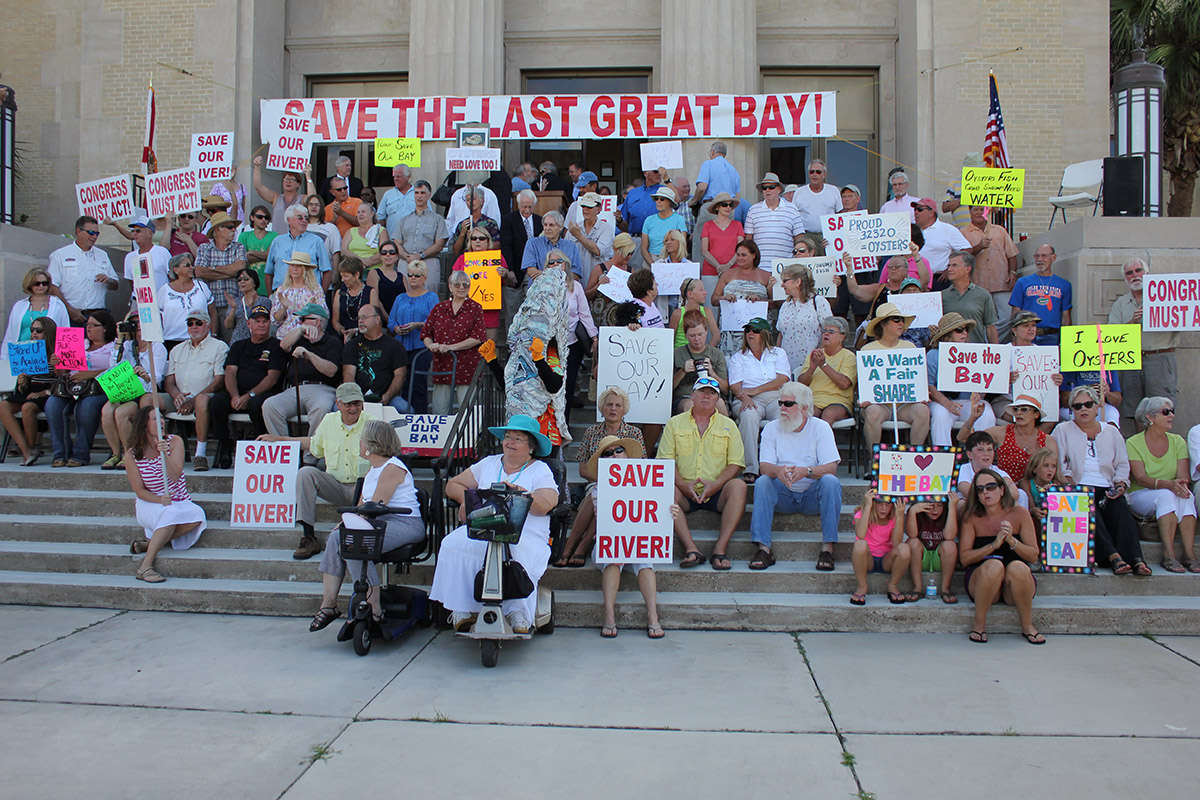 The Jim Woodruff Dam is in Chattahoochee Florida. It’s here, where the Flint and Chattahoochee Rivers join to form the Apalachicola, home to a Bay that used to be famed for its seafood harvests, most notably its oysters.

When rain is plentiful in south Georgia, water flows freely into Florida. But when there’s drought, as there was for ten consecutive months in 2012, water stays behind the dam. And this is a source of conflict between the states.

“We’re not asking for a great amount of water more. We’re just asking for an equal share of water.” This is oysterman Shannon Hartsfield in 2012, during the drought. The Apalachicola Bay oyster fishery had just crashed. It still hasn’t recovered. In a more recent interview, Hartsfield said he hasn’t harvested oysters in nearly a decade.

“I actually quit oystering in probably the middle of 2012. I started working on trying to rebuild the bay. I worked, and ran quite a few programs of using oystermen rebuilding the bay.”

Those efforts haven’t work as hoped. Florida recently put a 5-year ban on oyster harvesting in the Bay. Researchers and oystermen are still figuring out how to make oysters viable again. One thing they know they need: adequate freshwater input.

That’s what Florida is after as the Supreme Court hears its case against Georgia. Florida sued Georgia in 2013, claiming Georgia’s water consumption caused the fishery crash. Florida wants to cap water usage by farms along the Flint. It claims those farms are taking more than their fair share of water.

“The Flint River is an area where there’s a lot of agriculture.” Georgia Ackerman is the Apalachicola Riverkeeper. “Atlanta is also dependent on Lake Lanier for drinking water in that system. So ultimately Florida is seeking a consumptive use cap on Georgia’s water usage.”

This is the second time the issue has been before the nation’s high court.

A special master appointed by the court in 2014 ruled Florida had been harmed as a result of Georgia’s water use, but ultimately said the state had no standing because part of the blame is with the U.S. Army Corps of Engineers. The Corps manages the dam, but wasn’t included in the lawsuit.

The second special master’s report was also empathetic to Florida’s plight, but said the state didn’t prove that capping Georgia’s water use would lead to an increase in flow to the Bay.

“We have seen a decline in freshwater flow over the decades, and we’ve seen a change in the flow regime that the Corps regulates the water coming downstream. More and more water has been held upstream, for upstream consumption. And it has negatively impacted, it has hurt the Apalachicola floodplain and bay.”

To Ackerman, a better way to resolve the issue would be for the dam’s managers to adjust water flow, according to historical flood cycles.

“Flow that mimics Mother Nature’s patterns are especially important. So you want to see higher water, particularly in spring and summer, especially heading into spring, and spawning season, when species are reproducing.”

Even if Florida were to win its lawsuit, the ruling would have no impact on the U.S. Army Corps of Engineers. Its water control manual says if there’s a drought in Georgia, that state would get water priority.

“The updated Water Control Manual creates even worse circumstances for the Apalachicola River in that the number of drought operation days is increased, and the water can be dialed back.” Ackerman says. “And so if we go into drought operations like we did in 2011 and 2012, it’s possible that we can see even worse results.”

While hoping for the best, Ackerman and others are trying another route. The Apalachicola Riverkeeper is part of a coalition suing to change the Manual with an eye toward getting more water through the dam and into the Bay. If neither case pans out, river flows will continue be managed as they have been for decades. The question is, would that end hope for the resurgence of the Apalachicola oyster?

“Yes, I’m looking forward to having a future. For the first time in a long time, I see a future in the back of the bay.” Shannon Hartsfield, the fisherman, is still optimistic.

The Florida Fish and Wildlife Conservation Commission’s decision to close the bay to oyster harvesting is giving oyster reefs time to regenerate. Researchers from FWC and Florida State University are at work trying out different restoration methods and management scenarios. And there’s been some pretty good rainfall in the past two years.

“My dad is about to turn seventy-three years old. And I’d love to be able to take him back out with me, and harvest oysters with him again. So this is the first time in a long time that I see a future back in the bay.”