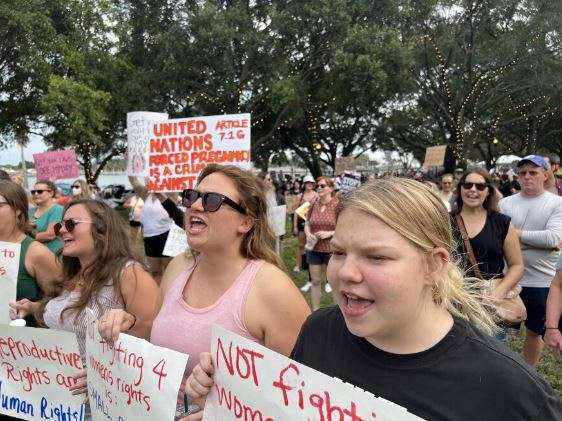 While Gen Z protesters can be quick to put themselves in harm’s way, organizers say they are trying to buck the myth that young activists are invincible.

Some Florida activists are alarmed at what they say is an increase in counter-protesting and police presence at their events.

And young people are especially at risk. Gen Z activists harness social media and physically organize on political issues, but were less likely to vote in the 2020 election. While Gen Z protesters can be quick to put themselves in harm’s way, organizers say they are trying to buck the myth that young activists are invincible.

Zander Moricz, the director for the Social Equity and Education Initiative, which fights against anti-LGBTQ education laws in Florida, said Gen Z activists need to be able to rely on local support systems.

“It can also be dangerous because missteps happen. And organizing is inherently volatile,” Moricz said. “Young activists need to not charge into every protest as though that will be the only protest of the year.”

Trevor Wild, an organizer for March For Our Lives, said young protesters in Florida should be especially cautious.

He pointed to the Combating Public Disorder Act, a bill signed into law in April that increased legal punishments for “violent or disorderly assemblies,” which Wild said chips away at Floridians’ First Amendment rights.

“It’s because of those laws passed by those who want to stifle our ability to stand up against injustices, to stand up for our lives, that we do face more of a risk from police from counter protesters that are increasingly becoming more violent, and for legal action against those who are just trying to stand up for something that they believe in,” Wild said.

Wild said Gen Z has a history of activism that started in response to gun violence in schools, such as those at Columbine and Parkland.

“We know what the trauma of being in a lockdown drill entails. We know the experience of making sure we know where the exits are in schools, because there’s always that threat of an active shooter,” Wild said. “And that’s something that separates us from other generations.”

Moricz said many Gen Z activists ignore the advice given by older generations.

“A fundamental reason that there’s mistrust between Gen Z and older generations is you caused the problems. We’re not going to listen to what you think we should do to fix them because you didn’t fix them. What we’re going to do is try this our way,” Moricz said. “And I think that that mentality is great. It’s important and it’s correct. But it also leads us to reject help, and it leads us to reject guidance. And that’s also not productive.”

His solution is a youth-led movement that draws on older, more experienced organizers for help.

“It’s been dangerous. And it’s been really scary and sad,” Moricz said. “And it’s because our governor and our legislators are creating this overarching culture of hate across Florida. With their policies and with their actions, in bold turning hateful people to stand by their ideologies, and to be able to point to a statute now and say, ‘No, I’m valid, what I’m doing is correct.’ ”

On July 4th, a 13-year-old protesting the Supreme Court’s overruling of Roe v. Wade was arrested by Lakeland police for using a megaphone.

The child, Lillie Johnson, was released the same day, according to a TikTok posted by their mother, Lauren Johnson.

In another TikTok posted by Johnson, Lillie Johnson is seen being taken to a police vehicle by two officers.

Johnson was charged with a misdemeanor for violating the city’s noise ordinance.

“Oh my god, wow. That’s nitpicking,” said Bob Smedley, a board member for the Zebra Coalition, an Orlando nonprofit that provides shelter and counseling for LGBTQ+ youth.

“But, you know, you may have a community that may or may not have certain values that they expect their police force to enforce.”

Smedley said protesters need to know what will get them arrested in their city.

“It’s fine to be able to go and protest,” Smedley said. “If you’re not paying any attention to any community laws, or regulations, or whatever, they’re going to be subject to arrest. That’s just part of it. Back when people were protesting the Vietnam War, they all expected to be arrested, to some degree. So I mean, that’s a risk that you’re going to take when you’re doing any kind of protesting.”

“Local policies about organizing and the ways that you can enter dangerous situations or the ways that you can operate illegally are not made available, and they’re not made easily understandable so that people are forced to trust police officers and people are forced to trust the government telling them what they can and cannot do,” Moricz said. “I think that leads organizers into really dangerous situations when you’re literally opposing those systems.”

He added that young activists often put themselves at risk in these uncertain situations.

“I think that there is this almost martyr mentality for a lot of new activists have coming into the space to be a sacrifice,” Moricz said. “And that’s, that’s not what we’re here to do. We’re here to be self advocates, we’re here to create safety for ourselves, not at the expense of ourselves.”