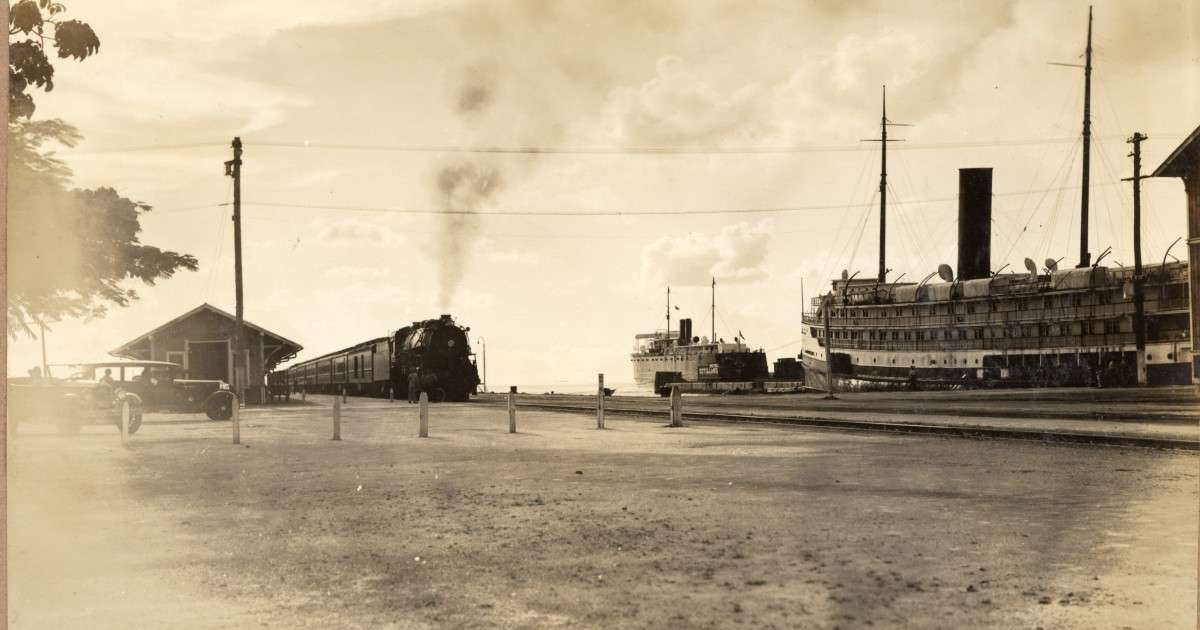 The clock recently returned to Key West came from the terminal to the left of the train in this photo from the 1930s. Photo credit: Heritage House Collection / Monroe County Public Library

The Key West Art and Historical Society has a permanent exhibit about the Overseas Railway, which linked the Keys to the mainland from 1912 to 1935.

So curator Cori Convertito was excited when she got an inquiry from a man in Ormond Beach who said he had the clock that was originally from the railway’s terminal in Key West. She checked with the museum’s registrar.

The registrar told her he thought they already had the station’s clock.

“So lo and behold he pulls up the record and he said ‘Well, I’ve been unable to locate the clock. It’s missing and has been for years,'” Convertito said.

The Navy, which now has the property where the railroad terminal once stood, gave the Art & Historical Society the clock in 1957. Convertito said it appears the museum loaned the clock for repairs to the would-be donor’s father back in the early 1960s. But the repairs never happened and the museum lost track — until the man contacted them.

“He had no idea that it actually had belonged to us and we had no idea where it had gotten off to,” she said.

Last month, the clock was driven back down the East Coast to Key West from Ormond Beach. It will become part of the museum’s display on the railroad, along with artifacts like dishes and Ernest Hemingway’s train ticket.

And they won’t have to fix the clock — the donor did that.

“It’s just nice to have it back here and it’ll be great to have it on display and working,” Convertito said. “You just never know where these things are. We’re just happy that it’s home.”

Want to keep up with the latest stories out of the Florida Keys like this one? Sign up for The Tieline, our newsletter focused on all things Keys and Monroe County. The newsletter will arrive in your inbox every two weeks and is written and curated by WLRN’s southernmost reporter Nancy Klingener. She shares her reporting, the latest news out of the Keys and much more. Head here to sign up.