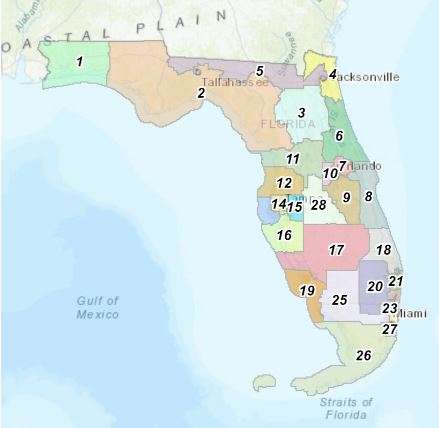 The Florida Senate's proposed congressional district maps would give Democrats an extra favorable seat, while maintaining the GOP's advantage. (Floridaredistricting.Gov/SCREENSHOT)

A Florida Senate subcommittee has recommended two nearly identical U.S. House district maps for further consideration as the legislature’s remapping efforts officially get underway this week. They would both give Republicans a 16-to-12 seat advantage while adding a congressional district.

An independent data analysis of the proposed maps shows Republicans would have a 16-to-12 seat advantage over Democrats. Right now, the G-O-P holds 16 congressional seats and Democrats occupy 11.

Once the Senate finalizes its plan for the state’s congressional districts, it will have to hammer out its differences with the House plan.

Long-time Florida redistricting data analyst Matthew Isbell says the House map would give Republicans at least a 17-to-18 seat advantage.

“Right now, the Senate has a plan that is very fair partisan-wise for Congress. Now the House has a plan that’s pretty gerrymandered. So the question becomes: Which of those two sides win[s] out?”

Isbell says unlike the Senate’s plan, the House plan would’t give Democrats an extra seat in the Tampa area. And one the state House’s maps would enlarge Rep. Stephanie Murphy’s Orlando-area district, turning it from solid Blue to Red.