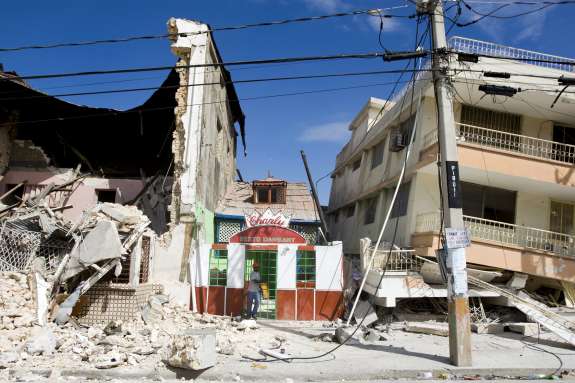 When the first tremors hit, Lovena Salomon was at her aunt’s house in Saint Marc, an hour northwest of Port-au-Prince.

“I’m just laying on the bed, and all of a sudden, the bed just started shaking. I was like, ‘Sak passe?’ she remembers.

Her aunt replied, Jezi ka passe–creole for “Jesus is coming.”

“Jesus is coming? What does that mean?” Salomon remembers asking. “She said, “It means earthquake. There is an earthquake!”

Salomon had arrived in Haiti from Florida just two days earlier to see family. She was hoping to introduce her fiancé to her grandmother.

She thought, “Lord, why did I come to Haiti around this time? Why am I here? And I thought about it? And it was like why are you not?”

She made her way to the U.S. embassy to ask for help, but ended up translating and nursing the injured.

After two weeks, the U.S. sent for its citizens and Salomon left, carrying her passport, a purse, and guilt.

“The hardest thing was getting into the plane and coming back home. I had clean clothes to put on and I knew what I was going to eat the next day, and they had no hope,” she admits.

Over 1 million Haitians were living in tents in the weeks after the earthquake. That number has dropped to 100,000.

Salomon goes back twice a year to bring food and hygiene products. The 27-year-old is a now an MBA student at University of Central Florida. She’s a member of the Greater Haitian American Chamber of Commerce and is starting a non-profit to fill the gap in services in Haiti .

Dr. Louise Comfort, director of the Center for Disaster Management at the University of Pittsburgh, blames that gap on a political vacuum where uncertainty reigned before and after the earthquake.

“This is a situation where the existing government in Haiti was very fragile. Resources came pouring in. It wasn’t a question of money. It was really a question of how do we get the work done,” Comfort says.

She is partnering with the Haitian state university to train students to use technology to assess building standards.

“International help can guide, can support, can suggest. But honestly, the Haitians have to do it themselves,” she believes.

The Haitian Consul General in Orlando, Laurent Prosper, says, “That’s the reason I believe our diaspora is very important to us.” He has coordinated post-earthquake missions with doctors, nurses, and engineers in Central Florida—many Haitian.

“We are in a better situation than we were five years ago. We have a pretty strong educated diaspora, and we’re hoping that with them, we can make Haiti get to the other level,” he believes.

Tourism in Haiti is up and new companies have emerged, but Prosper says education and job creation are key to rebuilding. Over 1 million children now attend school for free. Prosper wants to make sure they stay in Haiti.

“We definitely have been exporting our academic resource. Haitians go to a lot of countries in Africa and Canada and the U.S. and not coming back,” he regrets.

But that’s not Loverne Salomon. Back in Orlando, she shares her earthquake survival story whenever she can.

Salomon is preparing to get 501 c 3 status for her non-profit. She says if people like her don’t go back and help, then Haiti will remain the way it is.

“It’s not the government that’s going to change Haiti. It’s people like us.”