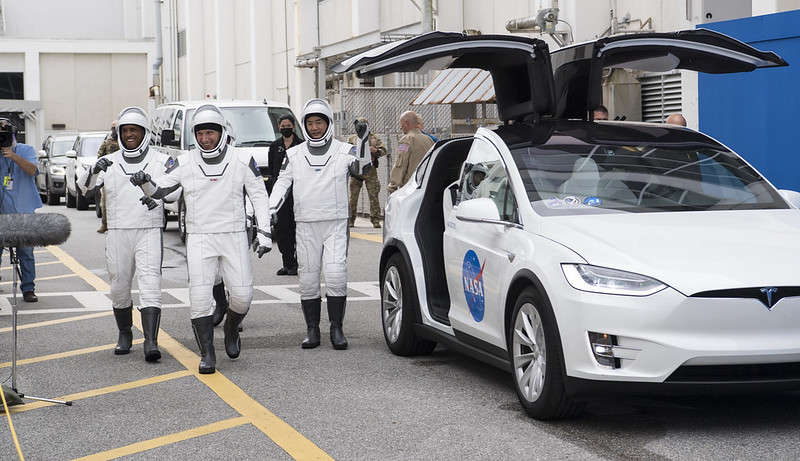 This weekend, SpaceX will launch four astronauts to the International Space Station from Kennedy Space Center. The mission comes just a few months after a test launch returned human spaceflight to the U.S. for the first time in nearly a decade.

90.7’s space reporter Brendan Byrne spoke with Nicole Darden Creston to explain the next launch and its significance in human spaceflight.

NICOLE DARDEN CRESTON: Who’s on board and what’s the objective of this mission?

BRENDAN BYRNE: There are three NASA astronauts and one Japanese astronaut. From the U.S. there’s NASA’s Mike Hopkins, Victor Glover and Shannon Walker. And also on board is the Japanese Space Agency astronaut Soichi Noguchi. The four are on what’s called a crew rotation to the International Space Station. They’ll spend about six months at the ISS, conducting science experiments and maintaining the station before heading back home, splashing down off the Florida coast.

NDC: We saw two NASA astronauts launch on a Crew Dragon capsule earlier this year. What’s different about this mission.

BB: DM-2, which launched at the end of May, was a test mission — one of the final tests needed to certify SpaceX’s Crew Dragon to fly NASA astronauts. This mission, named Crew-1, is the first operational mission of the spacecraft. Earlier this week, NASA gave the Dragon its human spaceflight certification.

That was a big deal for NASA. You’ll recall when Shuttle ended, NASA relied on the Russian space agency for rides to the station. The cost per seat on that vehicle was increasing, something like $50-60 million and upwards of some $90 million at times. And while NASA’s partnership with SpaceX and Boeing cost about $6 billion to get to this point, the agency said working with commercial partners like this will save NASA in the long run — money it can invest in other programs, like returning humans to the moon or sending more complex space probes into our solar system.

NDC: This Crew-1 launch was delayed a bit from Halloween. What’s NASA and SpaceX keeping an eye on ahead of this weekend’s attempt.

BB: One thing that NASA wanted to get to the bottom of was an abort of a SpaceX Falcon 9 launch last month. This was a commercial launch and right as the engines started, the computers shut it down. SpaceX did some investigating and found an issue from manufacturing and replaced the affected valves on the Crew-1 rocket. Moving forward, this is something that NASA will continue to keep an eye on. SpaceX launches a lot of rockets as we both know and NASA said it is closely watching those launches to make sure the system is safe for its astronauts. NASA set a very high bar for mission success, requiring SpaceX prove that the probability of a mission failure is one in 270 launches.

NDC: So a lot of work getting to this point. What can we expect on launch day?

BB: NASA and SpaceX are targeting a launch Saturday. This is what’s called an instantaneous launch window, so the only time it can launch is at 7:49 p.m. EST. Right now weather is looking pretty good and if the crew does launch Saturday it will only take about 7 hours to get to the ISS. The crew has a backup window on Sunday at 7:27 p.m. EST but because of orbital mechanics if they do wait for that launch attempt, it will take a little over a day to get to the station.

BB: Actually, it’s quite roomy. This will be the most crew members in the capsule, but it has many of the comforts of home. Comfy seats, sleeping bags, even a bathroom. And I should mention, when this crew arrives at the station there will be 7 total crew on the station, which only has 6 bedrooms. We were told this week that Mike Hopkins will live in the Crew Dragon capsule while it’s docked on the station until NASA can figure out a new place for him to sleep.

NDC: 90.7’s space reporter Brendan Byrne is covering the launch of four astronauts from Kennedy Space Center this weekend. You can stay up to date with this mission by following WMFE on Facebook — we’ll have a live stream of the launch attempt.