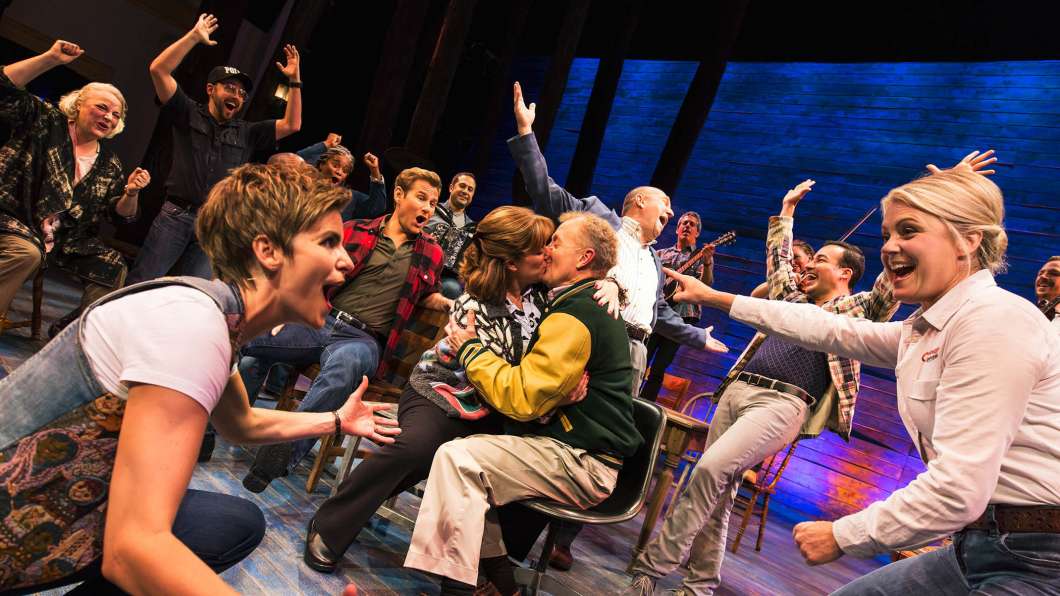 The Original Broadway Cast Recording for Come From Away comes out March 10.
Image credit: Matthew Murphy

An awful lot of musicals include an early song of welcome/introduction – “Iowa Stubborn” in The Music Man, “It Sucks To Be Me” in Avenue Q, even “Jet Song” in West Side Story. So when the inhabitants of Gander, Newfoundland, introduce themselves in “Welcome To The Rock” at the beginning of Come From Away, there’s something familiar about the this-is-who-we-are exposition. But these are not just any locals: they’re the locals of the small town of 10,000 where 38 planes and almost 7,000 people were stranded by airspace closures on September 11, 2001. The show, from the Canadian married writing team of Irene Sankoff and David Hein, chronicles the few days when this little town took in thousands of strangers.

You might expect an entirely mournful or entirely saccharine collection of music in a September 11 story – a choice between wallowing in misery and wallowing in unbearable earnestness. But that double-bind is avoided on Come From Away‘s original Broadway cast recording in part by an infusion of humor. In “Blankets and Bedding,” for instance, two classic folk styles combine. A tense Celtic flute under the local women’s concern about how to help gives way to kicky bluegrass yarn-spinning, and then one man’s shopping list expands, with comedy rhythms almost like a summer camp song, like “Hole In The Bucket” or “99 Bottles Of Beer.” Much of the cast album, in fact, feels like a coming together of modern musical-theater ballads and drinking songs, often in the same number.

The show never loses sight of the way these people are suspended in a certain unreality, and that shows up in the music. Like many musicals, this one devotes a good stretch to a raucous celebration (“In The Bar/Heave Away,” “Screech In”), but here, it’s a distraction that cannot last. These people are still here because they cannot go home, because it is not yet believed to be safe. And in just the next song, “Me And The Sky,” pilot Beverley (the real Beverley Bass was American Airlines’ first woman pilot), played by Jen Colella, tells her story. And in it, there are elements of the same longing for fulfillment – matched musically by a soaring chorus – that shows up in songs like “Corner Of The Sky” from Pippin – that’s common in musical theater. But there is also a jarring reminder that in this show, the externalities of violence and fear have made the ground shift, and the shape of many wishes has literally changed overnight.

While the rock influences (or at least the Broadway-rock influences) of Come From Away make it feel firmly like a modern piece, there is an echo in the story of classic American musical theater – specifically, Brigadoon. That Lerner & Loewe classic, which opened in 1947, follows two Americans who find a mysterious Scottish village that appears for one day every 100 years and then disappears again. Not only are there Celtic influences in the music of both shows, but both find their most poignant notes in the sometimes transient nature of connection. But where Brigadoon is a village that vanishes, here, it’s the visitors who vanish after a short time. And as committed as Come From Away is to the story of the Gander residents’ generosity, it devotes one of its last songs (“Something’s Missing”) to the fact that when this period of connection was over, there was a difficult return to normalcy both for the town and for the people who finally had to face what awaited at their destinations.

The show circles back to themes of unity in the finale with a reprise of “Welcome To The Rock,” expanding the community defined in the opening to include the visitors – and perhaps the world. But it remains a show unapologetically admiring of a specific community that opened its buildings – even its bar – to strangers. And it did so in defiance of the fear of unfamiliar visitors that those same series of days instilled, or simply excused, in many others.

The original Broadway cast recording of Come From Away will be released March 10.