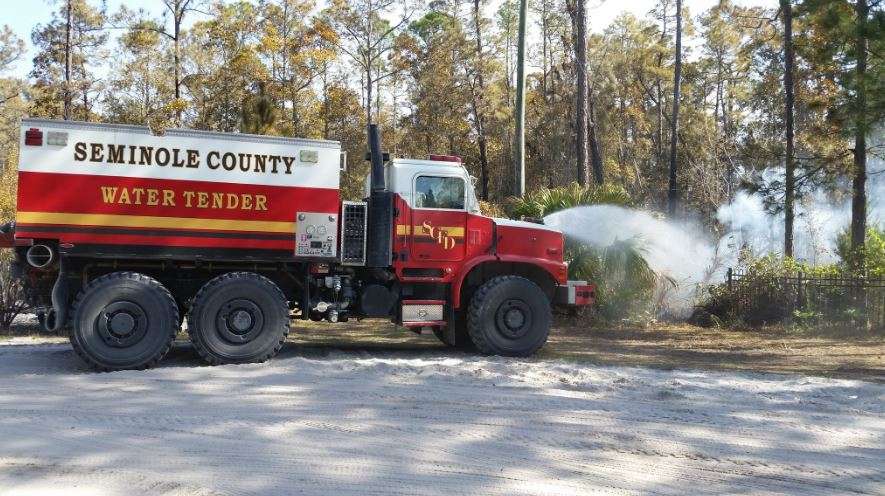 Firefighters are mopping up a wildfire that started near Oviedo Monday afternoon. Seminole County Fire Department’s Lt. Paula Thompson said crews were battling the Seminole Woods Fire throughout the evening. Thompson said the fire is out now,  but crews are making sure it doesn’t flare up again.

“There was a swamp area, the Black Hammock, and it got into that area, there’s just a lot of fuel and brush, it’s very dry in that area.”

Thompson said a shelter was set up for homeowners who decided to voluntarily evacuate their houses.

she said residents need to be aware of the risk of wildfires.

“Clear the brush around your homes,” said Thompson.

“If you have wooded driveways, try to clear that and make sure we have good access in case there is a fire in your area, that we can enter your driveway with one of our engines or one of our emergency vehicles. And also just be cautious if you use anything that could create a spark.”

The Florida Department of Agriculture and Consumer Services said wildfires have burned through 46,000 acres in the first three months of the year.

That’s two and a half times more than the acreage burned the same time last year.

Smoke from a wildfire forced the Florida Highway Patrol to shut down part of the 528 for several hours Tuesday morning.

Sean Gallagher, Orlando District Manager for the Florida Forest Service, says conditions are ‘considerably drier’ than they were this time last year.

“We’re seeing fires do things at this time of year that we don’t normally see them do until April and May,” said Gallagher.

He said some fires have been harder to control than they should be at this time of year.

“Generally we get more rain throughout the winter, so fires that we have in February and March, they usually behave themselves a little bit more if you will, than the fires we’re seeing now.”