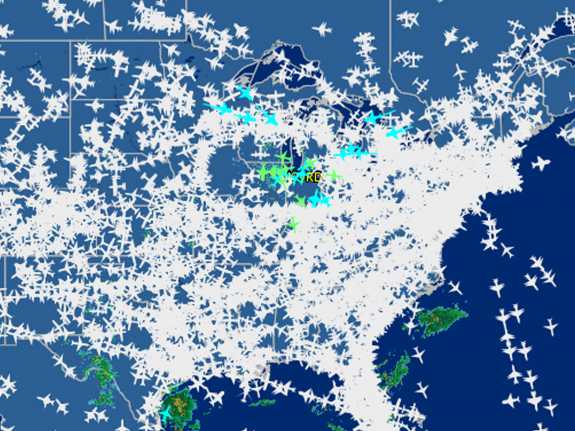 A screen shot provided by FlightAware shows airline traffic at 10:20 a.m. EDT Friday over the United States. A fire at a Chicago-area air traffic control facility has grounded hundreds of flights.

Flights in and out of Chicago’s two airports came to a halt Friday morning after a fire at an air traffic control facility.

As of early Friday afternoon at least some of the flights had begun taking off and landing, reports NPR’s David Schaper in Chicago.

The Associated Press says: “The fire started in the basement of the Chicago Air Route Traffic Control Center in Aurora, about 40 miles west of downtown Chicago, city of Aurora spokesman Dan Ferrelli said in an emailed statement.”

The Chicago Tribune quotes police as saying the fire was deliberately set but “is no terrorist act.”

The Trib quotes Aurora police Chief Greg Thomas as saying that the incident appears to be “a local issue with a contract employee and nothing else.”

“The employee was found in the basement of the radar facility suffering from self-inflicted wounds, police said. He was taken to a hospital and the radar center was shut down and evacuated.”

Flightaware.com CEO Daniel Baker says “major airlines, regional flights, foreign air carriers, cargo companies and all flights in and out of these airports” have been affected.

At 6 a.m., the Chicago Department of Aviation issued a statement saying it had been notified that the Federal Aviation Administration tower in Aurora had been evacuated because of fire.

“Both O’Hare and Midway International Airports are in a ground stop, meaning no arrivals or departures,” it said.

At Midway, Southwest Airlines has suspended flights until noon, the statement said.

The AP says that at O’Hare’s Terminal 3, long lines formed at ticket counters.