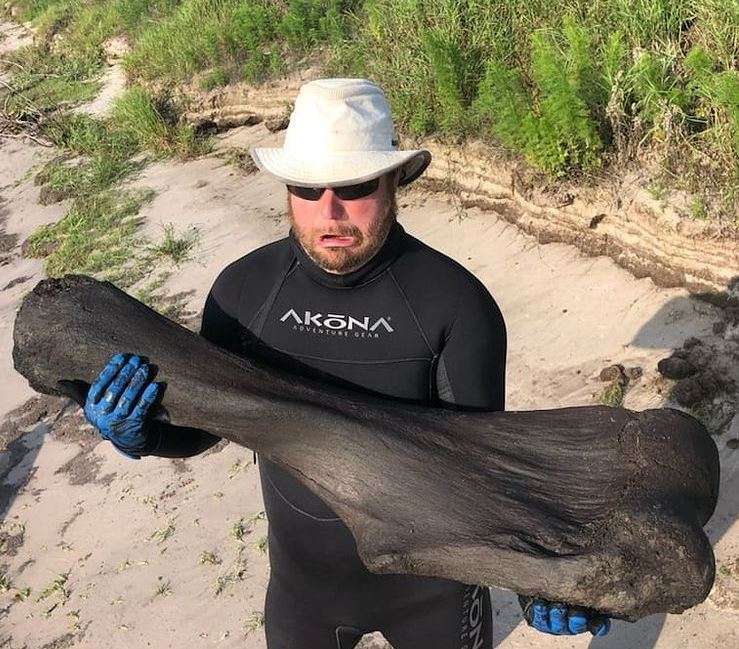 A pair of amateur fossil hunters caused a stir a few weeks ago when they found an ancient mammoth bone in the Peace River. That’s not all they found buried in the mud. Near the mammoth bone was part of a saber tooth tiger fang.

Derek Demeter, the director of the Seminole State Planetarium and Henry Sadler, who teaches 5th- 7th grade science at Admiral Farragut Academy in St. Petersburg, join Intersection to talk about diving for clues to Florida’s ancient past and inspiring the spirit of exploration with their discoveries.

Demeter says the bone belongs to a Colombian mammoth: the largest elephant that ever existed.

“This thing is massive, 22,000 pounds, you know, can be as tall as 13 to 14 feet tall. And what we found, we believe based on other paleontologists confirmations that it’s a humerus bone, but we can’t say that 100% sure until we get it fully identified.”

Sadler says he knew what it was immediately, because he’s found a mammoth bone in the river before.

Sadler said this time he was crawling over a rotten palm tree on the bed of the river, “and the next thing I touched was a hard, solid bone, and I instantly knew what it was just because of my prior experience.”

Sadler says about a foot and a half of the bone was poking out of the mud on the river bed.

“As soon as I touched it, my visibility, which was about six inches, turned to turn to zero. And I was just trying to feel it out. I’m trying to figure out where it was and not lose it in all that darkness.”

One way to check if something is a fossil or not? Lick it, says Sadler.

“It’s actually a technique that they teach you when you’re learning about this kind of stuff. But if your tongue sticks to it, it’s more likely to be a fossil than not because of how porous it is.”

Fortunately they didn’t need to do that with this one.

One of the other finds from the dive was part of a saber tooth tiger canine, which Sadler says was the real highlight of his day.

“It’s an insane find, if you think about the ratio of predator to prey,” he says.

Whether fossil hunting or astronomy, Demeter says he’s always been drawn to exploration and discovery.

“Ever since I was a kid, I had a huge imagination,” says Demeter.

“I just I have a very visual imagination where I could just, you know just see myself in time and space.”

“Whether it be looking, you know, hundreds of thousands of years, millions of years, billions of years, I always just find it amazing. And what’s really neat about fossil funding, unlike astronomy, is you can touch – or you can even lick it if you want to.”

Demeter says scuba diving is a bit like space exploration.

“You’re going into this new world, and it’s dark and it’s kind of mysterious. And so, you know, this is to me, like one of the closest things I have, you know, to explore like an astronaut. So, for me, it’s just that feeling of going somewhere, seeing something that no one else has seen or touched. It’s just exhilarating.”