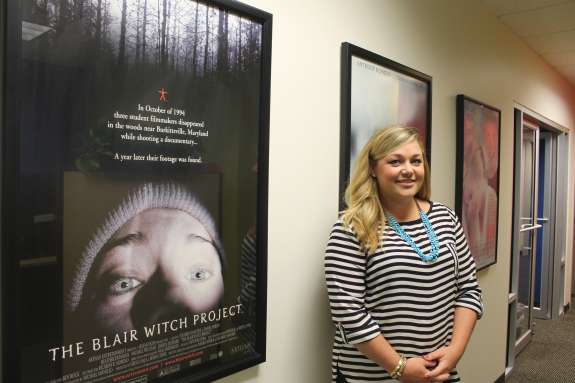 When the Florida House ended its session early, citing irreconcilable differences over health care- a lot of other bills got left behind.

But there’s still hope in the film and television industry that an incentives deal to bring more production to the state can be salvaged.

Samantha Goodowens is a producer and production manager. Her office is in her guest house in her backyard in Winter Park.

“My mom says I work in my garage, and I say I work in the pool cabana,” said Goodowens, who mostly produces TV commercials.

She pointed to a Cheerios commercial filming in an oat field near Gainesville. It takes an army of people to make a 30 second TV spot.

“You have a camera department, grip and electric, cranes, drones, video assist, you have a script supervisor, big full art department with prop people,” she said.

And don’t forget the production assistants: “to make it all work, and go get your Starbucks; and your talent, and of course you’ve got a dog. Because how can you have Cheerios and a happy family without a dog?”

All of these people came from all over the state.  Goodowens said it’s harder to find talented people in Florida because a lot of them left for other states- ones that offer tax incentives for film and television production.

Producer Kim Dawson moved to Orlando in the late ’80s to produce the Mickey Mouse Club. That’s when Disney and Universal were driving the industry in Florida. But since incentives came along, other Southern States took the lead.

“Starting in Louisiana and then merging into Georgia, South and North Carolina and now Mississippi, Alabama, they all have incentives,” said Dawson.

The conservative group Americans for Prosperity is one of the most strident critics of film incentives.

“Michigan just voted to end its program, North Carolina and Maryland have both scaled back their programs,” said Melissa Fausz, policy analyst with AFP’s Florida chapter.

“If these programs are truly effective in creating long term employment for the film industry, then I don’t think it’s something that we would see all these states scaling back on,” said Fausz. She said the return on investment for incentives programs is poor.

A study by the Florida Office of Economic and Demographic Research found for every dollar spent on tax credits in the last program- only 43 cents came back. For the Sales Tax Exemption, the ROI was 54 cents.

Sheena Fowler, Director of Film and Digital Media at the Orlando Film Commission, said the new incentives program is better value for the state.

“We’ve taken a look at the ROI, that hasn’t been favorable in any of the reports, even though they’re not looking at the whole scope, we wanted to make sure it was maximized through this program,” said Fowler.

The 2010 incentives program was supposed to last until 2016, but the nearly $300 million in tax credits is all gone.

Fowler said now, rather than being first come, first served, applications for credit would be ranked in order. More points would be awarded for filming in rural parts of the state, to spread the work around.

Director Michael Finn said a lot of people in the industry have been “hanging on here in Florida, hoping that it’s going to come back.”

“Because, you know, we have lives here,” said Finn.

“I have a house, my wife has a good job that she loves, my son’s in school. And so, we all want to work here, you know, and we’re just hoping that Florida does the right thing and makes it happen.”

Finn said any movie crew that comes to town will spend money- on hardware, hotel rooms, restaurants- whether it’s a $3 million film or a $300 million film. But Americans For Prosperity said a lot of the money goes straight back to Hollywood.

The early finish for the Florida House killed a lot of other unfinished bills. But Film industry insiders are holding out hope theirs will get another look when the legislature returns for a special session.