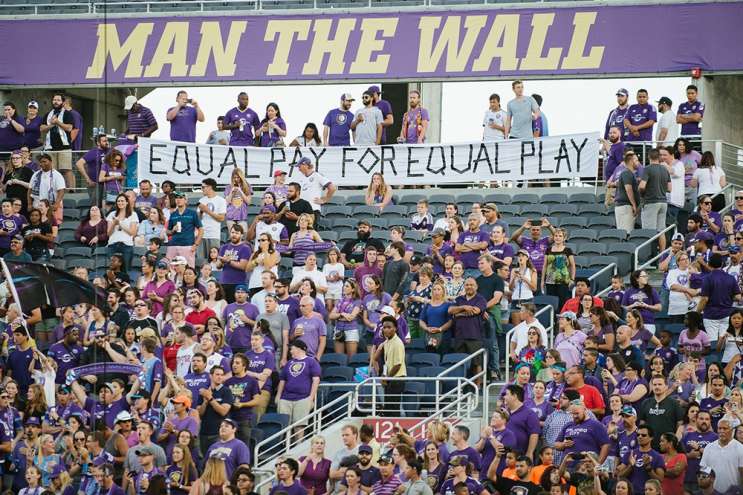 As the Orlando Pride women’s soccer team won their home opener April 23 in front of a record-breaking 23,000 fans, a handmade sign held up near the back of the stadium reminded everyone something was still not settled.

Five U.S. Women’s National Team soccer players – including Orlando Pride forward Alex Morgan – have filed a federal complaint to the Equal Employment Opportunity Commission, claiming they are paid 4 times less than their male counterparts. Match attendance, TV viewership and team profits are comparable between the men’s and women’s teams—not identical, but not four times less. And while the women’s team has won the FIFA World Cup three times, the men’s team never has.

As player Hope Solo put it, “The USMNT gets paid more to just show up than we get paid to win major championships.”

“Our beef is not with the men’s national team,” player Carli Lloyd says. “It’s with the federation, and its history of treating us as if we should be happy that we are professional players and not working in the kitchen.”

Criticizing women for speaking up about the wage gap implies that women should be grateful simply to have jobs. But if you’re expected to do the same job, you should be able to expect the same pay.

A recent Cornell study that found when large numbers of women enter jobs traditionally held by men, pay declines across the board. Maybe those male soccer players should start worrying.