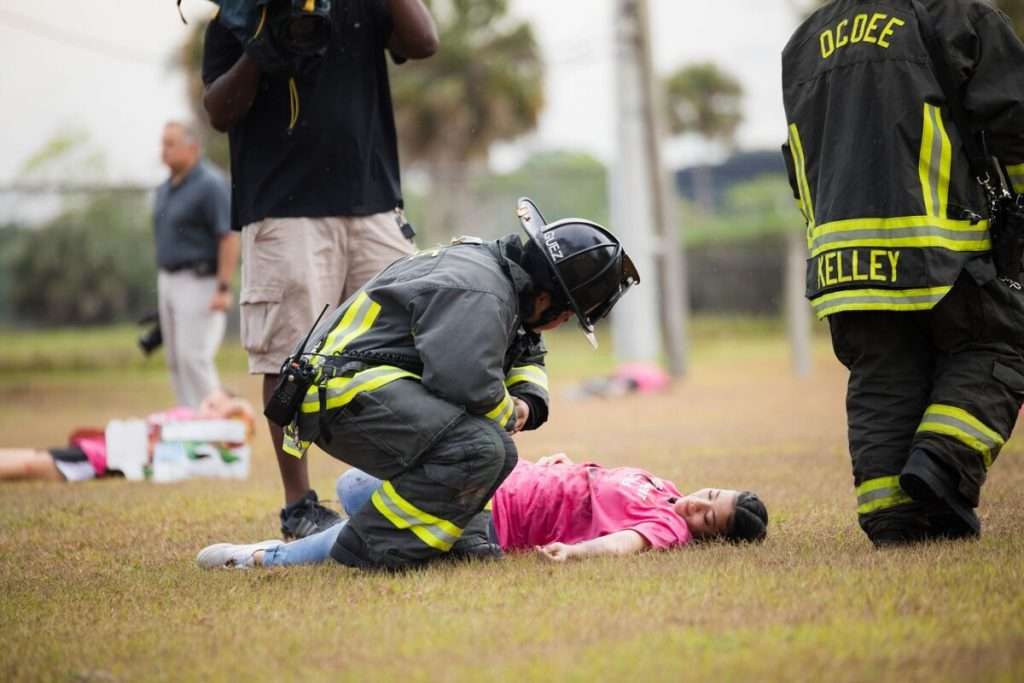 More than 1,200 volunteer victims drilled for a possible dirty bomb in Orange County earlier this year. Training drills like this one will be a requirement under a new federal rule. (Photo by Albert Harris, Orange County)

Mass shootings, wildfires, hurricanes — it’s not the end of the world, it’s just the world we live in. And the federal government wants to make sure the health care industry can respond.

The U.S. Centers for Medicare and Medicaid Services next week will be able to do inspections on what’s called the Emergency Preparedness Rule. That means CMS will be able to impose fines, and possibly shut down, nearly any health care facilities that isn’t ready for a disaster. The rules are years in the making.

Eric Alberts is in charge of emergency preparedness at Orlando Regional Medical Center, which got 44 patients from the Pulse nightclub shooting. He supports the federal rule requiring health care organizations have a plan.

He’s surprised at how many hospitals and clinics across the country don’t have one.

“Some of the latest things I’ve heard is CMS rule, what CMS rule?” Alberts said. “I shake my head in fear and think what about the community here? They’re expecting you to be able to care for them when something bad like this happens like Vegas or here with Pulse.”

Health care facilities will now have to do a risk assessment for all hazards: cyber-attacks to hurricanes to active shooters.  They need an emergency plan for what to do, and how to communicate during a crisis.

And the plan can’t just be ink on paper.  They have to do training and drilling every year.

Alberts says if the rule had been in place before the Pulse nightclub shooting, “I think it would have helped, it definitely would not have hurt,” he said. “And when you look at the other health care organizations like nursing homes that unnecessarily had people die in their facilities during storms and hurricanes, this rule really speaks to that and says you need to wake up and have a plan.”

And when you look at just the last year, with nursing home deaths in South Florida, flooding from Hurricane Harvey, the mass shootings in Texas and Las Vegas – Alberts predicts regulators are going to come down hard on organizations that aren’t meeting the new rules.

“I think there’s gonna be some hefty fines, and that’s when hospitals will wake up and go on panic mode.”

But the rules don’t just apply to hospitals and nursing homes. Seventeen different kinds of health care organizations are covered in this rule, from dialysis centers and psychiatric treatment facilities to home health agencies and hospice programs.

Melissa Harvey is the director of the Division of National Healthcare Preparedness Programs
Office of the Assistant Secretary for Preparedness and Response at the U.S. Department of Health and Human Services. She said one reason the rule applies to so many different parts of the health care sector is because they were preparing in a vacuum.

A good example of this was during the Swine Flu, or H1N1, outbreak in 2009. The pandemic was particularly nasty, causing more than 270,00 hospitalizations and more than 12,000 deaths in the U.S.

“One hospital would tell us we had no ICU beds left and one ventilator and they don’t know what they’re gonna do if they get two patients who need that ventilator, how are they gonna make that call,” Harvey said. “And we’d go to a different hospital owned by a different corporate partners just a few blocks away to find they had 30 ICU beds and plenty of ventilators. And those two hospitals had absolutely no idea.”

Another example was the 2012 Derecho storms in the mid-Atlantic. Hospitals fared alright after the storm, but ERs were overrun with people who needed dialysis while their regular outpatient centers remained without power.

“Again, not a weather system that should cripple the health care system, and it certainly didn’t cripple the hospitals and [nursing homes] around here, but it was more the outpatient centers where the outpatients wound up in the hospitals and overwhelming the inpatient beds,” Harvey said. “Which is a problem, because heart attacks and strokes and car accidents and the things emergency rooms really exist for don’t stop during weather emergencies.”

So now, the new emergency preparedness plans in Florida will be reviewed by health care coalitions – groups with health departments and emergency planners and multiple health care groups sitting at the same table.

And many of these health care organizations weren’t required to have emergency plans before this. That means they’re starting from scratch.

Eric Cote, the project director with Powered for Patients, a nonprofit that helps health care facilities with backup power plans, said the debate in Florida over nursing home generators is a good example of states going above and beyond the federal rules.

“The new CMS emergency preparedness rule is a reflection of painful lessons learned,” Cote said. “And I think this stepped up planning is going to benefit patients in the long run, and that is certainly a positive outcome.”

Ready or not, the rules go into effect next week.