Feds: Dunnellon man a leader in conspiracy by Oath Keepers for Jan. 6 attack on U.S. Capitol 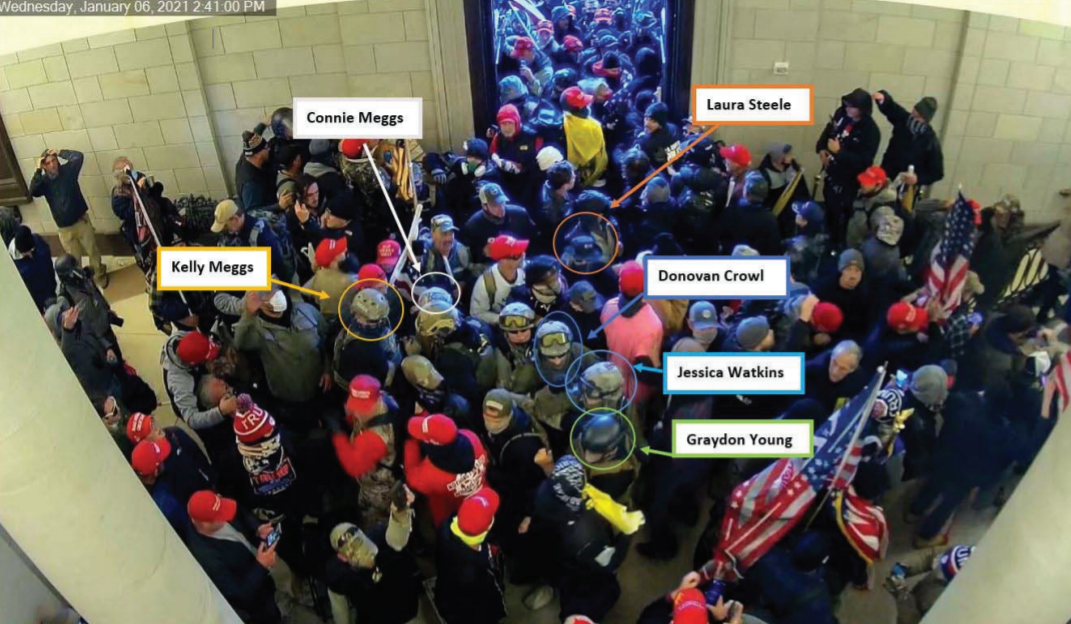 A Dunnellon man — the self-described leader of the Oath Keepers in Florida — has been charged along with his wife and seven others with conspiracy for the Jan. 6 attack on the U.S. Capitol.

Kelly Meggs is shown in this photo from the Marion County Jail..

Fifty-two-year-old Kelly Meggs of Dunnellon, who manages a Lake City car dealership, and his 59-year-old wife, Connie, were arrested Wednesday afternoon. They remained in the Marion County Jail Friday night, according to jail records.

A superseding federal indictment filed Friday in Washington, D.C., charges the nine with conspiracy to commit an offense against the United States by impeding Congress’ certification of the Electoral College vote.

They also face several other charges related to breaching the Capitol.

The FBI describes an operation planned in advance by members of the Oath Keepers, an anti-government extremist group. The documents detail careful coordination, discussion of an armed quick reaction force on standby, and the use of a military formation as they entered the building in tactical gear.

The alleged conspiracy involved coordination with Oath Keepers from other regions, training in paramilitary combat, protective gear, and communication by hand signals and the Zello walkie-talkie app.

FBI officials say members of the Oath Keepers used a stack or line formation while climbing the steps to the Capitol on Jan. 6. In this image from a criminal complaint, the red oval encircling the Oath Keepers was added by the FBI.

They saw themselves as responding to then-President Donald Trump’s call to stop the certification of Joe Biden as president-elect.

On Dec. 25, he sent a message saying he had been named the “State lead of Florida.” He said they would have “at least 50-100” Oath Keepers there.

The indictment describes the Oath Keepers as a “large and loosely organized collection of individuals,” including militia members, that focuses on recruiting “current and former military, law enforcement, and first-responder personnel.”

Some members believe the conspiracy theory “that the federal government has been coopted by a cabal of elites actively trying to strip American citizens of their rights,” according to the indictment.

Wilson anticipates that prosecutors will seek to keep Meggs in jail “as a danger to the community.” The lawyer argues against that, saying he has lived at least 12 years in Dunnellon, where he has a home and two minor grandchildren who depend on him.

He also has two adult children in Marion County, Wilson wrote, and at least 11 years with the dealership. Wilson said Meggs has no criminal convictions and no history of substance abuse, though he does use cannabis to help him sleep.

Detention hearings are set for Kelly and Connie Meggs in Ocala Monday morning.