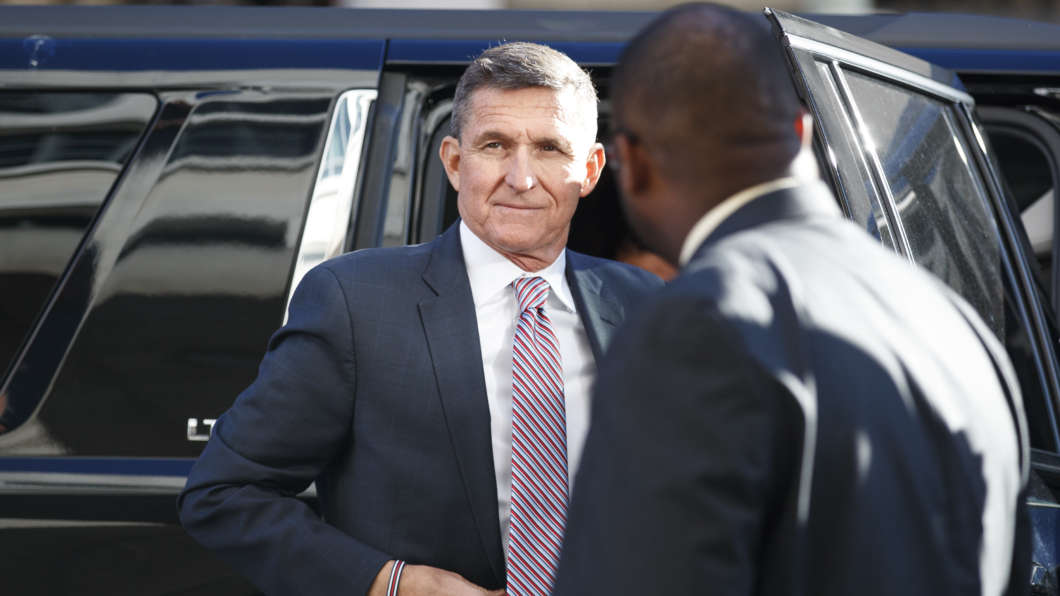 A federal judge delayed sentencing former national security adviser Michael Flynn on Tuesday after he pleaded guilty to lying to investigators about his talks with Russia’s ambassador.

U.S. District Judge Emmet Sullivan said he has significant outstanding questions about the case, including how the government’s Russia investigation was impeded and the material impact of Flynn’s lies on the special counsel’s inquiry.

Flynn had spent more than a year giving what prosecutors called all the cooperation they wanted, including in 62 hours of meetings and the production of “sweeping categories” of documents and electronic devices.

In light of that accommodation, the Justice Department had told the judge ahead of Tuesday’s hearing that it would be all right if Flynn received no prison time.

Flynn, in his filing, also asked for leniency.

But the judge was less certain about the extent of Flynn’s assistance — and the seriousness of the offense.

In a remarkable series of exchanges, Sullivan asked whether Flynn and his legal team wanted to push off the punishment, declaring that he was not bound by advisory guidelines that called for a maximum of six months in prison.

Ultimately, the judge directed both sides to file a status report by March 13.

Flynn’s attorney Robert Kelner said that Flynn may testify in the case prosecutors are making in the Eastern District of Virginia against two of his former business associates. They were charged in documents unsealed on Monday with a scheme to act as unregistered agents for Turkey.

Flynn has been a model cooperator with the Justice Department, his lawyer said, and if he serves as a government witness in the Turkey lobbying case, that may be “the only area where there’s something left to give,” Kelner said.

“General Flynn has held nothing back, nothing, in his cooperation with the special counsel’s office,” Kelner said.

Judge Sullivan entered the courtroom with what he said were a number of concerns that he said called into question the guilty plea “or, at the very least, [Flynn’s] acceptance of responsibility.”

The judge repeatedly asked Flynn and his lawyers whether they wanted to take a recess to confer about legal issues or the prospect of a delay until his full cooperation with authorities could be assessed.

Sullivan also stressed Flynn’s service in the military and at the White House, where his false statements were made.

This was “a high-ranking senior official of the administration making false statements to federal agents while on the premises of the White House,” the judge said.

“I’m not hiding my disgust, my disdain, for this criminal offense,” he added.

At another point, the judge asked prosecutor Brandon Van Grack whether Flynn’s conduct might have amounted to “treason” and the judge also suggested Flynn may have been acting as a foreign agent during his 24 days in the Trump White House.

Van Grack responded that Flynn’s undeclared lobbying work for Turkey ended before his stint in the White House, and that “the government has no reason to believe that the defendant has committed treason.”

The judge later said he was merely asking the questions, not drawing any conclusions.

Flynn, one of nine children from a close-knit family, welcomed several of his siblings when he entered the courtroom. His wife and son sat in the first row, closely observing the proceedings and at times, shaking their heads.

The father of one of the prosecutors also secured a seat in the packed courtroom, greeting his son with a handshake during a recess.

The delay in the sentence came as a surprise following the public buildup ahead of the hearing.

In a tweet Tuesday morning prior to the hearing, President Trump had wished Flynn “good luck today.”

Trump added: “Will be interesting to see what he has to say, despite tremendous pressure being put on him, about Russian collusion in our great and, obviously, highly successful political campaign. There was no collusion!”

Talks with the Russian ambassador and the aftermath

The root of Flynn’s legal troubles stem from conversations he had as part of the Trump administration-in-waiting, a team that had won the 2016 election but not yet assumed office.

As the outgoing Obama administration sought to punish Russia for its attack on the election, Flynn was negotiating with Moscow’s then-ambassador to the United States.

Obama ordered the ejection of a number of Russian diplomats and the closure of facilities they used in New York and Maryland.

In concert with the transition team, Flynn asked then-Ambassador Sergey Kislyak not to escalate any response that Moscow might make to the punitive measures being imposed by Obama.

That may technically have violated a never-enforced law that bars Americans without official power from negotiating with foreign governments or their agents, but it was Flynn and his compatriots’ accounts of the talks that caused the most pressing political trouble.

First, word of Flynn’s conversation made its way into The Washington Post.

Flynn responded by denying that he and Kislyak had talked about the sanctions, including to then-Vice President-elect Pence, who repeated the denial on TV.

Top federal law enforcement officials, however — who knew what had been said from surveillance of Kislyak — feared that Flynn’s public denials put Russia in the position of having something with which it could compromise Flynn.

The rest of the story has lately been filled in by court filings: Flynn phoned then-Deputy FBI Director Andrew McCabe to talk about something else in late January 2017 and then McCabe steered the conversation to Flynn’s contact with the Russians.

“LTG Flynn then explained that he had been trying to ‘build relationships’ with the Russians, and that he had calls in which he ‘exchanged condolences,’ ” McCabe wrote, according to a memo McCabe filed at the time. “He then stated that I probably knew what was said,” after which the sentence is redacted.

Two FBI agents visited Flynn at the White House, according to court documents.

They said they wanted him to be at ease and did not warn him that it was a crime to lie to the FBI; “They were concerned that giving the warnings might adversely affect the rapport,” according to a report about one of the agents.

Criticism of the Flynn interview

The agents’ decision not to remind Flynn that it’s a crime to lie to the FBI has become the subject of criticism, as has the sense that the investigators reportedly got when talking to him that he was not lying.

That has prompted Trump and others to charge that the Flynn case amounts to entrapment.

Mueller’s office submitted documents in which it laid out the series of events and asserted that if anyone knew to tell the truth to the FBI, it was Flynn — a career intelligence officer who had previously served as the director of the Defense Intelligence Agency.

White House press secretary Sarah Sanders stuck by the administration’s criticism about the handling of the interview on Tuesday.

Sanders told reporters that the administration wished Flynn well but she repeated that the FBI had “ambushed” Flynn. Sanders also said the FBI violated its own protocols in the way it questioned him.

Criticism of the investigators

One of the FBI agents who took part in the interview was Peter Strzok, then a deputy assistant director in the counterintelligence division.

He has become a political albatross around the neck of the FBI following the discovery of outspoken text messages he exchanged with another FBI employee that criticized Trump as a candidate.

The revelations embarrassed the bureau and Strzok was fired in August. Lisa Page, the FBI attorney with whom Strzok exchanged the incendiary text messages, resigned. McCabe is likewise no longer with the FBI, having been fired in March just short of being eligible to retire, a termination he is fighting in court.

Strzok’s role in the investigation has led to sustained criticism by Trump and his allies that a biased cadre of the conspirators within federal law enforcement are perpetuating the Russia investigation out of political animus.

Former FBI Director James Comey was asked Monday about the decisions made at the top level of the bureau at the time of the Flynn interview.

Why, for example, as court documents describe, did Comey not tell then-Acting Attorney General Sally Yates before the Flynn interview that it was happening?

He meant to, but Yates phoned Comey about something else, and it was during that conversation that the director told her about the Flynn situation.

“When he told her the FBI was interviewing Flynn she was not happy,” reads the account released on Friday.

Comey said Monday that he wanted to be clear the FBI was initiating the Flynn interview because it would deny the White House the ability to argue that people like Yates, who were holdovers from the Obama administration, were pursuing Flynn for partisan reasons.

What Comey said he didn’t expect was that Trump and some powerful Republicans in the House would launch a sustained attack on the FBI itself.

“The FBI’s reputation has taken a big hit because the president and his acolytes have lied about it constantly,” he told reporters at the Capitol. “In the face of those lies, a whole lot of good people … believe that nonsense. That’s a tragedy.”

Comey — like McCabe and Strzok — left the FBI involuntarily when he was fired by Trump in May 2017, a move that precipitated the appointment of Mueller as special counsel to take over the FBI investigation of the Russian attack on the 2016 election begun during Comey’s tenure.