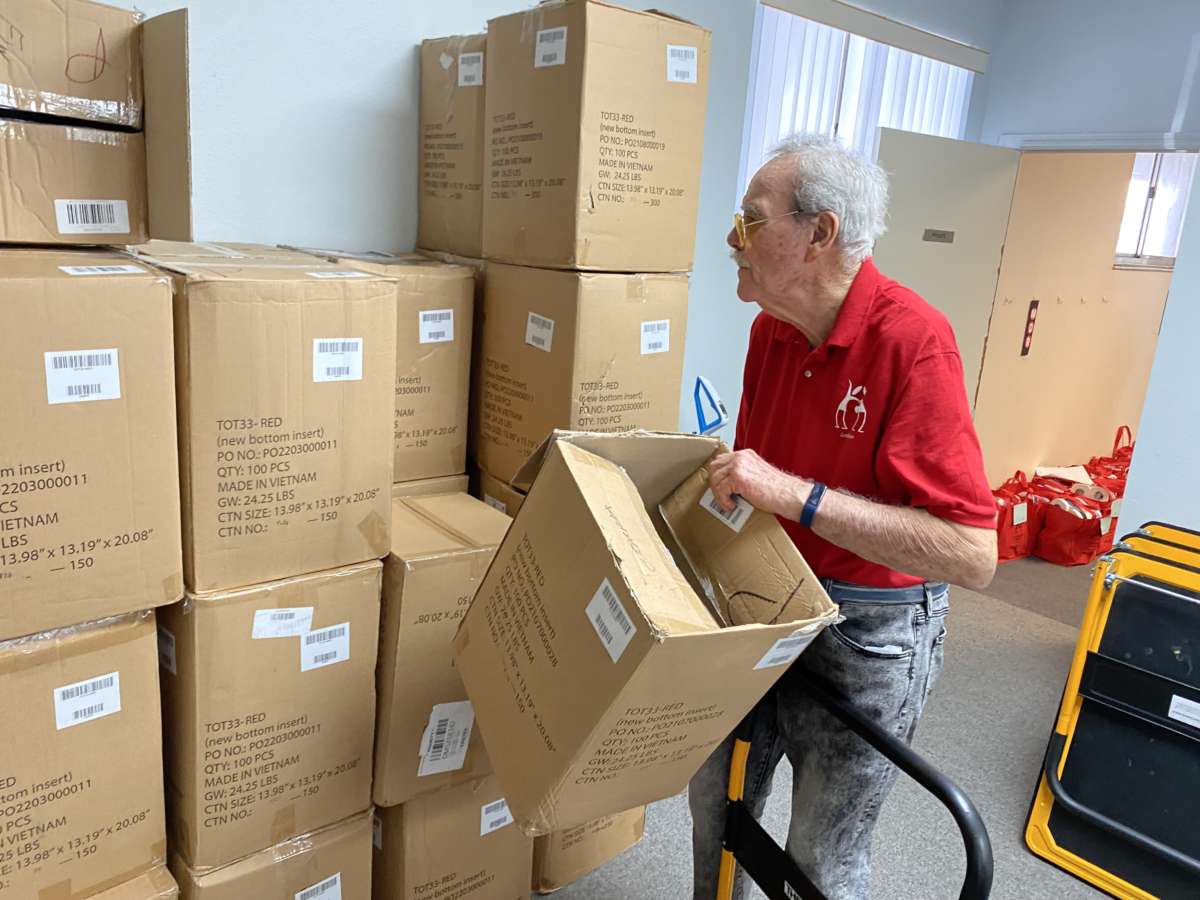 We met there to talk about over-the-counter hearing aids. LovExtension President Linda Krupski and her sister were there, too.

“He was just telling us he almost got hit by a truck yesterday,” Krupski said.

Jones had experienced what he calls a close encounter with God two days earlier, while crossing a highway near his home in Eustis.

“[T]here it was right in front of me,” Jones said. “And I had like a, just a wind right here, just in front, like it stopped me. My daughter said that was the Holy Spirit. Amazing. I would have been in the hospital today or I would have been where I want to go, which is up with the Lord.”

Jones blames his eyes. He says he has glaucoma and has to have surgery.

But Jones didn’t hear that truck either. And though he has gone to an audiologist a few times and might benefit from hearing aids, he says the high cost has held him back.

“When I’m in one-to-one talking in a room, I have no problem,” he said. “But it’s when we get a dozen people all talking at the same time I have a hard time hearing. And my telephone, I have to turn the speaker up.”

Those things — plus turning the TV up so it’s too loud for other people or asking them repeatedly to repeat themselves — are signs of mild to moderate hearing loss, according to Barbara Kelley, executive director of the Hearing Loss Association of American. It’s something that creeps up on many of us as we get older.

“I think a very good reliable sign is when our friends and family are telling us, you know, I think you have a hearing loss,” Kelley said. “Often our reaction is, ‘Oh, but you’re mumbling.’ But you know take those clues from your family and friends very seriously.”

Kelley’s consumer group has advocated for years for over-the-counter hearing aids. Now the FDA has authorized them — establising the new category of devices —  and they could be in stores as soon as next month.

The non-prescription hearing aids for adults are expected to bring the cost down from thousands of dollars to hundreds of dollars.

Hearing aids are not paid for by Medicare, though some Medicare Advantage plans do cover them.

Unlike prescription hearing aids, these over-the-counter devices won’t necessarily come with the valuable assistance of an audiologist or hearing aid specialist. And you may still need that help.

Some tips from the American Academy of Audiology

Kelley says you should check the packaging for FDA approval and, because it can take time to see if a hearing aid works for you, make sure there’s a good return policy.

She says seniors can be deterred by the feeling that hearing aids will make them look old.

The FDA hopes the marketplace will inspire innovation.

Kelley hopes it will get the vast majority of people with hearing loss, who don’t have hearing aids, to take that first step and that seniors will make hearing health a priority “just like we do blood pressure and weight and cholesterol levels and everything else that we do to stay healthy as we age.”

It does matter. The National Institute on Deafness and Other Communication Disorders says hearing loss is associated with dementia, increased falls, reduced mobility, depression, isolation and anxiety.

Krupski, whose nonprofit delivers food and supplies to hundreds of homebound seniors, says many have lost a spouse and are living alone. Hearing loss makes it hard for them to socialize or attend religious services.

“They don’t go out,” she said. “And the more they regress to their homes, the more depression sets in.”

She said some find it hard to afford even the less-expensive over-the-counter hearing aids. But she believes that, if the prices come down and they really work, many low-income seniors will find a way to buy them.