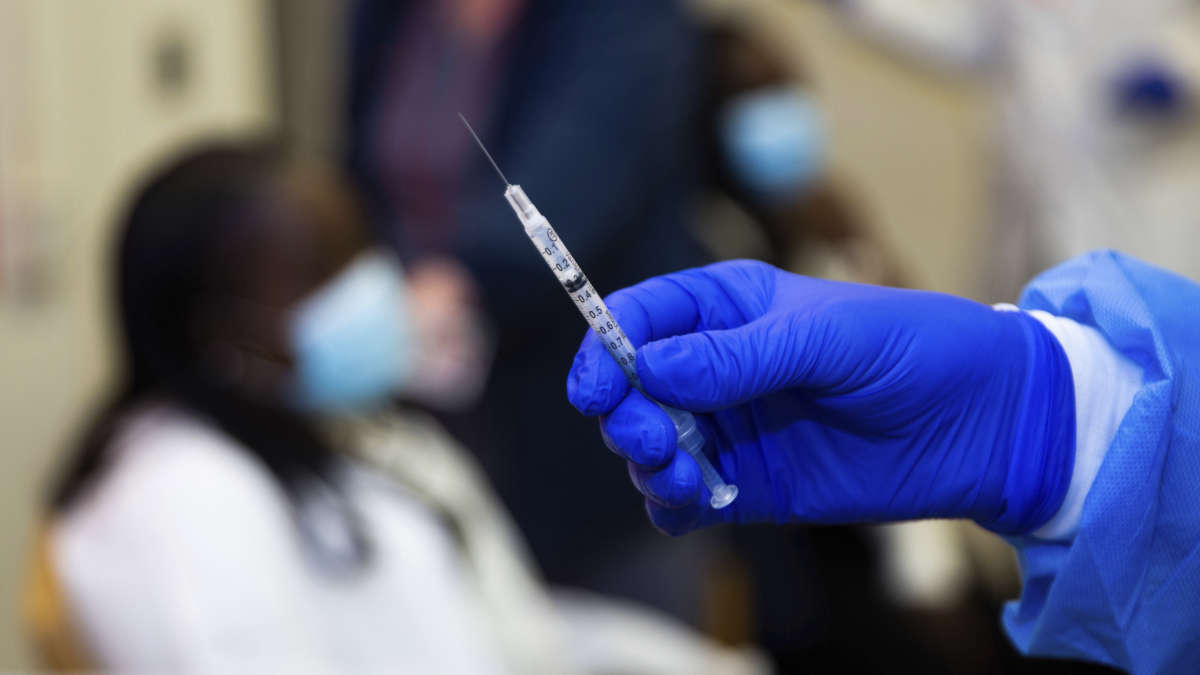 A doctor prepares to administer a vaccine injection at New York-Presbyterian Lawrence Hospital in Bronxville, N.Y., in January. The Food and Drug Administration has approved emergency use authorization of the Pfizer/BioNTech vaccine for patients ages 12 to 15.
Image credit: Kevin Hagen

The Food and Drug Administration said Monday that children 12 to 15 years old are now eligible to receive a key COVID-19 vaccine as the agency expanded its emergency use authorization for the Pfizer/BioNTech vaccine.

Dr. Janet Woodcock, the acting FDA commissioner, said the expansion “brings us closer to returning to a sense of normalcy.”

“Parents and guardians can rest assured that the agency undertook a rigorous and thorough review of all available data, as we have with all of our COVID-19 vaccine emergency use authorizations,” Woodcock said.

Until now, the Pfizer vaccine had been authorized only for people age 16 and older. Pfizer asked the FDA to broaden its emergency use authorization for the vaccine after announcing in late March that clinical trials found “100% efficacy and robust antibody responses” in study participants who were 12 to 15.

The FDA first granted Pfizer’s request for an emergency use authorization for its COVID-19 vaccine in December. It got federal approval to include children as young as 12 in its vaccine trial in October.

All three makers of U.S.-authorized vaccines — Pfizer, Moderna and Johnson & Johnson — are studying the safety and effectiveness of their vaccines in children, including as young as 6 months.

Johnson & Johnson said last week that its vaccine “will initially be tested in a small number of adolescents, which will be expanded to a larger group in a step-wise approach, if initial data shows an acceptable safety profile.”

Those expanded trials started last month when J&J vaccine shots were given to teens from 16 to 17. If all goes well, the trial will include kids as young as 12, the company said.

Moderna said in mid-April that its vaccine study in adolescents is now fully enrolled, with around 3,000 people ages 12 to 17 slated to receive doses. A second phase of the study will follow, including children who are from 6 months to 11 years old.

Pfizer said it won’t be ready to ask the FDA for new emergency use authorization expansions for kids younger than 12 until September. One such request would cover children from 2 to 5 years old; a second would apply to ages 5 to 11. A third request, aimed at protecting infants and toddlers, isn’t expected until the fourth quarter of this year.

Pfizer and BioNTech said they have the capacity to manufacture up to 2.5 billion vaccine doses in 2021, and to produce at least 3 billion doses in 2022.

In another move that could boost COVID-19 vaccine availability, Pfizer recently asked the FDA to approve a change that would allow its vaccine to be stored at common refrigerator temperatures of 2 to 8 degrees Celsius (roughly 36 to 46 degrees Fahrenheit) for up to four weeks. The company said it submitted data about the vaccine’s stability at those temperatures on April 30.

In general, Pfizer’s vaccine must be stored at ultra-cold temperatures of around -70 degrees Celsius (-94 degrees Fahrenheit). The company loosened that requirement a bit in February, however, saying the shots, which use messenger RNA, could safely be kept at typical home freezer temperatures, -25 to -15 degrees Celsius (-13 to 5 degrees Fahrenheit), for up to two weeks.

The COVID-19 vaccine’s success has brought billions of dollars to Pfizer. In the first quarter of 2021 alone, the vaccine added $3.5 billion in global revenue, Pfizer Chairman and CEO Albert Bourla told investors in a conference call last week. Over the entire year, Pfizer could bring in around $26 billion based on the vaccine, Bourla said.

The company and BioNTech, its development and revenue-sharing partner, have shipped some 430 million doses to 91 countries and territories, Bourla said last week.