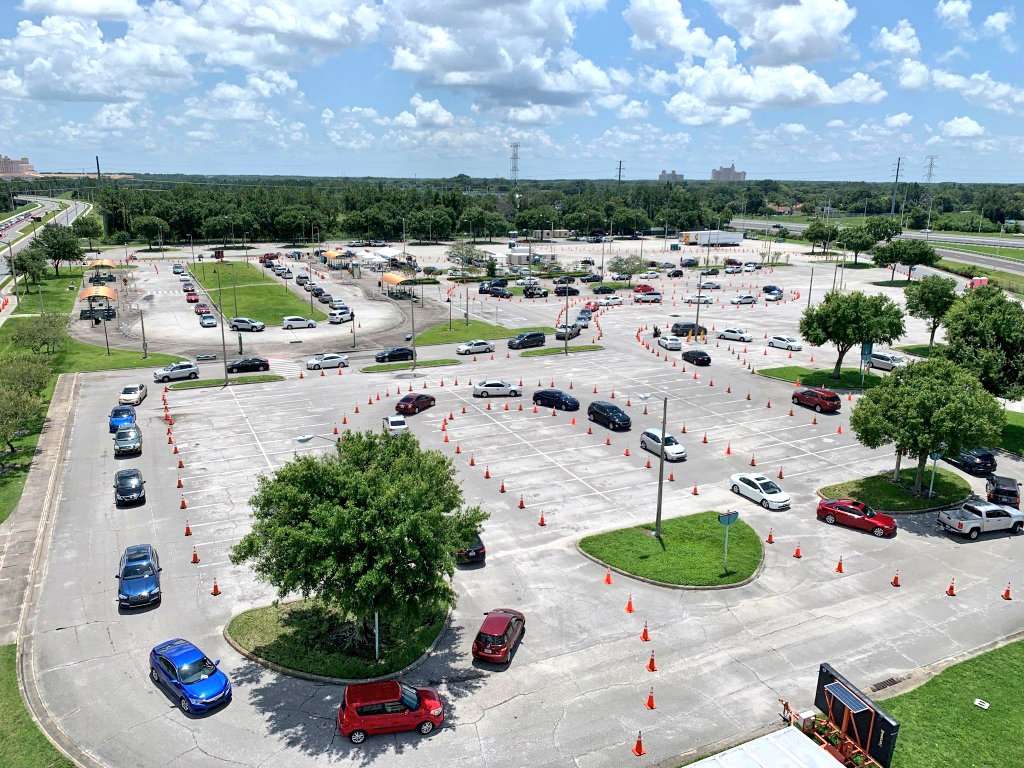 The Health Department has provided 125,000 of them. And the county wants to promote face coverings in public and social distancing as COVID-19 cases continue to rise.

At a commission meeting Tuesday, residents pushed for a county mask mandate.

But Commission Chair Leslie Campione insisted mask wearing is not a silver bullet.

“Everybody needs to be realistic about the idea that these things are being worn properly or not worn properly,” she said. “And I think probably the biggest danger of all is a false sense of security, that because you have it on now you can now get super close to somebody.”

The free masks — one per person — are part of a pilot program, she says, and the county may purchase more.

They are also available at the Lake County Agricultural Center in Tavares and the county transit office in Fruitland Park.

Florida added another 7,361 new coronavirus cases in residents in the latest figures reported by the Florida Department of Health.

63 deaths were reported Monday, bringing the fatality count to 3,841 residents. A total of 3,943 people have died from COVID-19 in Florida.

Statewide, 43 hospitals have no beds available in the intensive care unit. That includes five hospitals in Orange and Osceola counties.

The hospital with the most ICU patients and zero capacity in Central Florida is Orlando Regional Medical Center in downtown Orlando.

According to figures reported to the Agency for Health Care Administration, ORMC has 65 patients in the ICU – and no beds available.

Orlando Health says that as the number of patients dropped in March, it consolidated and reduced the number of ICU beds that were staffed and in operation.

In a statement, Orlando Health said it has 200 ICU beds available, and can surge up to 500 ICU beds if needed.

In a press conference this week, the health officer for Orange County, Dr. Raul Pino said the total number of people hospitalized in Orange County has more than doubled in the last two weeks, from 164 patients two weeks ago to 356 now. The number of ICU patients has also nearly doubled, with 74 ICU patients now.

Nationwide, there is a shortage of one of the only promising drugs against coronavirus, known as remdesivir.

That leaves the plasma of COVID-19 survivors as a frontline treatment.

But as hospitalizations for COVID-19 are rising, Dr. Kirk Voelker of Sarasota Memorial Hospital says convalescent plasma is running critically low and will soon have to be rationed.

“Before, when you came into the hospital if you required oxygen or were short of breath, you would get the convalescent plasma,” said Voelker.

Sarasota Memorial had 78 people in the hospital with COVID-19 as of Monday – a new record high for that hospital — including 16 in the ICU.

Voelker said plasma is needed from survivors of all blood types. Donations can be made at a blood bank 28 days after a person tests positive for COVID-19.

Major League Soccer  announced Monday that FC Dallas has been withdrawn from the MLS is Back tournament after 10 players and one staff member tested positive for COVID-19.

The tournament kicks off at the ESPN Wide World of Sport complex at Walt Disney World resort on Wednesday.

MLS said that 13 players out of 557 in Orlando for the tournament had tested positive for COVID-19.

Orange County Mayor Jerry Demings said on Monday that both the MLS and the NBA tournament, which is set to start on July 30th, will give sports-starved Americans some respite from the pandemic.

“If the leagues, and the players, and the staff believe that they can do it safely in consultation with the healthcare experts down, I say, why not try it.”

At a briefing Monday afternoon Demings said the county budget would be ‘flat’ for the next fiscal year.

“Another casualty of the pandemic will be the planned expansion of the Orange County Convention Center, as we knew it. The expansion project will be delayed at the very least,” he said.

Gov. Ron DeSantis said he doesn’t think President Trump was trying to minimize the pandemic when he said 99 percent of cases are “totally harmless.”

The Florida governor addressed that issue during a press conference in The Villages Monday.

Fact checkers have corrected the president’s assessment because — even though the overall infection fatality rate is estimated at under one percent — as many 20 percent of those infected have serious illness.

And, as DeSantis said, many of those are hospitalized.

“I’m not sure exactly what he meant,” DeSantis said. “You know, in Florida the case fatality rate is under 2 percent now, which is a lot lower than a lot of other states. Obviously, if you don’t die, some people have nasty illnesses and hospital stays. And we shouldn’t minimize that.”

Gov. DeSantis Tells Public Not To Worry, But Miami-Dade Moves to Close Down Gyms, Party Venues

Governor Ron DeSantis is on the defensive after Florida has had spikes in numbers of people testing positive for COVID-19 recently.

“You know, there’s no need to really be fearful about it. I mean, we can talk about the different steps that that individuals can take,” said DeSantis.

But Miami Dade County is taking steps to stop people from getting together in groups and spreading the virus.

Restaurant dining rooms and gyms will need to close down starting on Wednesday. As will ballrooms, party venues and short-term rentals.

Some South Florida hospitals announced plans to hold off on elective procedures to make room for more COVID-19 patients.

Ready or not, here comes the NBA into the Disney bubble. The first six teams are set to arrive Tuesday at the campus near Orlando, Florida.

Another eight teams will arrive Wednesday and the final eight on Thursday. For some teams, the getaway comes not long after the reality of the virus struck yet again.

Miami closed its facility late last week following positive test results, Milwaukee and Sacramento followed over the weekend after the same circumstance, and now seven of the 22 Disney-bound teams have had to shutter their practice gyms.