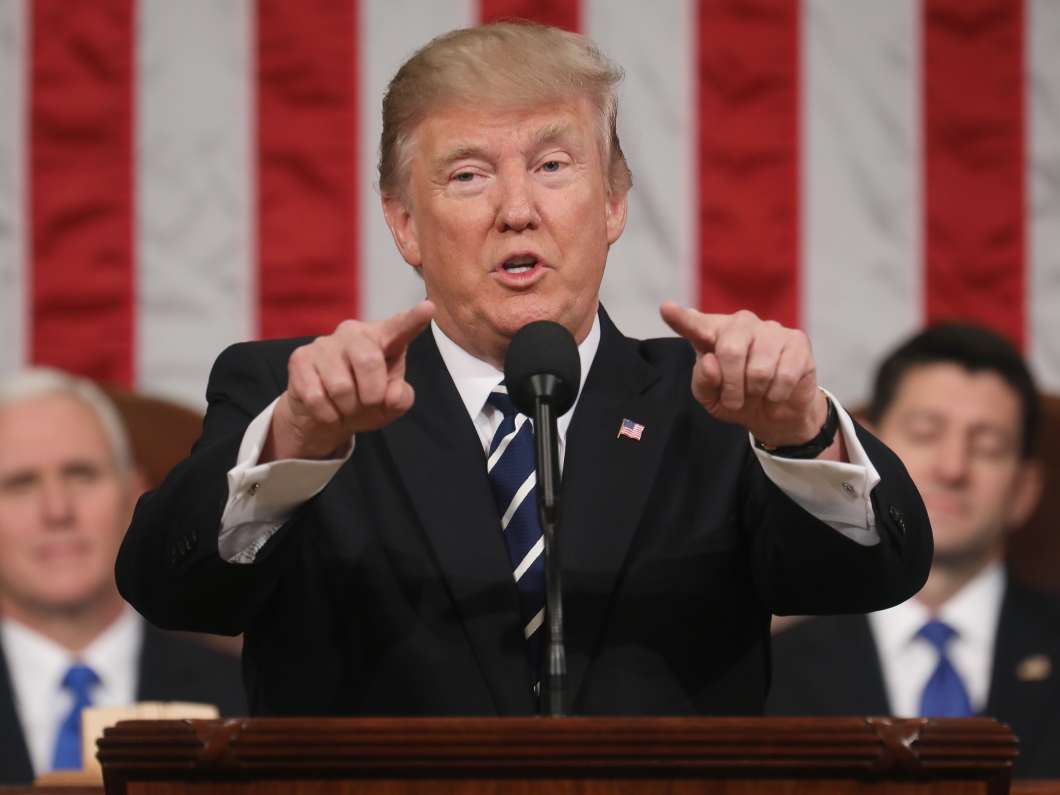 President Trump delivers his first address to a joint session of Congress on Feb. 28 in the House chamber of the Capitol in Washington, D.C.
Image credit: Pool

FBI Director James Comey has requested that the Justice Department publicly deny President Trump’s allegation that President Barack Obama had ordered a wiretap of candidate Trump, a law enforcement official confirms to NPR’s Carrie Johnson. The New York Times first broke that story. The Department of Justice has so far issued no comment on this development.

A day after President Trump tweeted, without any evidence, charges that his predecessor wiretapped his phones, the White House asked Congress to investigate whether the Obama administration had abused its investigative powers. The White House has yet to provide proof for the president’s claims, which were denied Sunday by the former director of national intelligence.

It’s not clear what reports he is referring to or what prompted President Trump’s explosive charges on Saturday. And the statement dials back several notches from what the president actually alleged on Saturday.

The White House went radio silent for the entire day following Trump’s early Saturday morning tweetstorm, not providing evidence or an explanation for the claims the president made.

Appearing on ABC’s This Week, principal deputy press secretary Sarah Sanders cited reports in a variety of news outlets, none of which went as far as what Trump tweeted.

“If this happened. If this is accurate, this is the biggest overreach and the biggest scandal,” Sanders said, again providing no evidence.

Asked where the basis of the president’s claims come from, Sanders said “I think he is going off of information that he’s seen that has led him to believe that this is a very real potential.”

“Very real potential” is quite different from Trump tweeting that a good lawyer “could make a great case out of the fact that President Obama was tapping my phones in October.”

In the Sunday morning statement, Spicer goes on to say “President Donald J. Trump is requesting that as part of their investigation into Russian activity, the congressional intelligence committees exercise their oversight authority to determine whether executive branch investigative powers were abused in 2016.”

The House and Senate intelligence committees are both headed by Republicans. They are currently investigating Russian meddling in the presidential election. Much like Trump’s claims earlier this year of widespread voter fraud, rather than provide proof or a basis for the president’s charges, the White House is asking for an investigation.

“All we’re saying is let’s take a closer look,” Sanders said on ABC.

Spicer concludes the statement saying neither the White House nor the president will comment further until the investigation is conducted.

Though, 40 minutes later, the press secretary tweeted about an interview on ABC that would seem to reinforce the president’s claim.

Mukasey was attorney general under George W. Bush and was a vocal critic of Hillary Clinton during the presidential campaign. What he actually said in the interview with ABC’s Martha Raddatz was more nuanced than Spicer’s tweet would make it seem.

“I think the president was not correct certainly in saying that President Obama ordered a tap on a server in Trump Tower,” Mukasey said. “However, I think he’s right in that there was surveillance and that it was conducted at the behest of the Justice Department through the FISA court.”

Mukasey said he based this assessment on news reports, meaning he had no direct knowledge.

On NBC’s Meet The Press on Sunday morning, James Clapper, the recently former director of national intelligence, said that to his knowledge there was no wiretapping on then-candidate Trump or his campaign. You can see a clip of his interview in the video below. When asked by host Chuck Todd if he could confirm or deny the existence of a court order authorizing electronic surveillance of Trump, Clapper said he could deny one existed, to his knowledge.

The statement from Spicer leaves more questions than it answers. Here’s a sampling of the questions NPR sent to the White House Saturday, that remained unaddressed Sunday:

— What led to the president’s tweets [Saturday] morning?

— Can you confirm whether this is coming from Breitbart/Levin or whether the president is sharing information about an ongoing federal investigation?

— What evidence does he have that President Obama ordered his phones tapped? Can you please provide a source and an explanation?

— Did he speak to intelligence officials in the government to reach these conclusions?

— Is he confirming that his campaign was under federal investigation and that a warrant was secured to monitor electronic communications from Trump Tower?