Fasten Your Seatbelts: Flight Attendant-Turned-Novelist Shares Stories From The Sky 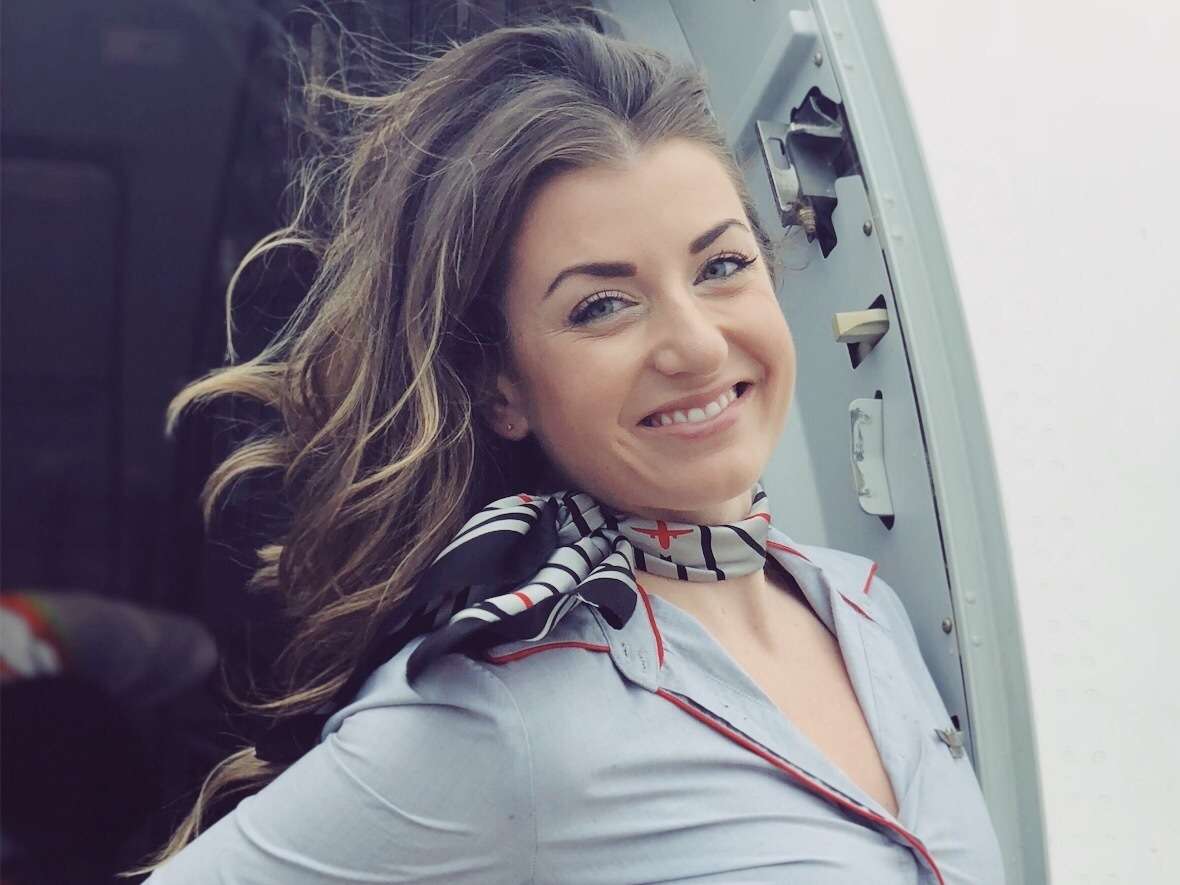 T.J. Newman drew on her experiences as a flight attendant while writing the thriller Falling.

The new novel Falling takes place aboard a flight from Los Angles to New York in which the pilot learns a terrorist plans to kill his family unless he crashes the plane. Author T.J. Newman, who spent 10 years as a flight attendant, says inspiration for the story came to her while she was at work.

“I’m looking out at the passengers who are all asleep … and I have this thought that their lives, my life, my crewmates lives were all in the hands of the pilots,” Newman says. “It was the first time that I thought: With that much power and responsibility, how vulnerable does that make a commercial pilot?”

Newman couldn’t shake the question. She began working on the novel in longhand, jotting down dialogue or ideas on paper napkins in the quiet moments on red-eye flights.

“A passenger would come around the corner [of the galley] and ask for something, and I just sort of flip the paper over and tuck it away, and then when once they were taken care of, I’d pull it back out and keep going,” she says.

Newman transferred her in-flight notes into a single document on her iPad during days off and layovers. Little by little, the book came together.

Though she’s no longer working as a flight attendant, Newman says she would “absolutely” recommend the job to others.

“It’s a phenomenal job where you get to visit great places that you probably wouldn’t otherwise and stay in nice hotels and fly with the best crews,” she says. “That being said, have I spent many days on my hands and knees, scraping up a complete strangers’ vomit? Yeah. I definitely have. It’s not pretty a lot of the time.”

On training for all kinds of disaster situations, from self-defense to hijacking

There’s a misconception that flight attendants are on board for service, that we’re there just to bring you food and drink, and that’s just not true. … If all you see us do is a beverage service, that’s a great day at work because that means that we’re not actually doing our job, because we have training in everything from hazmat to hijackings to medical situations to turbulence to mechanical issues. I mean, we go through an extensive training program and then every year we go through a recurrent training program that is multiple days and has online components as well. We have a manual that’s 800 pages long. … Service is something that is barely even touched on in initial training. It’s just not what we do. That’s not what we’re there for. But like I said, if that’s all you see us doing, that’s that’s a great day. That means I’m not actually doing my job. I’m just delightfully providing service.

On a scary incident during a flight

One of the scariest things was I had a passenger have a complete psychotic break and it wasn’t enough of a medical emergency or physical threat that we diverted, but what it meant was that we had to handle this passenger, who at any moment could turn violent … in a pressurized tube with hundreds of people going hundreds of miles an hour. And I think that it was that sustained tension for hours, while we just tried to manage this situation … I mean, the margin of error when you’re on a plane and you’re on a flight is so small and even something as small as someone having a psychotic break, what could be considered small if it goes well, but if it doesn’t go well, we’re really in a world of hurt.

On feeling close to the crew

I felt that all the time. That’s what it is. You’re in an enclosed environment with a select group of people. And for the period of that flight, whether it’s a quick 45-minute flight or a six-hour cross-country [transcontinental flight], it’s you guys, and you’re all in this together and especially when you face any sort of situation. It just becomes poignant that you’re a little collective group. … That’s how I look at the plane. That’s how I look at a group of passengers. We are a family and it’s a limited time, but for that limited time, it’s us.

On the importance of identifying problem passengers during boarding

Every boarding process, all eyes are on the passengers as they board, both to look for … your hot spots, your potential issues and also to look for your ABP is your able bodied persons, which are people that we will keep in mind if we need to go to seek volunteers in the event that we have some sort of situation and we need strong able bodies to assist us. And that’s how we’re trained to think. We’re constantly looking for those things and especially during boarding. That’s pivotal, because so much of being a flight attendant is about de-escalation, but beyond de-escalation, it’s about spotting a problem before it’s a problem so that we can take care of it before it escalates to a point that is out of our control. And if we can handle a situation like that while we’re still on the ground and the door is open, that’s a far preferred situation.

The most common one is boarding passengers who appear to be intoxicated. And if before you even get on board the flight, I can smell alcohol on you and you’re not walking straight and you’re slurring your speech, we’re really going to have a problem once we’re at altitude and you have another drink and now we’re in an enclosed environment. So in situations like that, it’s always better to have a gate agent come on board and try to handle the situation or remove the passenger. And that happens very frequently.

On passengers looking to the flight attendants during turbulence

It is a pasted-on smile of “nothing to see here, folks.” It’s so funny to me because people seem to lose sight of the fact that we are in a metal tube miles up in the air, traveling hundreds of miles an hour, like it’s a pretty incredible set of circumstances, but people forget it because we’ve gotten so used to it. But the second that plane goes bump, the second that there’s turbulence, all eyes are on the flight attendants. Is this normal? Is this OK? Are we going to be OK? Like, you can read it on their faces, and it’s our duty … [is] to calm and reassure and let people know this is fine, this is fine, we’re going to be fine. Even if in the back of your mind you’re going, “This is a lot there is a lot going on!” … But that’s not what they present to the passenger. When they walk around the galley curtain and they’re in the privacy of the galley, they’re going to be a little bit more casual and off the cuff. But with the public, it is, “We’re fine. We’re under control.”

That’s like a neat flight attendant party trick. I usually can walk up to a row and with fairly decent accuracy, be able to call what a person is going to drink before they order it. … Not just that, you’re going to ask for coffee, but I know how you are going to take it. Oh, you want cream or sugar. The tells are cities. You get to know your destinations very well. Also, if I’m going into Boston, I know my seltzer is gone. Put all the tea bags you have on the cart because they’re going to drink all of it. So you get to know your routes. … We’re trained to read people and to pick up on subtle cues and body language and what they’re wearing and how they’re acting and all of those subtle cues they also add up to something as silly and inconsequential as, “What can I get you to drink?”

Sam Briger and Joel Wolfram produced and edited this interview for broadcast. Bridget Bentz, Molly Seavy-Nesper and Petra Mayer adapted it for the web.