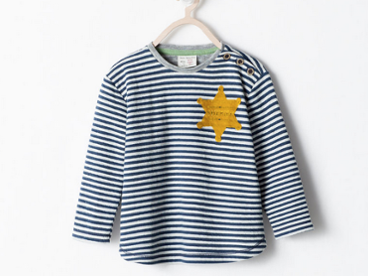 A kids shirt that was for sale on Zara.com.

The clothing retail giant Zara is apologizing and has pulled a kids’ shirt from its stores after hearing complaints that it resembled the uniform worn by prisoners in Nazi concentration camps.

In a tweet, Zara said the shirt was “inspired by the sheriff’s stars from the Classic Western films.”

Reporting from Spain’s Canary Islands correspondent Lauren Frayer tells our Newscast unit that this isn’t the first time the Spanish retailer has gotten into trouble. She filed this report:

“The shirt in question is navy and white striped, with a big gold star on the chest. Zara sold it online in several countries, including Israel.

“The company called it a ‘sheriff shirt’ for kids. But many shoppers thought it looked conspicuously like a World War II concentration camp outfit, and complained on Twitter and Facebook.

“Zara has now tweeted an apology, and says it’s pulling the shirt from its inventory.

“This on the heels of another Zara controversy. The Spanish retailer has been accused of racism for selling T-shirts with the slogan ‘White is the new black.'”

The Guardian points out that back in 2007, Zara was forced to withdraw a handbag from its stores because the design featured swastikas.

One thing that is worth noting is that the six-point star, which looks just like the Jewish Star of David, is embroidered with the word “sheriff.” Also, as Lauren reports, “the shirt’s stripes are horizontal, unlike the ones on prison garb worn by Holocaust victims, which were usually vertical.”