Farmers Are Feeling The Pain As Drought Spreads In The Northwest 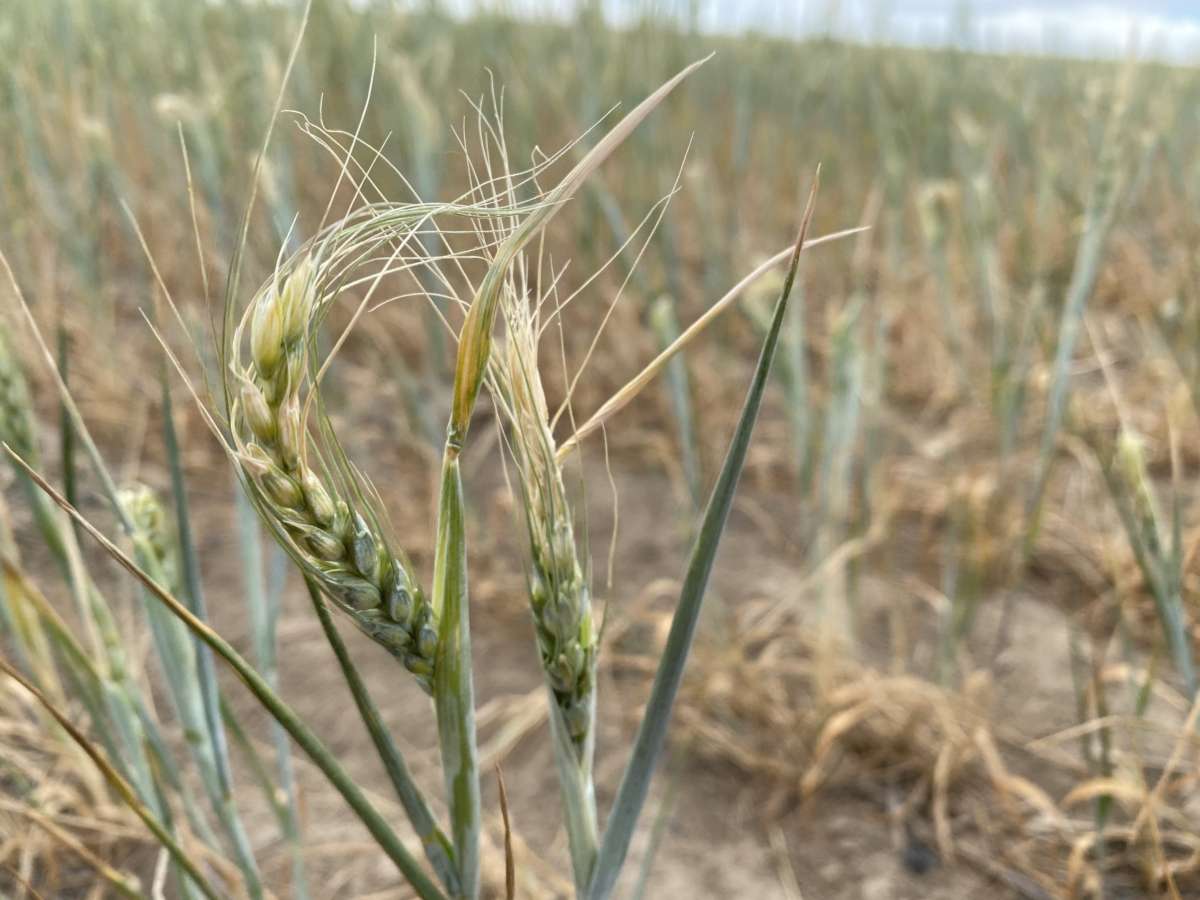 Nicole Berg’s stunted wheat field is so short and sparse she doesn’t think the combine can even reach the wheat without, as she puts it, eating rocks.

“Combines don’t like dirt and rocks,” Berg says, standing amid the damaged rows. “They get indigestion.”

Berg is a dryland wheat farmer in the sweeping Horse Heaven Hills of southeastern Washington state. She shows off one head of half-turned golden wheat amid a sea of them. Besides being too short, the plant’s kernels didn’t fill out properly.

“See how the wheat head is curled like that?” Berg points out. “And then you break into it, you might have some berries down here, but this will be empty. There is no wheat inside the wheat head.”

Northwest farmers like Berg, and ranchers who depend on rain, are expecting what one farmer called a “somber harvest” this year.

Little moisture since February in wide swaths of the region is to blame. And drought is deepening across the West, with federal drought maps showing massive and growing areas of red.

On her ranch, Berg says she’s also worried about 1,000 acres of native grass seeds she has to plant this year into dry soil for a government conservation program. She says with all the Western wildfires in recent years, the wild grass and forage seeds have become expensive. She hates to plant them in shallow, bone-dry soil only to lose the crop if there’s not sufficient rain.

As dry as it’s been in a century

The Berg’s aren’t the only ones suffering. The region is parched from near the Canadian border clear to the edge of Nevada, with triple digit temps on the way making it worse.

Earlier this year, Oregon declared drought zones for eight counties, and six more have requested it since. Now the drought is rapidly expanding into usually cooler and wetter western Oregon, according to Ryan Andrews, a hydrologist for the state’s Water Resources Department. He says the thirsty ground will absorb whatever rain comes, meaning streams and rivers will get little water.

Jeff Marti, a drought expert for Washington’s Department of Ecology, says it hasn’t been this dry since the 1920s.

“For anybody farming right now, they haven’t seen it this dry out there,” Marti says.

He explains that the impact will vary.

“It’s the story of the irrigation haves and the have nots,” he says. “Meaning those folks who get their water from rivers or storage, are probably going to be fine for their irrigation needs. But the dryland users and the folks that have cattle that depend on forage on the rangelands may be more challenged.”

Looking ahead, Marti says the warming climate may mean more rain for the Northwest, but also much less snowpack that melts sooner. That could stress water supplies even more.

“We’re not going to give up”

A bit west of Alderdale, Washington, cattle rancher Gary Hess is also having a hard time with the drought. His grass-fattened mother cows bawl at their calves, wanting them to stay close and away from the cattle dog. But he only has enough irrigated pasture for a small part of his herd, the rest are on dryland range.

So Hess recently sold 70 mother cows with calves at their sides to another operator in Wyoming. They had many more good calves in them, and he hated to see them go. But he has no dryland grass to keep them.

“When you have to sell younger cows, that’s a disappointment,” Hess says as he tears up a bit. “With the kind of weather we’ve had the last couple of years, and the drought and the lack of feed and lack of water, we just finally had to cut back.”

This spring it’s also been windy here, further drying out the landscape like a blow dryer. Hess is thinking he’ll have to sell more cows soon just to survive. He says it’s hard to lose animals and bloodlines that he’s worked so hard to build up. He figures it could take him up to a decade to build his herd back up without going into debt.

“Our family has been here over 100 years, and they’ve been through this before,” he says. “We’re not going to give up.”

Most ranchers say they don’t have time to dwell on the trucked-off cattle or lost crops. They’re busy applying for federal disaster aid. And they’re also keeping an eye out for wildfires that are always top-of-mind in the dry, hot summer, but expected to be worse because of this year’s terrible drought.