‘Far From Over’: Trump Refuses To Concede As AP, Others Call Election For Biden 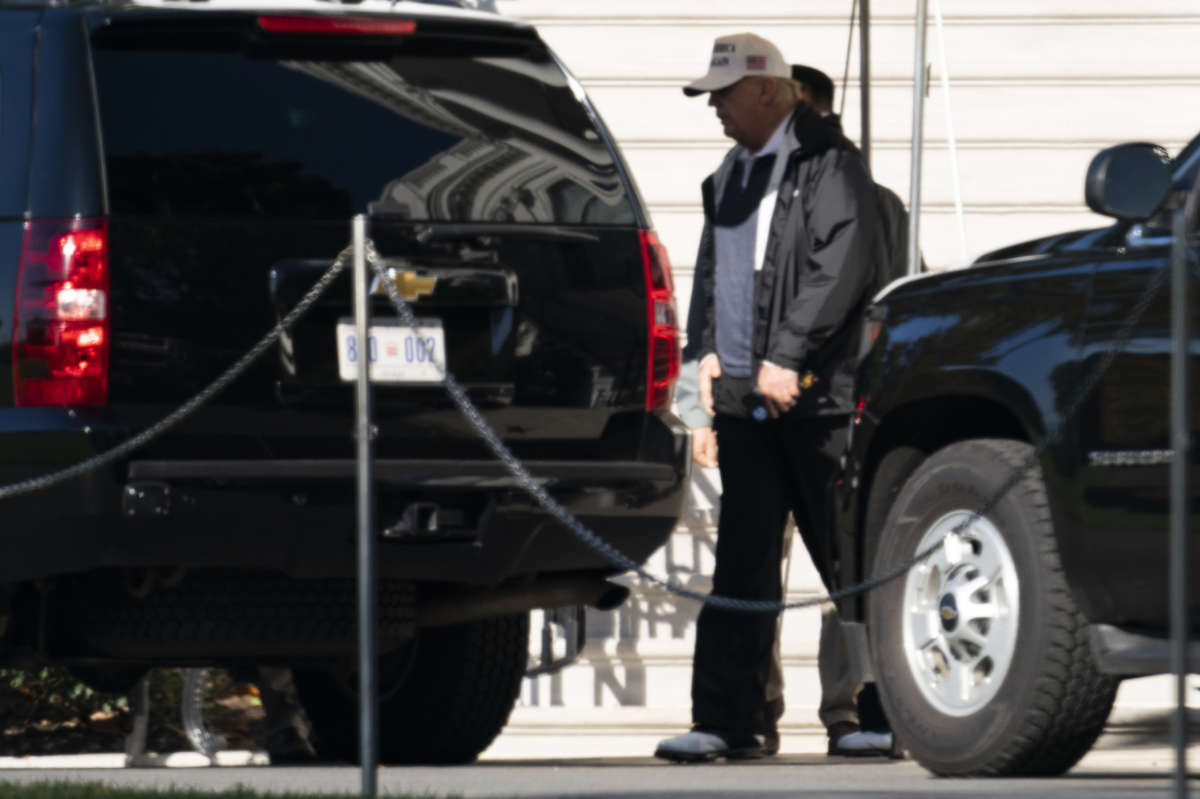 President Trump walks to his vehicle on the South Lawn of the White House Saturday.
Image credit: Evan Vucci

Shortly after the Associated Press and other networks called the presidential election for former vice president Joe Biden, President Trump released a statement continuing to falsely claim that the election was “far from over.”

Trump was at his golf course in Virginia when a slew of networks announced Biden had won the presidency.

Biden reached the threshold of 270 electoral votes needed to win the presidency when networks called Pennsylvania and its 20 electoral votes for Biden. Biden also is ahead in two of the three states that have not been called by the AP and where vote counting continues — Georgia and Nevada. The AP called Arizona for Biden earlier in the week — the count remains close though Biden remains ahead.

“We all know why Joe Biden is rushing to falsely pose as the winner, and why his media allies are trying so hard to help him: they don’t want the truth to be exposed,” Trump wrote in a statement. “The simple fact is this election is far from over. Joe Biden has not been certified as the winner of any states, let alone any of the highly contested states headed for mandatory recounts, or states where our campaign has valid and legitimate legal challenges that could determine the ultimate victor.”

Just a few hours earlier, the president had falsely tweeted that he had won the election, a message flagged by Twitter.

It should be noted that concession speeches don’t have any legal force, and President-elect Biden will be the next president regardless of whether Trump concedes or not.

It’s true that Biden has not been certified the winner by secretaries of state or electors, but the Associated Press and other networks only call a race when they determine the trailing candidate has no possible path to victory.

In the days after the election, Trump pledged to fight on with lawsuits. On Saturday, he said he would continue to battle the results in court.

Of the lawsuits the campaign has filed so far, in states like Georgia and Michigan, judges have tossed the suits, saying the campaign did not present sufficient evidence to back their claims about the integrity of the election.

On Thursday, as Pennsylvania, with its potentially decisive 20 electoral votes, appeared to be moving into the Biden column, the president took the podium in the White House briefing room to once again question the legitimacy of the vote, renewing his unfounded claims of fraud.

Research has found no evidence of widespread fraud, and states with Republican and Democratic election officials at the helm have used the voting method for years without major issues.

“How exciting it is to come before you today with Joe Biden having the tremendous mandate that he has,” she told reporters on Capitol Hill. “And that pretty soon the hyphen will be gone from vice president to President-Elect Joe Biden — a happy day for our country.”

“I’ve already covered the subject,” McConnell said, noting, “I sent out a tweet this morning.” But McConnell’s tweet did not address the president – it said “every legal vote should be counted.” When pressed, McConnell said, “I’ve told you I have sent out what I want to say about this situation in the tweet you all have” and “I get to decide what I say.”

Some fellow Republicans in the Senate have been more direct. In a tweet on Friday, Utah’s Sen. Mitt Romney wrote that the president was “within his rights to request recounts,” but added that it is “wrong to say that the election was rigged, corrupt and stolen — doing so damages the cause of freedom here and around the world, weakens the institutions that lie at the foundation of the Republic, and recklessly inflames destructive and dangerous passions.”

“The president’s allegations of large-scale fraud and theft of the election are just not substantiated. I’m not aware of any significant wrongdoing here,” Toomey said.