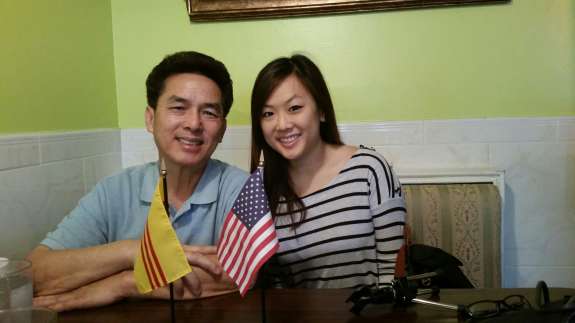 It’s been 40 years since the fall of Saigon and all week we’re looking at Orlando’s Vietnamese population.

Vietnamese cuisine is reflective of Vietnamese lifestyle, starting from the preparation of the food, to how it’s served. That’s what the family that runs Orlando’s Saigon Noodle & Grill says. Owner Thuy Vincent Nguyen was one of the first restaurant owners to settle in what’s called “Little Vietnam,” but now being known as the “Mills 50 District.”

Now, a younger generation is helping to keep the traditional Vietnamese dishes served and satisfying customers at the restaurant, which moved to Goldenrod a couple of years ago.

Dishes from different regions of Vietnam have their own distinct qualities, in part because of climate and lifestyles. But the Nguyen said key elements are fresh ingredients, the perfect amounts of seasoning and broths.

“Pho is such a staple in the Vietnamese culture. It’s one of the dishes that’s recognized widely across the nation, so I’m really proud to be a part of that and able to represent my culture with that significant dish,” said Nguyen’s daughter Krystle, who does the marketing and social media promotion for Saigon Noodle.

Krystle studied at UCF and is former president of the Vietnamese American Student Association. She said in college she always thought she would leave the state after graduation. But she found her identity with the student association and her perspective changed. “My saying is that I would like to stay in Central Florida to help grow the community, as oppose to leave the community.”

Mr. Nguyen said he feels blessed to have his children’s help with the family business and that he’s considering opening another location to take the tastes of Vietnam to other parts of the city.