Liberty University Doubles Down After Falwell Denies Reports Of His Resignation 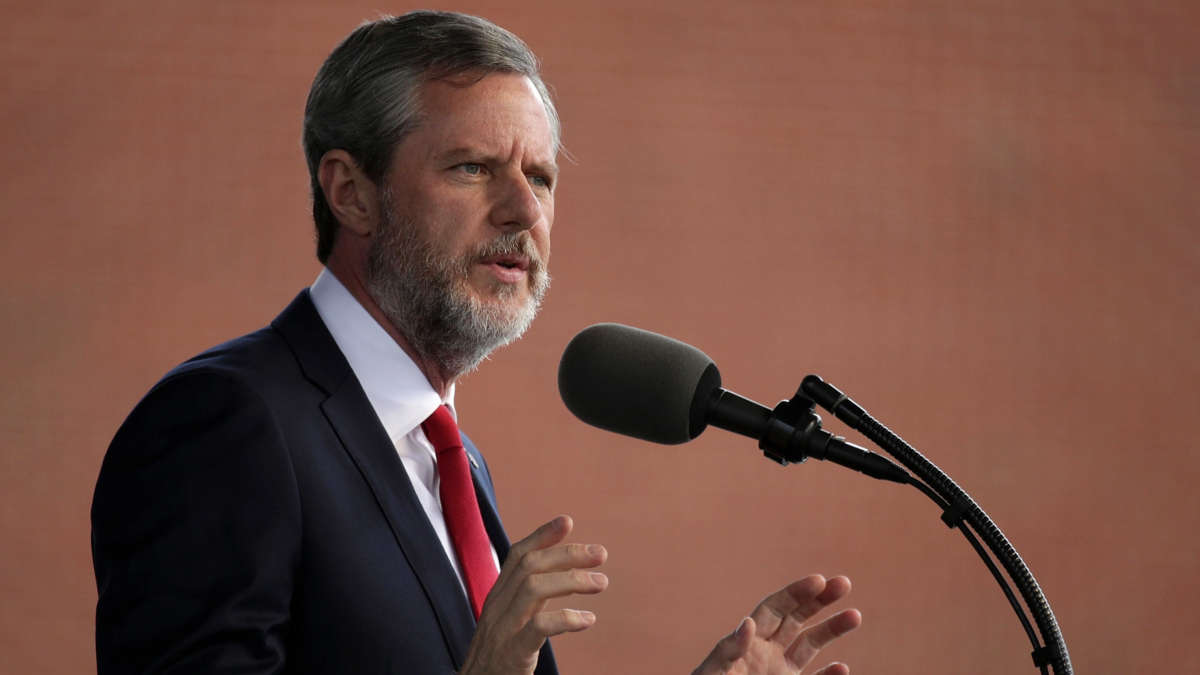 Officials at Liberty University, one of the nation’s largest and most well-known Christian universities, are doubling down after Jerry Falwell Jr. denied reports he’d agreed to step down as president following allegations of sexual behavior at odds with the school’s honor code.

A statement released late Monday evening by Liberty’s spokesman Scott Lamb said that “matters came to light that made it clear that it would not be in the best interest of the University for him to return from leave and serve as President.” Falwell had been on an indefinite leave of absence from the university since earlier this month, after he posted a controversial vacation photo to social media.

The statement said that Falwell initially had agreed to resign immediately as Liberty’s president, but then “instructed his attorneys to not tender the letter for immediate resignation.” It said board members plan to meet Tuesday morning to discuss the matter.

In a text message to NPR late Monday, Falwell said only that things were “still up in the air.”

The latest breech between Falwell and the university founded by his father, the late Rev. Jerry Falwell, comes on the heels of an investigation published by Reuters in which Falwell’s former business partner, Giancarlo Granda, claimed he had a multiyear sexual relationship with Falwell’s wife, Becki, which involved Falwell looking on while the pair engaged in sex acts.

That report was published a day after Falwell released a statement to the Washington Examiner in which he claimed that he had suffered emotional distress over his wife’s affair with his business partner. Falwell described it as a “fatal attraction” situation that included attempts to extort the high-profile couple financially.

Falwell has been at the center of multiple controversies in recent years, including questionable business dealings, accusations of racial insensitivity, complaints about his management style and allegations of other behavior considered inappropriate for the leader of a conservative religious institution.

Previous reporting by news outlets, including BuzzFeed, has described a complicated business entanglement and close friendship between the Falwells and Granda. The couple met Granda in Miami several years ago while he was in his early 20s, working as a pool attendant, according to the reports. The BuzzFeed report also claimed that Trump attorney and fixer Michael Cohen – who has since been convicted of federal campaign violations and of lying to Congress – helped arrange Falwell’s endorsement of Trump. Separately, Reuters has reported that Cohen helped the Falwells arrange to keep private a set of potentially embarrassing photographs.

Falwell agreed to the indefinite leave of absence on Aug. 7 after he posted a photo to Instagram that showed him with his pants unzipped and his arm around a woman who is not his wife, whose pants also were unzipped. In an interview with a local radio station, he said the photo was taken “in good fun” at a costume party and the woman, his wife’s assistant, could not zip her pants because she is pregnant.

Liberty, whose campus is in Lynchburg, Va., holds its students to a strict moral code, which includes prohibitions on sex outside of marriage and same-sex relationships.

Some evangelical Christians critical of Trump, including some Liberty students, have objected to Falwell Jr.’s vocal support for the president since early on in the 2016 Republican primary. His endorsement was seen as an important step toward helping Trump coalesce support from this important Republican voting bloc.

In an interview with NPR in 2017, Falwell was asked for his thoughts about Trump’s moral character. Falwell said evangelical Christian theology is about recognizing that everyone is a sinner in need of forgiveness.

“You can’t go by who’s sinned and who hasn’t, because we all have,” Falwell said. “The ones that you think are so perfect and sinless – it’s just you don’t know about it. They’re all just as bad. We all are. And that’s the bottom line.”