Faith Groups Get Out The Vote For The Midterm Elections 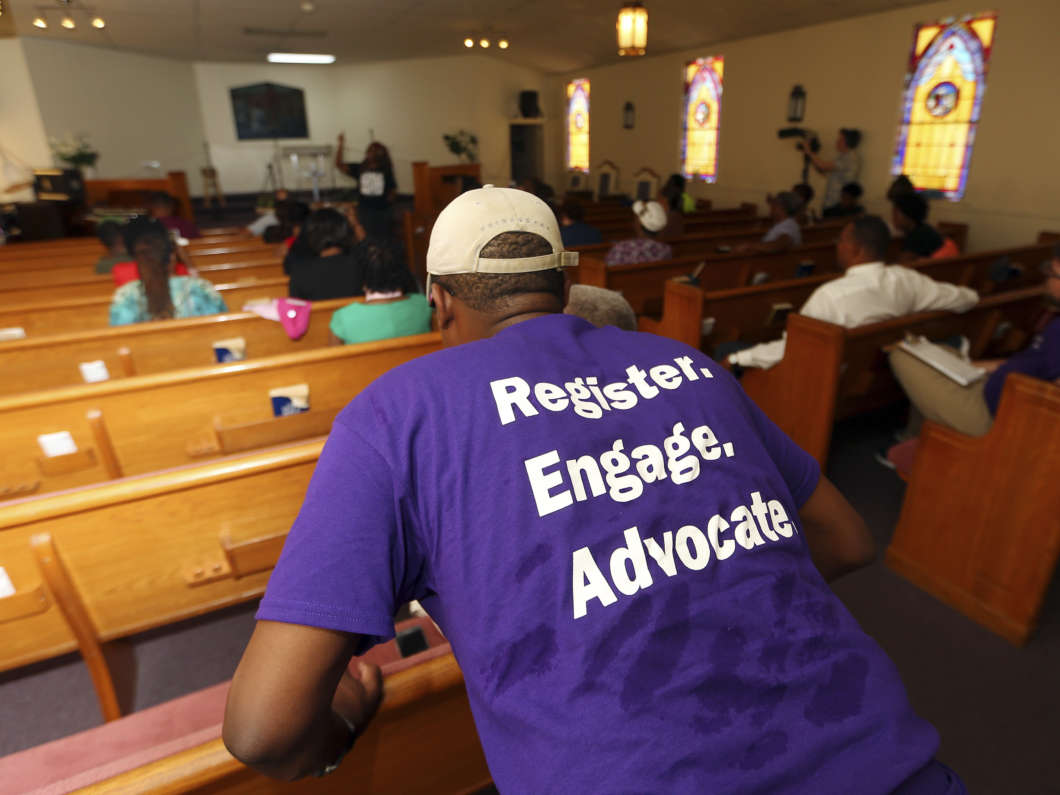 Faith-based groups from both sides of the political spectrum are working to inspire voters for the midterms. A man listens as Black Voters Matter co-founder LaTosha Brown speaks at a church as part of The South Rising Tour, aimed at getting more voters to the polls.
Image credit: John Bazemore

President Trump has prayed with evangelicals in the White House. He’s nominated judges they like to federal courts, and granted their wish of moving the U.S. embassy to Jerusalem. For the president’s evangelical supporters, he has been a godsend.

And now he has a request for them: Get out the vote in November’s midterm elections.

But religious leaders on the left are also inspired to get their people to go the polls.

In the heart of the Virginia Theological Seminary campus, a pub named after the year the flagship Episcopal seminary was established — 1823 — recently hosted a get-out-the-vote event.

The seminary registrar, Rachel Holm, was in the pub, driving home the importance of these midterms elections to the mostly 20- and 30-somethings in the crowd, and livening it up with a game of election trivia.

“So, what are the three topics millennial voters care about most when voting?” she asked.

Then, joking aside, Holm told them to make sure they understood the requirements for registering to vote in Virginia.

Registering students from around the country to vote may be unlike Holm’s day job of registering them for courses, in subjects such as “Pastoral Care” or “Practical Theology.”

But the leadership of this progressive seminary feels called in the Trump era to motivate young voters.

“Because of the 2016 election, I think that a lot of people woke up and saw that the religious right is so organized and so behind this candidate and so maybe we don’t agree with a lot of their positions,” Holm said.

But conservative evangelicals are also rallying voters for the midterms.

Two years ago, when President Trump was running for office and promising to favor conservative values, key evangelical leaders argued that his personal history should be overlooked.

And many conservative voters seem to have done just that. According to exit polls, 81 percent of white evangelical Christians cast ballots for Trump in the presidential election.

“I hope the number is even higher” in November, said Jenna Ellis, public policy director for the James Dobson Family Institute in Colorado Springs, which is running a “Pray. Engage. Vote” initiative ahead of the midterm elections.

Dobson was one of about a hundred evangelical preachers and religious leaders who attended a dinner in their honor at the White House in August. At the event, the president asked them to rally voters in the midterm elections, reportedly warning that if Democrats win they will “will overturn everything that we’ve done and they’ll do it quickly and violently.”

Ellis says she’s concerned what might happen with abortion legislation, or, say, to a baker who refuses to make a cake for a same-sex wedding, if Democrats gain control of the House or Senate and eventually get liberal justices on the Supreme Court.

One Trump promise that excites mainly conservative evangelicals is a repeal of the Johnson Amendment. That amendment is a provision in the tax code that forbids non-profits, such as faith groups, from endorsing or opposing political candidates.

Many other religious leaders oppose a repeal. They don’t want their churches, mosques, synagogues and temples drawn into political campaigning.

Megan Black, a national organizer for the progressive group Faith in Action, says avoiding politics is a luxury they can no longer afford.

“I think that the desire to remove oneself from the political arena especially today, when there is so much at stake for so many people, is a privilege that is exercised inappropriately,” she said.

Black’s group is seeking to reach one million people in person, especially in areas where turnout is traditionally low, and persuade them to vote. For Faith in Action, the main moral issues are voter suppression, immigration crackdowns and police shootings.

Back at the seminary, Dillon Green, a first year student from Alabama, believes in mixing his religion with his politics.

“That’s one of the reasons I’m passionate about voting,” he said. “I want … to say, you know, I believe in Jesus Christ AND I believe in liberal progressive values.”

Green hopes the religious left’s renewed political zeal will yield fruit. But he also recognizes that conservative evangelical efforts to turn out the vote have been more productive in the past.

For both groups, the moral character of the country now hangs in the balance.