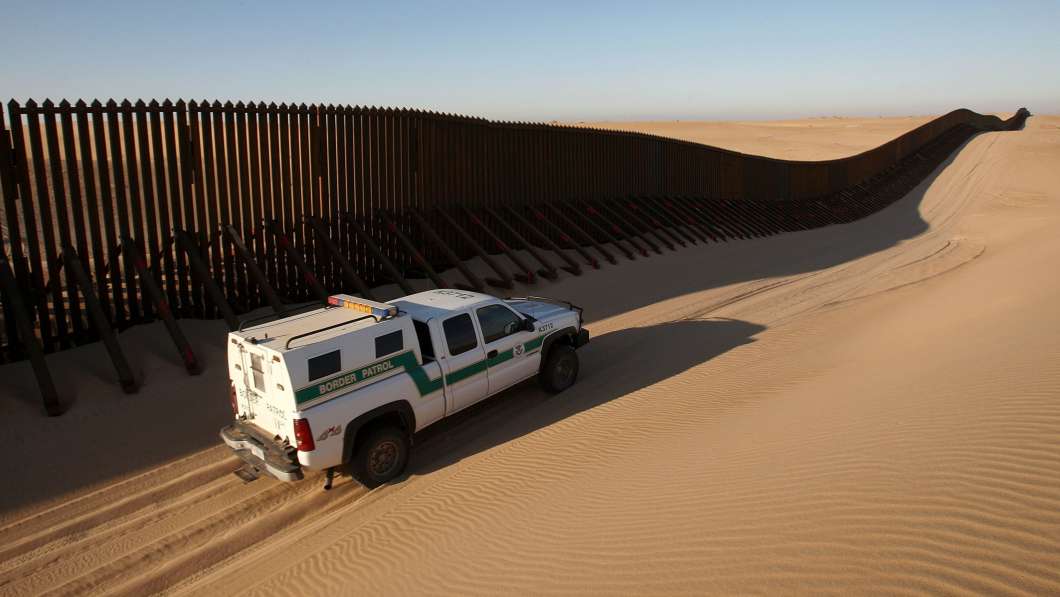 President Trump returns Tuesday night to the same Phoenix convention center where he spoke during the campaign last year, laying out a 10-point plan to fight illegal immigration.

He’s also visiting a U.S. Customs and Border Protection facility in Yuma, Arizona, a few miles from the Southwest border.

Now seven months into his presidency, Trump has pushed for dramatic changes to the nation’s immigration system. But he’s also been stymied by Congress and by the courts.

Here’s a look at what the Trump White House has accomplished on each of those 10 promises — and what it hasn’t.

1. “We will build a great wall along the southern border. And Mexico will pay for the wall.”

The border wall remains more aspiration than reality. The Department of Homeland Security is waiving environmental rules to speed up construction of prototypes near San Diego.But so far, Mexico has balked at paying for the wall. And so has Congress. The House has appropriated nearly $1.6 billion for the first phase of construction, but the Senate hasn’t.

Administration officials say they’re following through on Trump’s promise to end so-called catch and release. That’s how many critics describe the policy that allowed many immigrants to go free until their court dates, which can often be years away because of court backlogs.

In practice, it’s not clear that the Trump administration is handling these cases much differently than previous administrations did.But there has been a dramatic drop in the number of people apprehended at the Southwest border since Trump took office — a 46 percent drop during the first seven months of the year compared to 2016, according to a DHS official. The total for March was the lowest in at least 17 years, although the numbers have started to creep back up since then.

Immigration and Customs Enforcement (ICE) arrests are up more than 43 percent since late January compared to the same period in 2016, according to a DHS official. “We are still continuing to prioritize our resources on those individuals that create and pose the greatest public safety and national security threat,” the official said. 72% of those arrested had criminal convictions, a much lower percentage than the final years of Obama administration.

Trump has pushed Congress for funding to hire more agents for ICE and U.S. Customs and Border Protection. But like funding for the border wall, Congress has yet to sign off.

The Justice Department is trying to follow through on that promise to punish so-called sanctuary cities, which limit cooperation with federal immigration authorities. DOJ made some law enforcement grants contingent on whether those cities do more to help ICE.

But Chicago and California quickly took the administration to court. That’s in addition to lawsuits filed earlier this year by San Francisco, Seattle and other self-described sanctuary cities.

This probably refers to two Obama-era executive actions including DACA, which protects undocumented immigrants who were brought to the country as children from deportation.

The Trump White House dropped its support for a related program called DAPA, which was supposed to help the parents of those children.

But so far, the White House has allowed DACA to continue, much to the dismay of immigration hardliners. Texas and other states are threatening to sue if the administration doesn’t pull its support for DACA by September 5.

6. “We are going to suspend the issuance of visas to any place where adequate screening cannot occur.”

This is part of what Trump’s travel ban executive order was supposed to do.

The order Trump signed just a week after taking office would have blocked travelers from seven mostly-Muslim countries that the administration says are known havens for terrorists.

Federal courts put the original order on hold. But the Supreme Court allowed a limited version of the travel ban to take effect until it can hear legal challenges to the ban in the fall.

7. “We will insure that other countries take their people back when they order them deported.”

Trump pointed out in Phoenix last year that immigrants with criminal records can wind up staying in the U.S. because their home country won’t take them back. The White House has reportedly cut the number of non-cooperative countries from 23 to 12. Immigration hawks say that’s a big win, and that the administration deserves more credit for it.

8. “We will finally complete the biometric entry-exit visa tracking system which we need desperately.”

For years, Congress has required the Department of Homeland Security to create a system to track everyone who comes in and out of the country using biometric technologies like facial recognition or fingerprint scanners.

In recent years, a majority of new undocumented immigrants have overstayed temporary visas, while the number crossing the border illegally has fallen.

Customs and Border Protection is testing a few prototype systems at U.S. airports this summer. But experts say a comprehensive solution that will work at more than 300 land, sea and air ports of entry remains a long way off.

9. “We will turn off the jobs and benefits magnet.”

In the spring, Trump signed an executive order directing federal agencies to “Buy American” and “Hire American,” and urging others to do the same.

But critics point out that Trump’s own companies continue to hire foreign guest workers and manufacture overseas.And just as the White House’s “Made in America” week was underway in July, the administration announced it would allow an additional 15,000 temporary foreign workers.

10. “We will reform legal immigration to serve the best interests of America and its workers, the forgotten people.”

Earlier this month, the White House threw its support behind the RAISE Act, which would prioritize immigrants with valuable skills and high-paying U.S. job offers, and gradually reduce the number of other foreign nationals who can reunite with their families already living in the U.S. But there seems to be little enthusiasm for the bill in the Senate.